The massive shelves of ice that ring Antarctica have been shrinking over the past couple of decades, and that could have grave implications for sea level rise.

It’s not the ice shelves themselves that pose a problem: they’re mostly afloat, so when they melt or dump massive icebergs, it doesn’t affect water levels any more than melting ice cubes make your drink rise and overflow.

But the ice shelves serve as massive barriers that slow the flow of glaciers out to sea. As the shelves shrink, the barrier weakens, allowing glaciers to start moving faster. And since that ice is land-based, it adds to sea level rise. 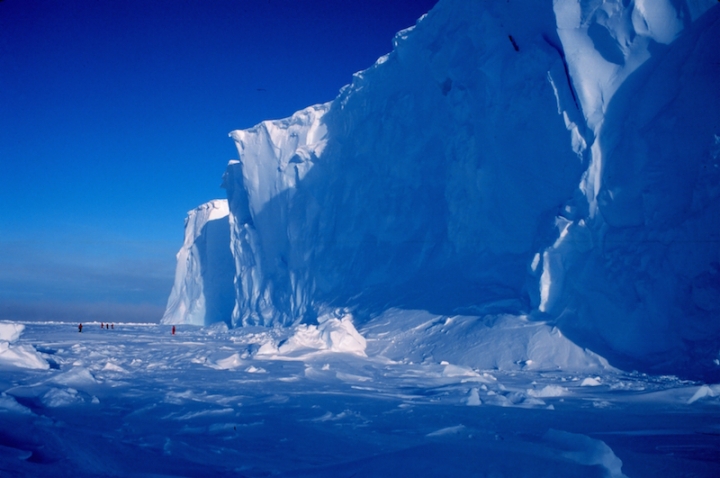 The Ross Ice Shelf at the Bay of Whales. Credit: NOAA

This faster glacial flow has already been documented in several parts of the frozen continent. Now, a new report in Science has identified one more.

Using satellite data from NASA and the European Space Agency (ESA), scientists have shown that glaciers flowing into the sea from the Southern Antarctic Peninsula have sped up markedly since 2009. Collectively, write the authors, these glaciers, most of them unnamed, are now adding enough ice to put an extra 56 billion metric tons of water into the oceans every year.

That won’t add more than the tiniest fraction to the current annual sea level rise of about 3 mm per year (about a tenth of an inch) caused by melting ice worldwide along with sea water that is expanding as it warms. But if glaciers in Antarctica and Greenland keep moving faster as the century progresses, estimates of sea level rise by 2100, which now stand at between 10 and 32 inches at a minimum, may have to be revised upward.

However much the oceans swell over the current century, that figure will come on top of the 8 inches of sea level rise the planet has already seen since 1900. That increase has made storm surges like the one launched by Superstorm Sandy far more devastating than it would have been 100 years earlier. It has also led to increased flooding risk in cities like Baltimore, Philadelphia, Charleston, Norfolk, and Honolulu, to name a few. By 2100, according to one study, as much as $210 trillion in property and infrastructure worldwide, along with tens of millions of people, could be at risk from coastal flooding.

Projections of future sea level rise carry uncertainty because scientists aren’t sure how the vast ice sheets on Greenland and Antarctica will respond to warming. This study is part of the effort to reduce that uncertainty. In this case the scientists didn’t measure the glaciers’ speedup directly. Instead, they measured their thickness, using radar from ESA’s Cryosat-2 satellite to gauge the height of the glaciers’ surfaces above sea level at many different points.

“Cryosat has been doing this for all of Antarctica,” lead author Bert Wouters, of the University of Bristol in the United Kingdom, said. “But we noticed a huge signal in this one little spot that nobody had seen before, so we decided to have a closer look.”

The spot was located on the western side of the Antarctic Peninsula where it joins the main Antarctic continent. The thinning amounted to meters per year in some places, Wouters said.

Thinning can be caused by surface melting, but this degree of thinning couldn’t be explained by melting, he said. It can also happen when relatively fluffy ice on a glacier’s surface compresses under its own weight, but again, that couldn’t have produced such dramatic changes.

In the end, they concluded, the ice must be thinning because it was being stretched by faster glacial flow. NASA's GRACE satellite, meanwhile, which measures changes in the mass of the glaciers, confirmed that the ice wasn’t just being packed tighter. It was actually thinning. 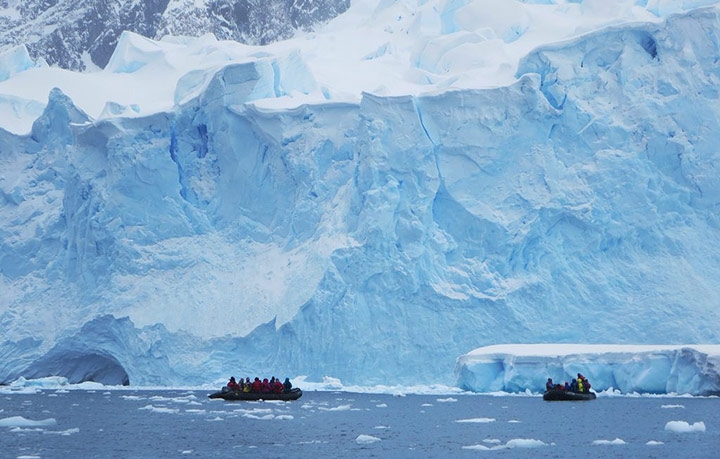 “It’s not totally surprising, based on what we already know, but it’s worrisome,” Eric Rignot, of the University of California, Irvine and NASA’s Jet Propulsion Laboratory, said. Rignot, who co-authored a recent study on the disintegration of Antarctica’s Larsen B ice sheet, was not involved in this research.

The meltback and disintegration of ice shelves in this area, in particular, are more worrisome than most because of the topography that lies under them. The so-called “grounding line” in this part of Antarctica — the point where the ice shelf is anchored to land — is on ground that slopes downward toward the continent’s interior. Scientists generally agree that this and other ice shelves are mostly melting from below, as warm ocean water eats at their undersides.

In a case like this, however, if the ice shelf thins sufficiently, it will float free of the grounding line, allowing warm water to rush underneath and attack areas that were previously protected.

“It’s hard to know, but that could mark a point of no return,” Wouters said. This configuration of ice and bedrock has already been documented in the Weddell Sea, on the other side of the Antarctic peninsula.

“We learn something new every year about Antarctic changes,” Rignot said.

Unfortunately, little of it bodes well for the world’s coastlines and the people who live there.

You May Also Like:
Here’s How Arctic Sea Ice Could Shrink Even More
The ABCs of Antarctic Ice Shelf Melting
Greenland’s Ice Loss May Slow, But Coasts Still At Risk