With this year’s El Niño shaping up to rival the strongest on record, comparisons to the last major El Niño, in 1997-1998, are inevitable. A new animation showing the development of each event side-by-side is the latest example, and provides a window into the similarities and differences between the two climate events.

Those similarities and differences matter because they can affect how an El Niño’s typical impacts on global weather — from drought to deluges — shape up, the reason it receives such rapt attention.

On Tuesday, the World Meteorological Organization declared this El Nino a strong one, and some scientists have noted that sea surface temperatures in a key part of the eastern Pacific are higher than in previous events by this point of the year. Forecasters with the National Oceanic and Atmospheric Administration and Columbia University said in their August update that temperatures in that region could reach more than 3.5°F above normal when this event peaks in the winter, something only recorded three times in the 65 years of record-keeping, including the 1997-1998 event (as well as 1982-1983 and 1972-1973).

With the inevitable comparisons between this El Niño and the 1997-1998 event — remembered for the incredible rains and mudslides it brought to California (along with Chris Farley’s memorable Saturday Night Live sketch) — Matt Rehme at the National Center for Atmospheric Research’s Visualization Lab, worked up an animation showing the progression of each event from January through August.

“I was a little shocked just how closely 2015 resembles 1997 visually,” Rehme said in a statement.

But as any El Niño researcher will tell you, no two El Niño events are alike, and the impacts from this one aren’t guaranteed to be just like 1997-1998.

The most obvious difference between this year and that event, clearly visible in the animation, is the “blob” of warm water off the west coast of North America, a symptom of the relentless high pressure pattern that has kept the West hot and dry over much of the last few years and led to the deep drought in California.

Right now, it is unclear how this warm patch will interact with the typical El Niño impacts (which aren’t guaranteed to materialize). That warmth could mean that any storms that hit drop more rain instead of much-needed snow that could help replenish depleted reservoirs. 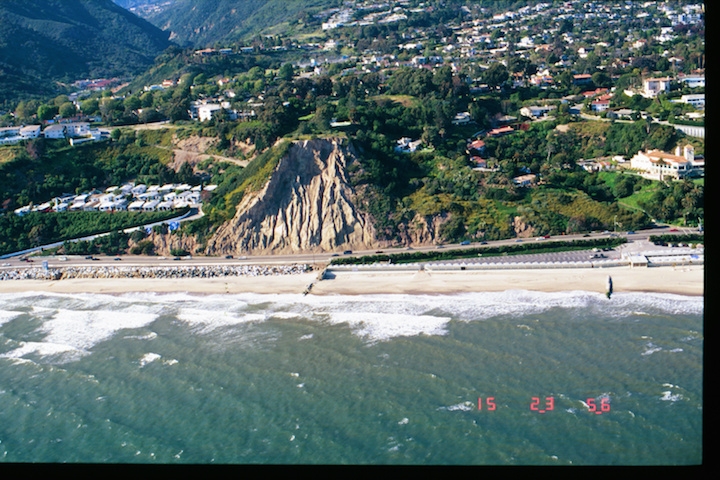 An aerial view of a mudslide along the Southern California Coast just north of Los Angeles, taken in April 1998.
Click image to enlarge. Credit: USGS

Another difference is that “in 1997, there was no ‘peek-a-boo’ with El Niño the winter before it really got going,” as there was this past winter, Michelle L’Heureux, a NOAA El Niño forecaster, said in an email. The early months of 1997 started off relatively cool in the eastern tropical Pacific, “so the fact we have this strong El Niño … following earlier tropical ocean warmth is unique,” she said.

Also, the warmth that has built up so far this year, while reaching impressive heights in part of the eastern Pacific, hasn’t reached the very far eastern Pacific right at the coast of South America yet.

“It's certainly warm, but not yet on par with 1997/98,” L’Heureux said, which affects predictions for El Niño impacts in Peru.

So while it’s interesting to compare this El Niño to other events, and doing so helps researchers learn the range of variation El Niño can exhibit, just how the impacts shape up this year are a matter of waiting to see what winter brings.