As go toucans, spider monkeys and tapirs, so goes the climate.

Put another way, the hunting and poaching of tropical animals could change the face of rainforests such as the Amazon, diminishing their ability to store global carbon dioxide emissions by up to 20 percent. 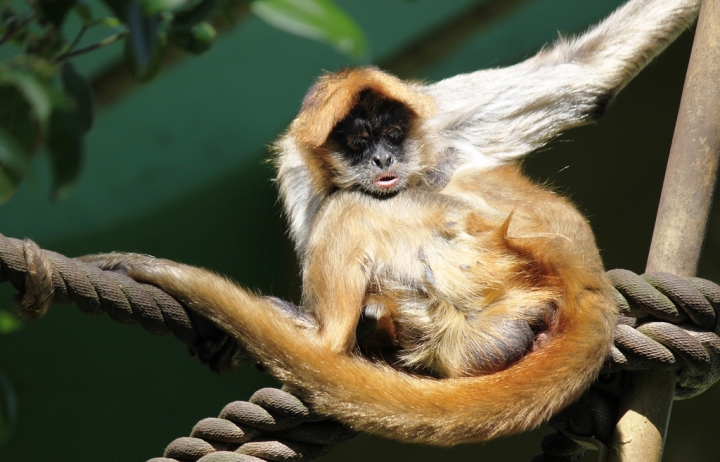 Spider monkeys are threatened by hunting and poaching in tropical forests.
Credit: OZinOH/flickr

Those are the findings of research published Friday by a team of scientists at Sao Paulo State University in Brazil showing that the decline of large animals in tropical forests may be directly connected to the Earth’s ability to withstand climate change.

Tropical forests, especially the Amazon, Brazil’s Atlantic forest and Africa’s tropical rainforests, are the earth’s largest and densest natural carbon sinks. These forests act as the lungs of the earth, inhaling more than 25 percent of humans’ carbon dioxide emissions and storing them in tree trunks and roots.

Defaunation may reduce a tropical forest’s ability to store carbon by between 5 and 20 percent, depending on the tree species that compose the forest in a given area, Galetti said. More research is needed, however, before scientists can quantify the full effects of defaunation, he said.

Scientists unaffiliated with the study said it provides even more evidence that biological diversity and healthy forest ecosystems are critical to a healthy climate.

José Maria Cardoso da Silva, an environmental geography professor at the University of Miami, said many studies, including some of his own research, have been published over the last 15 years showing that big, carbon-dense trees could go extinct without the large animals that spread their seeds. 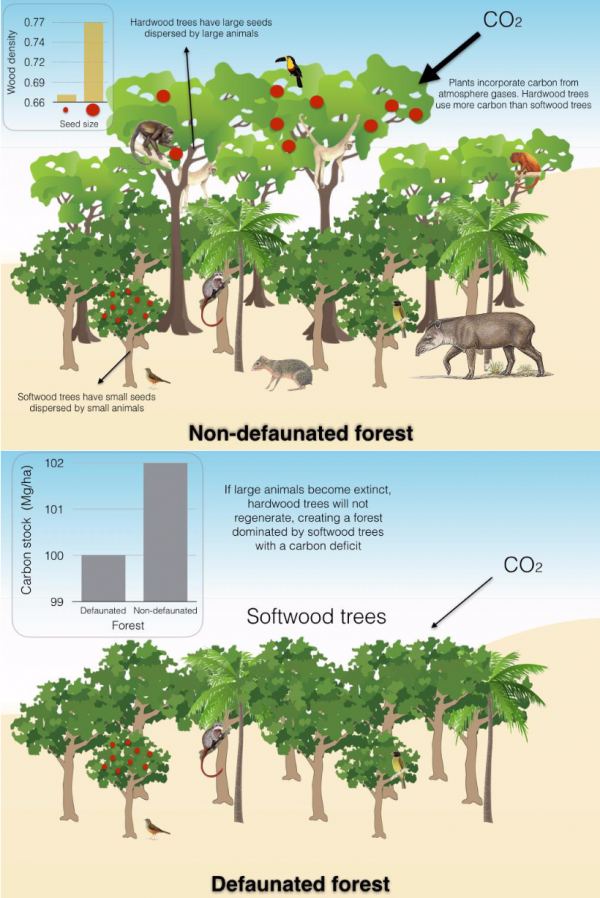 “We demonstrated that by eliminating the big frugivorous birds, the big trees in the region will move towards extinction,” Silva said. “All studies afterwards have confirmed the trend. (Bello and Galetti’s) paper adds one more step to the chain. It shows that if the big trees go extinct, then the capacity of the forest to store carbon is reduced. If forests cannot store carbon in the way that they usually did, then the negative effects of climate change can be exacerbated.”

Matthew C. Hansen, a remote sensing scientist and geography professor at the University of Maryland, said the study is “compelling and important.”

He likened its results to the improvement in biological diversity and density of trees in Yellowstone National Park after wolves were reintroduced there. It shows that each part of an ecosystem is dependent on another, and if one is removed, the effects spread to other ecosystem functions and result in unintended consequences.

“The study shows that we cannot look at carbon stocks in isolation,” Hansen said. “We will also need to value ecosystem co-benefits to carbon and account for them in our management of forests moving forward.  Either the rainforests, as ecosystems, are important or they are not – a narrow carbon-centric management goal may not in fact be viable for fully realizing the stated goal of climate change mitigation.”

Francis Putz, a biology professor at the University of Florida, said small animals such as bats could prevent some of the tree extinctions the study forecasts, and it’s more likely some large tree species will grow in different places than they do today rather than go extinct.

However, “recognition of the proposed link between defaunation and forest carbon sequestration should serve to keep proponents of forest-based climate change mitigation interventions from disregarding wildlife,” he said.

You May Also Like:
Five Reasons to Smile About Paris Climate Talks