America’s Sickest Wetlands Are in the West, EPA Finds

Few people will see the marshland that Beth Moseley helps spruce up during her volunteer outings to an industrial stretch of bayfront. Its hidden solitude from San Francisco’s hustle and bustle is one of the reasons she often visits the restored wetland to watch birds.

“Most of the work we do is pulling weeds,” said Moseley, a 61-year-old resident of the city’s Mission district, who has been joining the Audubon Society’s monthly work days at the Pier 94 wetland for several years. “It’s kind of like the bay is taking care of itself.”

The fruitful growth of the salt marsh over the last decade offers a germ of briny hope in a region where wetlands have been paved, diked and invaded by weeds at a rate unmatched elsewhere in the U.S. 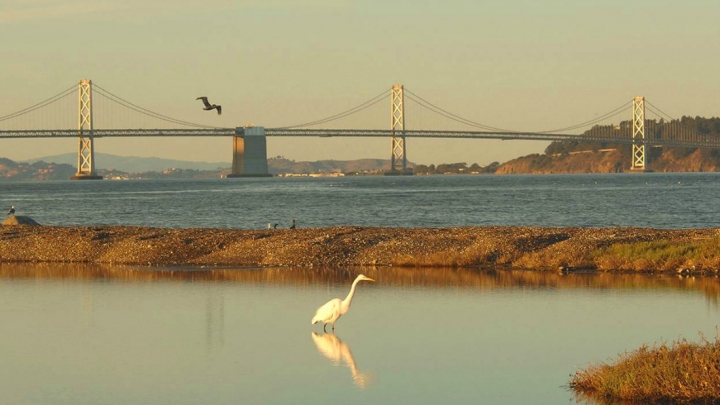 An exhaustive assessment released by the EPA this month based on more than 1,000 wetland surveys conducted in 2011 concluded that while nearly half of the remaining wetlands in the Lower 48 are in “good” condition, just one-fifth of the wetlands in the West are doing that well.

The findings portend problems nationwide as seas rise, with planners valuing the respite that coastal ecosystems can offer from floods and erosion-inducing waves. The 119-page assessment contained particularly bleak news from the West, where wetlands are the least widespread and in the sickliest condition overall nationwide.

Drainage projects, dams, paving and invasive species are so rife though the West’s remaining wetland areas that the EPA found three-fifths of them in “poor” condition. In none of the other three regions did the EPA find more than two fifths of the wetland area to be in poor condition, which was the worst of three scores assigned to wetlands.

The assessment analyzed coastal mangroves and marshes as well as mountain meadows, bogs and other ecosystems straddling water and land.

Half of the 220 million original acres of wetlands growing hundreds of years ago in the Lower 48 have been destroyed, agencies have estimated. That destruction was not captured by the EPA’s new assessment.

“We only assessed sites that were existing wetlands in 2011,” EPA spokeswoman Monica Lee said in an email. “To properly put the results of (the assessment) into context, it’s useful to remember that approximately 50 percent of wetland acreage has been lost.” 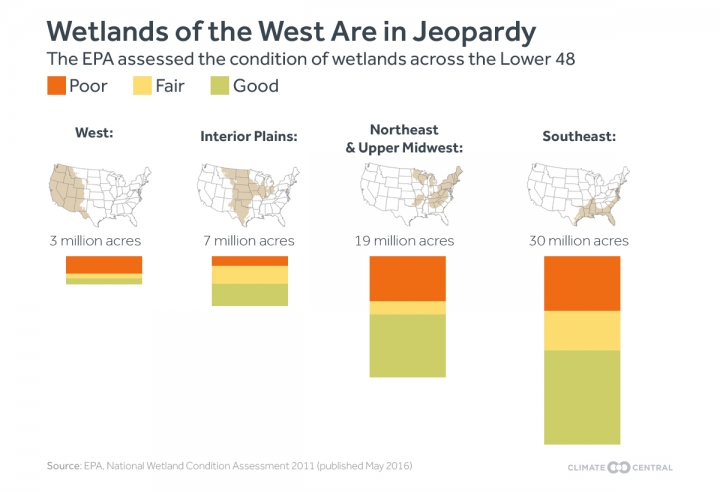 By growing taller as seas rise, marshes and other wetlands are increasingly being valued for their ability to buffer worsening floods and waves as the climate changes. Seas rose about half a foot last century and are rising more quickly now as climate change worsens. Seas may rise two to six feet this century, creating unprecedented problems for coastal communities.

As well as helping to combat the effects of rising seas, wetlands filter pollution from water, provide habitat for salmon and clapper rails and keep carbon dioxide out of the atmosphere — slowing global warming.

In California, the destruction of wetlands has been even more severe than in the rest of the country. An estimated 90 percent have been lost from the Golden State in less than two centuries. The causes of the spectacular decline of the wetlands of the West are rooted in a happenstance of geography and urban and industrial development.

Steep and jagged Western seasides naturally contain fewer wetlands than flatter American regions. Many of the West’s few marshlands were concentrated along the riversides and banks of San Francisco Bay, which is part of a vast estuary. Those banks have been paved over and built upon as the Bay Area population has swollen quickly in recent decades to beyond 7 million. 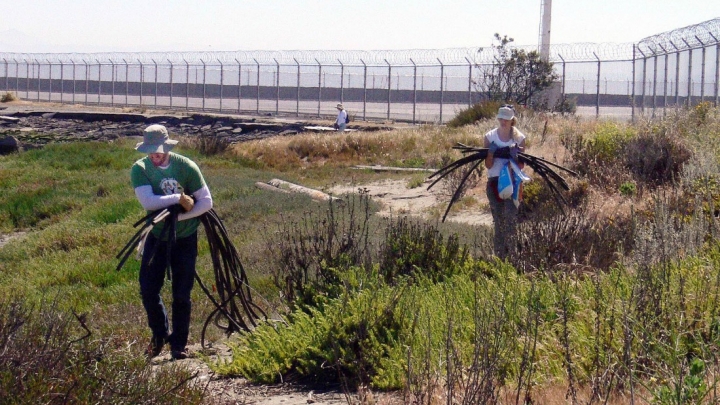 “That’s one of the most urbanized estuaries in the country — if not the world,” said Lisa Schile, a Smithsonian Environmental Research Center coastal ecologist who is based in Nevada and works nationwide. “There’s a squeeze that’s happening with the wetlands. There’s just a finite area.”

Ships berthing at busy ports throughout the bay are constantly introducing invasive species. That has left the region with some of the worst infestations of wetland weeds anywhere in the country. Nonnative plants were found at high levels in 72 percent of the EPA’s wetland surveys in the West.

“At certain times of the year, a whole different kind of weed takes over,” said Moseley, the volunteer. She said Pier 94 wetland volunteers plan to battle infestations of invasive sea lavender during their next monthly outing. “It just grows like crazy.”

The Bay Area’s marshes may have been badly battered, but its residents and leaders are also leading the nation in working to restore them. 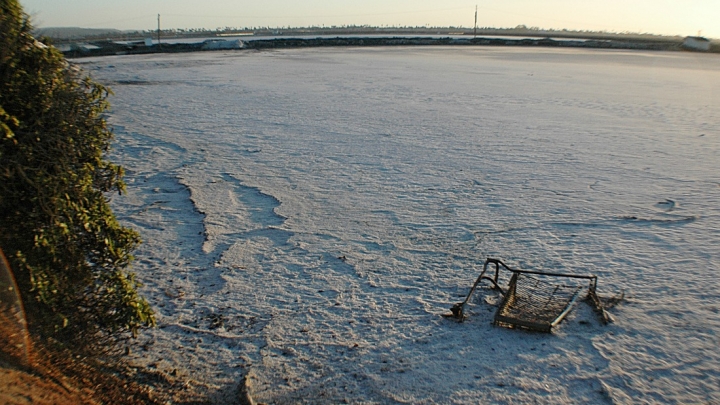 Marshes south of San Francisco were destroyed to produce ponds for harvesting salt. Some are now being restored.
Credit: Martha Jimenez/flickr

The findings from the EPA’s new assessment didn’t surprise scientists, who already work closely with damaged wetlands and have front row views of the damages catalogued in the new report.  “It serves to inform policy makers in Washington” said Carl Hershner of the Virginia Institute of Marine Science. “It does serve to raise the level of awareness.”

The Pier 94 wetland restoration was a small project. The marsh began growing naturally after a shoreline on Port of San Francisco property slumped into the water. The emergent marsh was fostered a decade ago by a public project that cleared away paving, tires and other heavy trash, helping plants take root.

The volunteers are constantly picking up trash that’s been freshly deposited on the resurgent wetland. “It’s really special to kind of see how it’s transformed itself,” Moseley said.

On a grander scale, levees are being punctured and salt-harvesting ponds are being returned to nature from the North Bay to the South Bay in an effort to restore marshlands, generally on waterfront property owned or purchased by a public agency. Bay Area voters are considering introducing a new property tax to help fund the work.

Bay Area agencies in 1999 published a vision of restoring 100,000 acres of tidal marsh. Since 1999, restoration work has begun and in some cases finished on 42,000 acres, state figures show. A recent science report commissioned by California cited an imminent rise in rates of sea level rise in calling for the work to be urgently accelerated.

Measure AA, which would create a new $12 a year parcel tax in the nine Bay Area counties to help fund wetland restorations, shares a ballot with California’s presidential primary election next week. The measure is being supported by an alliance of the region’s business and conservation groups, but opposed by some conservatives, who say the structure of the tax would be unfair.

Moseley visited City Hall last week and voted in favor of Measure AA — which would impose the proposed new fee on her landlord if two out of three voters cast ballots in its favor. “I certainly would be glad to give $12 for this,” she said.

You May Also Like:
Abrupt Atlantic Ocean Changes May Have Been Natural
Acidifying Waters Put Dungeness Crabs at Risk
Africa’s Most Vulnerable Face an Even Hotter Future