The federal government will need to ramp up its fight against climate pollution if it wants to keep a key promise under a United Nations pact, new research from the Lawrence Berkeley National Laboratory shows.

The U.S. pledged during United Nations meetings in France last year to reduce its greenhouse gas pollution by a little more than a quarter in 2025, compared with 2005. When it comes to living up to this commitment, the research showed current rules and policies alone would be insufficient. 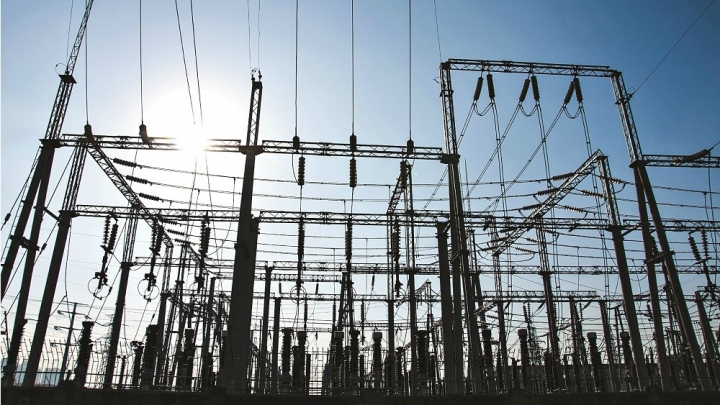 A transition to cleaner alternatives for America's electrical grid will need to accelerate if the nation is to live up to its international obligations.
Credit: U.S. Department of Energy/flickr

“Federal climate policy is falling short of the United States' pledge in Paris — and not by a small amount,” said Danny Cullenward, a Carnegie Institution for Science researcher who helped the national lab scientists develop their study.

Less than a year after it was negotiated, the Paris Agreement is poised to take effect. Even if all countries keep all promises made under it, the goal of keeping global warming to well below 2°C (3.6°F) isn’t expected to be achieved. Efforts are being made to improve national pledges in the years ahead.

The research published Monday in the journal Nature Climate Change comes one day before the opening of an important chapter in a sprawling court battle that will decide the fate of America’s most important suite of climate change regulations — the Clean Power Plan, affecting power plants.

“I don't envy those planning climate policy,” Cullenward said. “They’re caught between fierce opposition to the Clean Power Plan and the knowledge that federal climate efforts need redoubling if the U.S. is to fulfill its Paris promise.”

The researchers analyzed federal projections for energy industry changes and the likely effects of climate rules that have been put in place by federal and state agencies. They projected that greenhouse gas emissions would fall nationwide by the equivalent of 300 million to 350 million tons of carbon dioxide in 2025, compared with 2005.

Living up to America’s new international commitment would require reducing greenhouse gas pollution by about 1,000 million to 2,000 million tons of carbon dioxide in 2025, the researchers calculated. That means existing climate rules are not enough.

“We had projections of where greenhouse gases would be in 2025 in the absence of any policies,” said Jeffery Greenblatt, a Lawrence Berkeley National Laboratory researcher who led the analysis. “Then we layered on reductions that would occur from these policies.”

Finding a scenario in which the lower bound of America’s pledged pollution reduction could be achieved took a lot of creativity, requiring the researchers to consider climate policies that were previously rejected or that haven’t been formally proposed.

If the power plant rule survives court challenges, and if a long list of proposed and suggested policy ideas become reality, the researchers found the U.S. may reduce its emissions by 1,200 million tons in 2025. That might or might not be enough to keep America’s promise to the world.

Karl Hausker, an analyst at the nonprofit World Resources Institute who researches American climate policy, said the findings corroborated findings by himself and others — and he said they come as America finds itself at a “huge fork in the road.” 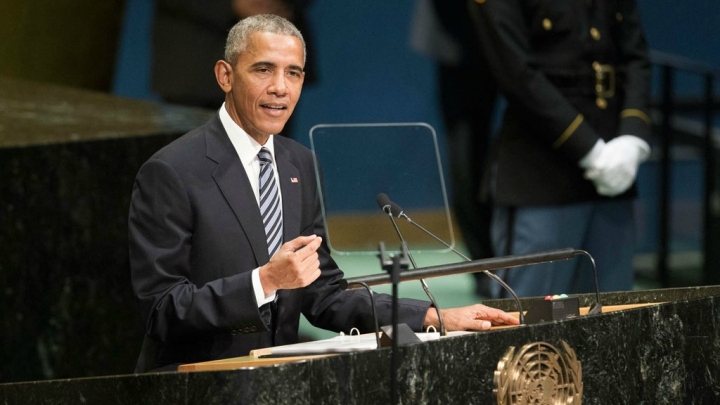 During his final address to the U.N. General Assembly last week, President Obama warned of the dangers of climate change.
Credit: U.S. Department of State/flickr

Whichever presidential candidate wins the November election will have sweeping influence over the future of American climate policy. Individually, Americans are some of the world’s worst climate polluters. Efforts to address their impacts affect global policy and temperatures.

The world is set to break a temperature record in 2016 that was set in 2015, which broke the mark set one year prior. August was the hottest month ever recorded, equaling the record set in July. Rising temperatures are making heat waves, storms and floods worse.

Democratic presidential nominee Hillary Clinton has embraced the fight against global warming started by President Obama. Republican nominee Donald Trump has vowed to end it, such as by disbanding the EPA and abandoning international commitments.

Polluting industries and conservative states are suing the EPA in an attempt to overturn its new power plant rules, arguing that the agency overstepped its legal boundaries. The rules haven’t taken effect yet, but they’re the linchpin of American climate policy.

The U.S. Court of Appeals for the District of Columbia Circuit will hear opening arguments in the case Tuesday, with an eventual ruling likely from the Supreme Court. A judicial appointment by the next president could tip the Supreme Court against or in favor of environmental regulations, such as the Clean Power Plan.

“The target the U.S. has put forward — it’s ambitious, but it can be done,” Hausker said. “There are more steps to be taken. The next president, for it to be successful, will have to continue to move forward.”