America’s Future Has Wind in its Sails

Wind turbines have only a tenuous link to most Americans’ daily lives because wind farms generate less than 5 percent of all of the electricity produced today.

As reducing greenhouse gas emissions to slow a changing climate becomes more urgent, though, wind is expected to become one of the country’s largest sources of energy by mid-century. The U.S. Department of Energy has published two new maps that put that future in more concrete terms.

Projected growth of the wind industry over the next 35 years.
Credit: Department of Energy

The estimated growth is dramatic: The map shows total U.S. wind power capacity growing from about 40 gigawatts — enough power for about 10 million homes — in 2010 to more than 400 gigawatts in 2050. That would be enough to power nearly 100 million homes.

The map also shows how wind power generated in the U.S. is likely to change as much as it grows in the coming decades. That’s because offshore wind farms could produce an increasing amount of electricity in the U.S. beginning later this decade.

Energy Department estimates show that wind power in some states will come only from offshore wind turbines. Rhode Island, for example, is expected to generate about 2 gigawatts of wind power in 2050, all of it coming from twirling turbines in the open ocean.

Most coastal states are expected to generate wind from both offshore and onshore turbines. But there are exceptions: South Carolina, where the federal government is now drawing up plans for offshore wind development areas, is estimated to generate 8.5 gigawatts of electricity from wind, all of it offshore. Other states that could see wind farms exclusively offshore include Florida, New Jersey and Connecticut.

The maps shows plenty of wind growth in states such as Georgia, Alabama and Mississippi, that produce little or no wind power today.

That leads into the next Energy Department map, “Unlocking Our Nation’s Wind Potential,” which was published this week along with a new report showing that there is wind power potential in nearly the entire U.S., most notably in places where the breeze was thought to be too calm to generate much electricity at all. 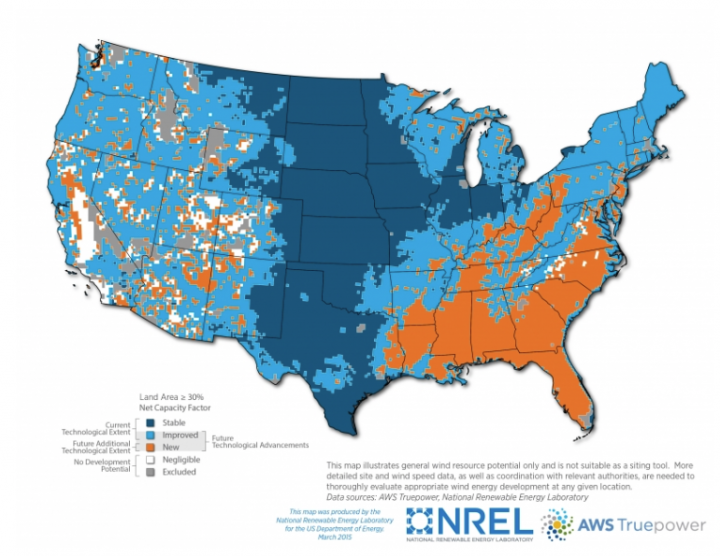 Those places represent a major chunk of the U.S., mainly in the South, shown in orange on the map.

The idea is this: The wind usually blows harder at higher altitudes, so taller wind turbines with blades longer than those most commonly manufactured today could capture the wind more effectively as it blows high above the loblolly pines and Southern magnolias in Mississippi, Alabama, Florida, Georgia, and parts of the Ohio River Valley and the calmer parts of California’s Central Valley.

Those turbines would tower up to almost 500 feet above the ground — much taller than most wind turbines built today, which usually stand at about 260 feet.

In other words, come 2050, wind turbines could be almost as much a part of the view above Mississippi’s Natchez Trace Parkway as they are today all across West Texas.

You May Also Like:
U.S. Emissions, Economic Growth Headed Toward Divorce
Global Warming Could Threaten 1-in-6 Species
Tornadoes by State
Texas, Oklahoma Drought ‘All But Over’