Blooms of algae in the Arctic Ocean could add a previously unsuspected warming feedback to the mix of factors driving temperatures in the north polar regions up faster than any other place on the planet, according to the authors of a new study in Proceedings of the National Academy of Sciences.

“By the end of the century, this could lead to 20 percent more warming in the Arctic than we would see otherwise,” said lead author Jong-Yeon Park, of the Max Planck Institute for Meteorology, in Hamburg Germany.

Average temperatures in the region are already 2.7°F higher than the 1971-2000 average — twice as much as the warming seen in other parts of the world. Even without this newly identified algae feedback, summer temperatures in the region could be as much as 23.4° F warmer in summer than they were before human emissions began in the 1800s. Add 20 percent to that and you’re up to 28° — a level that could thaw permafrost drastically, and release even more heat-trapping CO2 into the air. 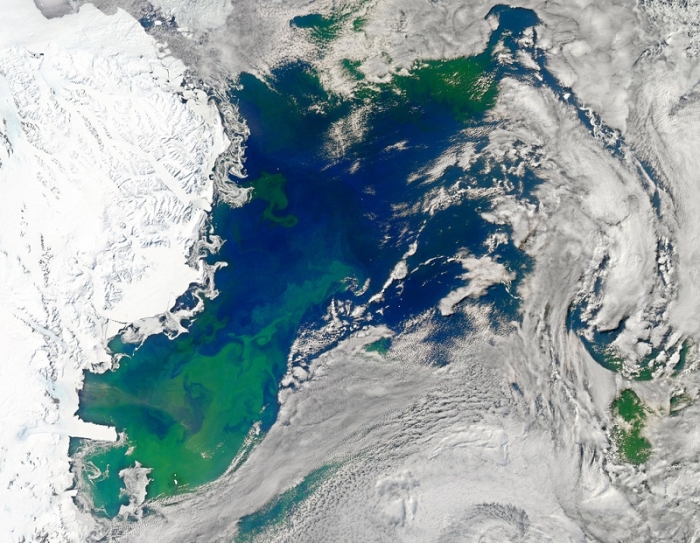 This true-color image captures a bloom in the Ross Sea on January 22, 2011, as viewed NASA’s Aqua satellite. Bright greens of plant-life have replaced the deep blues of open ocean water.
Credit: NASA

There’s no question that algae blooms are on the increase as Arctic ice thins. Scientists have generally believed that more algae — more specifically, the type known as phytoplankton — would be good for the climate, since they thrive on CO2 while alive, then carry the carbon they’ve absorbed down to the sea bottom when they die. Some experts have even suggested that fertilizing the oceans to encourage algal growth would be one way to counteract global warming.

But Park and his co-authors point out that thicker layers of algae on the sea surface would prevent sunlight from penetrating deeper into the water.

“More heat is trapped in the upper layers of the ocean, where it can be easily released back into the atmosphere,” Park said. He and his team reached this conclusion by marrying computer models of how ocean ecosystems behave to models that simulate the climate. Then they ramped up levels of CO2 to see how the algae would respond to the resulting warming, the extra carbon dioxide itself, and changes in sea ice.

The analysis makes sense, according to independent scientists — up to a point, anyway.

“The authors show that phytoplankton plays a role in the vertical distribution of solar energy reaching the Arctic Ocean,” Mar Fernández-Méndez, a sea-ice biologist at the Max Planck Institute for Marine Biology, in Bremen, Germany, said. “But while the study is credible, it’s based on model results, not observations.”

That being the case, Fernández-Méndez said, any incorrect assumptions in the model would lead to an incorrect conclusion. The particular model Park and his colleagues used, she said, is not specifically designed for the Arctic, where a number of factors could skew the results. 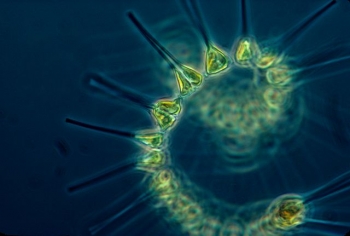 Scientists have generally believed that more phytoplankton, which thrive on CO2 while alive, would be good for the climate.
Credit: NOAA

One, which the authors themselves note, is that the warming of the Arctic Ocean that is already happening could trap nutrients in deeper, cooler layers that would make them less available to feed algae blooms. Another is that an increase in Arctic cloud cover — a plausible outcome of global warming, which promotes evaporation from the oceans — could deprive algae of the sunlight they need to thrive. Nevertheless, said Fernández-Méndez, “the results stress the importance of taking biological processes into account in climate models.”

This study, like virtually all research that breaks new ground, is hardly likely to be the final word on the matter.

“This aspect of climate change has not been adequately modelled in the past,” said Victor Smetacek, of the Alfred Wegener Institute for Polar Research, in Bremerhaven, Germany. The new study, he said, is an important step in the right direction.

You May Also Like:
Thawing Permafrost Will ‘Seep, Not Explode’ CO2
Major Greenhouse Gas Reductions Needed by 2050: IPCC
CO2 Emissions Expected to Rise Significantly by 2030