All three of the U.S. geostationary weather satellites — which provide most of the satellite images seen on your nightly TV weathercast — are back in service after a “micrometeoroid” caused one of the satellites to shut down on May 22. The shutdown forced the National Oceanic and Atmospheric Administration (NOAA) to maneuver a backup satellite into place to ensure a nearly continuous supply of weather data and imagery over the eastern U.S. and the Atlantic Ocean. 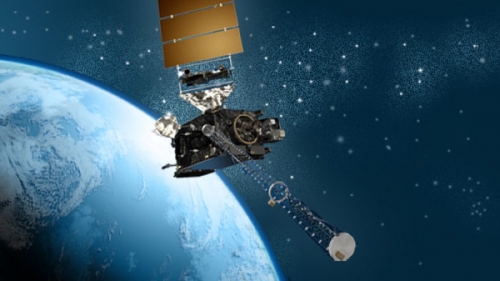 An image showing the design of the next-generation of GOES weather satellites, known as GOES-R.
Credit: NOAA/NESDIS.

According to a NOAA press release, engineers were finally able to pinpoint why the satellite, known as GOES-13, had a sudden disruption in its orientation toward Earth on May 22. NOAA said Monday that a micrometeoroid, possibly from debris left over from other space missions — otherwise known as “space junk,” — likely hit the arm for the satellite’s solar array panel, which knocked the satellite off balance.

The sudden jolt prompted the satellite to automatically shut down, as a safety precaution.

“The team of engineers — from NOAA, NASA, Boeing and Exelis — determined the collision did not damage GOES-13’s instruments, or the satellite itself,” NOAA said.

The return to service of GOES-13 means that the U.S. once again has its full complement of geostationary weather satellites in service. These satellites stay in a fixed orbit at an altitude of about 22,300 miles above the equator, allowing them to keep a constant vigil over the Earth. That is critical now that the 2013 North Atlantic Hurricane season has begun. During the period when GOES-13 was out of service, Tropical Storm Andrea formed in the Gulf of Mexico and produce widespread flooding from Florida to Maine. In fact, NOAA postponed initial plans to bring GOES-13 back into service on June 6 because of the risk that it would cause temporary data interruptions while the storm was still a threat.

This is the second time that GOES-13 has malfunctioned since September 2012. The GOES-13 satellite was launched in 2006 but not put into service until 2010. 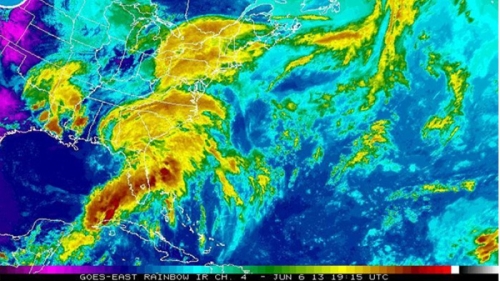 NOAA operates two GOES spacecraft — one in the East and the other in the West — at all times, along with one backup satellite in case of mechanical trouble with the operational satellites.

Although NOAA was able to cover for the temporary loss of GOES-13, it is likely to face increasingly difficult situations in the next several years as lengthy gaps in satellite coverage become more likely.

The first satellite in the next generation of GOES spacecraft won’t be launched until the fall of 2015. Across-the-board budget cuts to federal programs, known as the sequester, may cause the launch date of the first GOES-R satellite to slip, which could result in a period without any redundancy in deployed satellites, as the current satellites begin exceed their design lifetime.

NOAA ran up billions in cost overruns for the next generation of polar-orbiting weather satellites, and delays and congressional budget issues have put that program, known as the Joint Polar Satellite System, years behind schedule.