Two steps forward, one-and-a-half steps back: That’s been the story of the tenacious California drought lately.

After a torrent of rains in December made a small dent in the deep, statewide drought, the faucet has turned off, and some areas have relapsed back into ‘exceptional’ drought,  the worst drought category recognized by the U.S Drought Monitor. 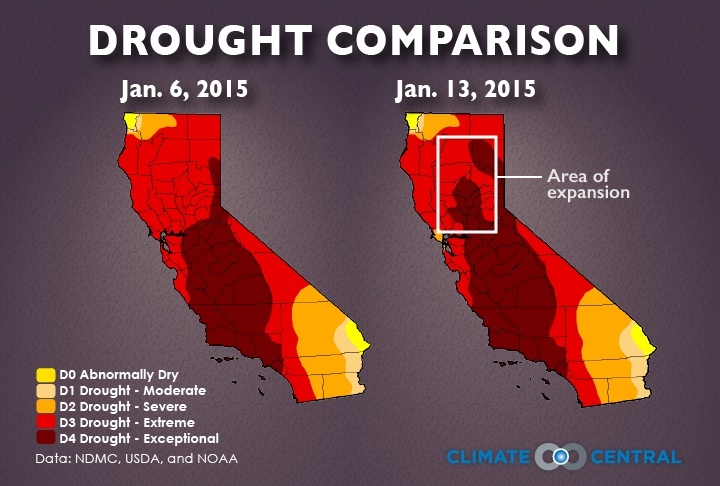 The intensification of drought conditions over parts of Northern California in January 2015.

The most recent update from the Drought Monitor, on Jan. 15, showed some continued improvement in a small area around San Francisco stemming from last month’s storms. But overall, the picture has changed little, with reservoirs still below normal, groundwater severely diminished and a woeful snowpack for this time of year, typically the state’s wet season. And warmer-than-normal weather has meant that what precipitation there has been has tended to fall as rain, not snow, and has also helped to dry out some areas that had seen recent moisture.

“The bottom line is that the drying out is disconcerting and is mitigating earlier relief,” said Richard Tinker, of the Climate Prediction Center (CPC), who was the author of last week’s Drought Monitor report. The dryness in those areas is well above normal, he said, but what the rest of the winter holds in store is still up in the air.

California gets half of its annual precipitation from December through February. If those rains and snow don’t fall, the water deficits quickly accumulate, as was seen last year when the drought rapidly expanded and deepened across the state during the winter and spring.

December provided some cause for hope that this winter would be different than last. A series of storms early in the month dumped more than 7 inches of rain in some spots, particularly around the Bay Area, and blanketed parts of the Sierra Nevada mountains with snow. That snow is a critical component of the state’s water system, feeding reservoirs as it gradually melts in the spring. Some areas saw two to three times their normal December rainfall amounts, according to the Bay Area National Weather Service office. A few places had more rain on one day, Dec. 11, than in all of 2013, the driest year in California history, the NWS said.

But since then, the rains and snows have stayed away, with barely any falling during the first half of January. And warm temperatures, which were 3.5°F above average in December, have melted some of the snow that fell earlier that month and dried out places that saw rains, particularly in the Sacramento Valley. That area was the main part of the state that regressed back into exceptional drought from extreme drought on the Drought Monitor map.

The last time it rained in #SantaCruz was exactly one month ago. #cawx

Without sustained rains and snows, average seasonal precipitation levels drop — not what you want to see for a robust drought recovery. Currently, statewide snowpack levels are at a measly 36 percent of average for this date. While that’s a step up from last year’s 15 percent by this point, it’s not nearly enough.

A look at our the very limited amount of snowfall we have across the #Sierra Region. #cawx pic.twitter.com/GhjhAoTTFl

Even if the winter of 2014-15 were a banner year for rains and snows across the state, it would still take years of above-normal precipitation to fully recover from the drought, because that drought took years to develop. The initial groundwork was laid with weak winter precipitation in 2012, followed by the record dryness of 2013, then the continued lack of rains and snows last year, which was also the hottest year on record for California. How much of the drought can be attributed to the influence of climate change is a question that has yielded a range of answers.

Californians still want, and will take, whatever they can get this winter. Storms concentrated over the Pacific Northwest this weekend sent some rain into the northwest corner of California, for example, but nothing remarkable.

“Of course every drop helps. You'd rather have one drop than none,” Tinker said in an email. However, “it's hard for one storm or two to have a significant impact unless the situation is truly exceptional, as was the case late November through mid-December in substantial parts of the state,” he added. 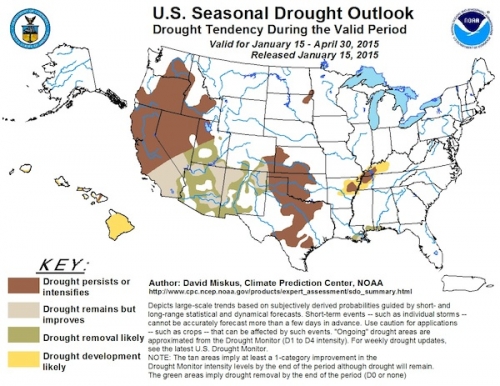 The most recent long-term outlooks from the CPC, a part of the National Oceanic and Atmospheric Administration, are not promising, at least for the northern portion of the state. Currently, forecasters have expecting above-normal temperatures over the rest of the season — not good when you need snow — and roughly equal chances of below- or above-average precipitation in Northern California. There, the drought is expected to stay in place, possibly even worsening.

Southern California could fare slightly better, with forecasters leaning slightly towards increased rainfall there, though they won’t erase the drought. But whether the state will slide back to where it was at the peak of the drought this summer is uncertain, though. Tinker thinks it would take extraordinary conditions for that to happen.

“​As for falling back to where we were at last summer or beyond ... it's too early to think that direly,” he said. “The next three months or so will make or break the forthcoming summer. It would have to be substantially drier (and probably warmer) than normal for the state to fall into a worse drought situation than last summer and autumn.”