Adapting to Sea Level Rise Could Save Trillions by 2100

Floods already pose major problems for coastal communities each year. Those issues are only likely to grow as oceans continue to rise, due in part to climate change, threatening millions of people and trillions of dollars in infrastructure. But new research suggests that building levees could stave off huge losses at a minimal cost.

Coasts are home to more than 1 billion people across the globe and up 310 million of those live in a 100-year floodplain. In addition, $11 trillion in assets also sit below the 100-year flood mark. 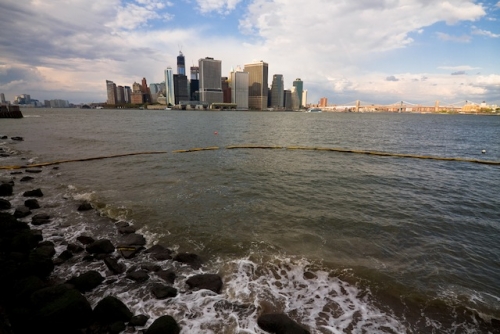 The slow creep of sea level rise is putting more and more of these people and assets at risk. Since the start of the 20th century, sea levels have risen roughly 8 inches. That number is also expected to increase into the next century as ocean waters warm and expand and more water is added from melting glaciers. A new study in the Proceedings of the National Academy of Sciences on Monday projects sea levels could rise from 9 to 48 inches by 2100. The wide range of uncertainty is due to the Antarctic and Greenland ice sheets, which appear fairly stable but if they were to start melting, could contribute as much as 25 inches to sea level rise.

The study projects that even with conservative economic and population growth, $17 trillion in coastal assets could be sitting below the 100-year flood level by 2100. In a wealthier, more populous world, that number would balloon to $210 trillion.

While these factors have been considered individually in previous studies, this is the first time sea levels, including contributions for the Greenland and Antarctic ice sheets, have been modeled in relation to both population growth and coastal development over the course of the 21st century. The results show that unless something is done, coastal flood could cause catastrophic losses every year.

“If we don’t adapt to sea level rise, the consequences will be quite dramatic through the 21st century. Up to 5-10 percent of global GDP will be damaged in 2100 on a yearly basis,” Jochen Hinkel, a senior researcher at the Global Climate Forum, said in an interview.

In the high-development, high-sea level rise scenario that translate to nearly $19 trillion in losses annually. In comparison, the entire U.S. GDP in 2012 was $15.68 trillion.

Levees offer a simple defense against flooding. The new research estimates that it would cost $12-71 billion a year to build levees high enough to keep pace with rising seas.

Though flooding would still cause damages just as it does today, Hinkel said it would be a fraction of the cost.

“It’s a very ambitious project they’ve taken on and it’s a good attempt to address something of importance,” said Bob Kopp, a Rutgers University climate scientist not affiliated with the study. “They don’t account for all of the local factors so the details of the picture are going to get a little grainy if you zoom into a global model.”

Those missing details could reduce some of the benefits of levees while also increasing the costs of flooding.

Land is sinking in coastal areas due to groundwater use and oil and gas extraction could leave certain areas such as the Gulf Coast facing greater costs for flood protection. In addition, changes in tropical cyclone activity due to climate change and other natural fluctuations were not considered.

Large storms have the potential to top barriers and cause catastrophic damage and loss of life. Hurricane Katrina caused $125 billion losses with much of that in New Orleans where levees were unable to keep back the storm surge.

Kopp said that illusion of safety could actually increase the potential for even more devastating losses in the future.

“If you build dikes, people feel safe and move into the exposed area and that increases the amount of infrastructure,” he said. “If your dikes slip up, you increase your losses even more.”

The overall cost of protecting coasts could go up or down depending on other adaptation measures as well. Though the study only examined levees, other coastal flood protections range from restoring wetlands and beaches, which in some cases are a more affordable alternative, to building more costly large barriers that can be opened and closed like those located on the Thames near London and outside Rotterdam in the Netherlands.

In New York, discussions are ongoing about the proper amount of protection needed in the wake of Sandy. Levees, wetlands, sea walls, and mechanical barriers as well as softer adaptation options like stronger coastal permitting and improved flood evacuation maps have all been considered as part of the city’s sustainability plan.

Despite these obstacles, Hinkel said protecting coasts should not be viewed as a challenge.

“The research shows that there is an opportunity in acting,” he said. “We have looked at the fuller picture, but there’s a lot of work that needs to be done to look at local decisions that need to be taken.”

Kopp agreed, saying that the geographical, social, and economic details in each community will ultimately inform the actions needed to be taken to protect against rising seas.