Parts of Iceland are rising, and the culprit may be climate change.

GPS measurements show that land in the central and southern parts of Iceland have been rising at a faster pace every year, beginning at about the same time as the onset of the ever-increasing melt of the island’s eponymous ice due to rising temperatures, a new study finds. 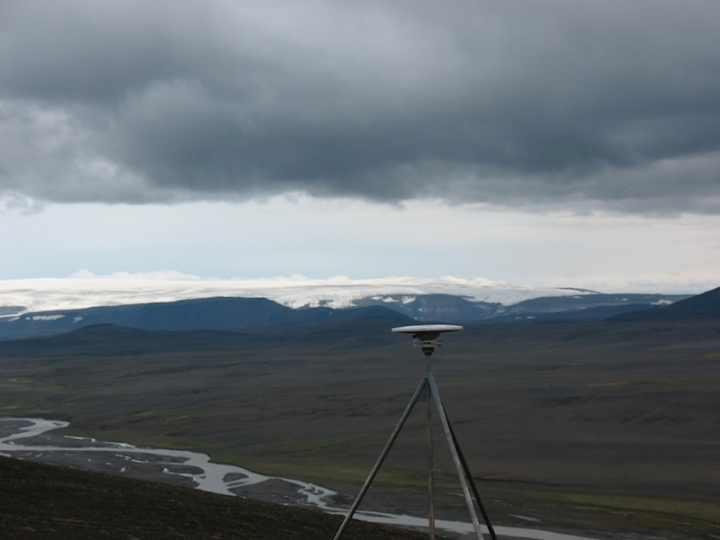 One of 62 GPS stations scattered around Iceland that have detected the land rising in response to glacier melt. Langjökull glacier is in the background.
Click image to enlarge. Credit: Richard A. Bennett/ University of Arizona Department of Geosciences

“There have been a lot of studies that have shown that the uplift in Iceland is primarily due to ice loss,” study lead author Kathleen Compton, a PhD student at the University of Arizona, said. But this one, detailed in the journal Geophysical Research Letters, is the first to show that the acceleration of one speeds up the other.

That uplift could in turn affect Iceland’s notorious volcanoes and hasten eruptions, which can have impacts on air travel, so clearly seen in the 2010 eruption of Eyjafjallajökull, which disrupted air traffic for weeks.

Any big chunk of ice like a glacier or an ice sheet pushes down on the land below it, like a person laying on a tempurpedic mattress. (This is why parts of the bedrock of Antarctica are actually below sea level.) When that ice is removed, the land slowly rebounds, just as the mattress will slowly fill in when the person gets up.

Parts of North America are still rebounding after the retreat of the ice sheets that covered the region during the last major ice age thousands of years ago. But under Iceland, the mantle — the semi-solid layer of the Earth below the crust ­— is a bit goopier, and so responds more quickly to changes in the weight pressing down on it.

What the new study shows is that parts of Iceland are rising much faster — as much as 30 millimeters, or 1.4 inches, a year — compared to prehistoric ice loss. This faster response is because recent ice loss, which is ultimately triggered by atmospheric warming due to the buildup of greenhouse gases, is happening at a faster pace.

“I'm not surprised at the amount of uplift, as the visible signs of ice loss are there for everyone to see,” David McGarvie, a volcanologist with The Open University in Scotland, who has studied Iceland, said.

And not only is the uplift faster, it’s accelerating 1 to 2 millimeters per year, Compton and her colleagues found.

The researchers first noticed this unexpected increase in the uplift when they looked at the data coming from one of the GPS stations in a network of 62 such stations across the island. In looking at other stations in that network, they found the same trend, with the fastest accelerating uplifts closest to the biggest glaciers. 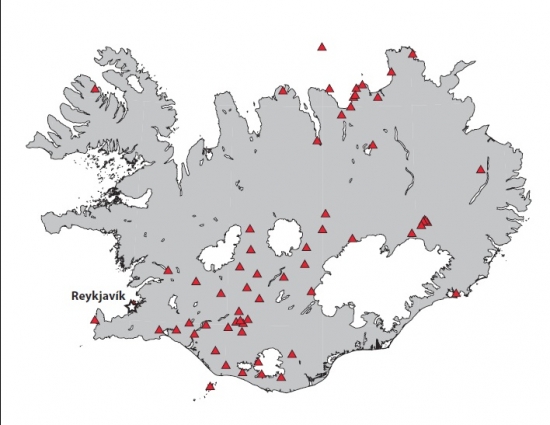 The red triangles on this map of Iceland mark the locations of GPS stations that have detected rising land in response to melting glaciers (in white).
Click image to enlarge. Credit: Kathleen Compton/University of Arizona Department of Geosciences

In analyzing the records, the team found that the area with the accelerated uplift coincided with the higher rates of glacier melt that has been separately documented by glaciologists since 1995.

“The upward velocity of the crust as measured by the researchers is almost certainly due to recent loss of ice mass due to melting,” McGarvie said.

As further corroboration, temperature records going back to the 1800s have showed steadily rising air temperatures since 1980. Both of these factors correspond to calculations Compton performed when Iceland’s recent uplift began.

“It’s always nice to see something come together this well,” she said.

Compton also ran some calculations that showed that the only way to see the faster and faster uplift would be from sped up ice melt.

McGarvie isn’t completely convinced that the uplift is escalating as the data record is relatively short (only a few decades), but he says the idea is well worth continued study.

Whether or not similar uplift could be happening in other places with significant ice loss is difficult to assess because many of those spots have land that responds more slowly to pressure changes and have less extensive GPS stations than Iceland.

But, Compton said, “I think it’s certainly something that we should have on our radars.”

As for how the uplift will continue to play out in Iceland, she said that “this acceleration can’t go on forever,” but that it would be interesting to monitor over the next several years and see how it might change over time.

One thing scientists are concerned about are the potential effects the uplift could have on tectonic activity in an already active Iceland, as the changing stresses on the ground could impact volcanoes and earthquake faults. In fact, another recent study suggested that melting in the mantle caused by uplift could make eruptions of the size of Eyjafjallajökull in 2010 more common — an effect of climate change that wouldn’t be limited to Iceland itself, as that episode made clear.