A study of abandoned oil and gas wells in Pennsylvania finds that the hundreds of thousands of such wells in the state may be leaking methane, suggesting that abandoned wells across the country could be a bigger source of climate changing greenhouse gases than previously thought.

The study by Mary Kang, a Princeton University scientist, looked at 19 wells and found that these oft-forgotten wells are leaking various amounts of methane. There are hundreds of thousands of such oil and gas wells, long abandoned and plugged, in Pennsylvania alone, and countless more in oil and gas fields across the country. These wells go mostly unmonitored, and rarely, if ever, checked for such leaks. 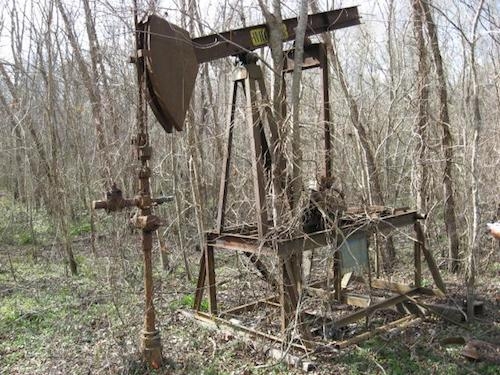 A growing list of studies conducted over the past three years has suggested that crude oil and natural gas development, particularly in shale formations, are significant sources of methane leaks — emissions not fully included in U.S. Environmental Protection Agency greenhouse gas inventories because they are rarely monitored. Scientists say there is inadequate data available for them to know where all the leaks are and how much methane is leaking.

Methane is about 34 times as potent as a climate change-fueling greenhouse gas than carbon dioxide over a span of 100 years. Over 20 years, it’s 86 times more potent. Of all the greenhouse gases emitted by humans worldwide, methane contributes more than 40 percent of all radiative forcing, a measure of trapped heat in the atmosphere and a measuring stick of a changing climate.

So when abandoned oil and gas wells — possibly hundreds of thousands of them in Pennsylvania alone — that are not currently included in any federal estimate for total U.S. greenhouse gas emissions are found to be leaking methane, the implications could be significant.

Kang directly measured leaks from the abandoned wells and found that all 19 wells in the study tested positive for methane leaks, some more than others.

She found that overall, the wells leak so much methane that if leaks from all the abandoned wells in Pennsylvania are added up, the leaks could account for between 4 percent and 13 percent of human-caused methane emissions in the state.

But because of significant uncertainty about the total number of abandoned and plugged wells that exist in Pennsylvania, more study is needed to fully understand how common leaking abandoned wells are in the state and how much methane they may emit.

Nobody knows exactly how many abandoned oil and gas wells exist in Pennsylvania, but the study says that historical records show there are between 280,000 and 970,000 abandoned oil and gas wells. Pennsylvania is the site of one of America’s earliest discoveries of crude oil, at Oil Creek in 1859, and the state is considered the birthplace of the petroleum industry in the U.S.

Kang’s study found that state regulations do not appear to be effective at controlling methane emissions from abandoned wells because the rules focus on containing fluids, not gases, and the plugged wells are not required to be monitored closely over time.

More study is needed of similar abandoned and plugged oil and gas wells in other states for scientists to be able to estimate methane emissions from similar wells elsewhere, Kang’s study says.

Kang declined to comment because the study is currently under review by a scientific journal and may be published later this summer.

“Measuring methane losses from abandoned oil and gas wells is important,” Robert Jackson, a professor of global environmental change at Duke University, said. Jackson’s own research has shown methane leaks are a hazard in natural gas distribution systems in the U.S. “The emissions from single wells were relatively small, but there are hundreds of thousands of such wells in Pennsylvania alone. The total emissions could be as much as one eighth of all methane released by human activities in the state.”

He said the next step in this research is to obtain a larger sample size of oil and gas wells across a broader area.

“That way we'll obtain a better handle on losses across the state and country,” Jackson said.

Kang’s is one of the few studies to clearly demonstrate and quantify methane leaks from abandoned and plugged wells, said Cornell University biogeochemistry professor Robert Howarth, who is known for his research into methane emissions from natural gas operations. 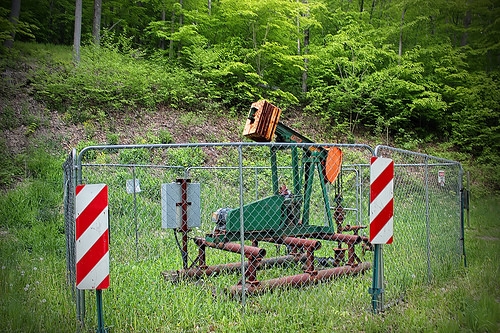 An oil well in Pennsylvania.
Credit: Nicholas A. Tonelli/flickr

A “bottom-up” approach is often flawed because it leaves out certain sources of greenhouse gases that may leak from unexpected places, Howarth said.

“This new study shows one of these left-out sources: the plugged and abandoned wells,” he said.

Kang’s study “supports what I and many others have been saying for many years, and that’s this: There is methane leaking from oil and gas wells. Period,” said Cornell University environmental engineering professor Anthony Ingraffea, who has collaborated with Howarth on methane emissions research and is currently analyzing Kang’s work.

The study is further evidence that there is too little data available for scientists to fully understand how much methane is leaking from oil and gas fields in the U.S., both from producing wells and abandoned wells in addition to natural gas distribution systems, he said.

Terry Engelder, a geosciences professor at Pennsylvania State University known for his controversial calculations of shale gas reserves existing in Pennsylvania's Marcellus shale formation, said that while methane is clearly leaking from abandoned wells, it's unlikely that all of the state's abandoned and plugged wells are leaking.

Leakage may depend on the specific geologic formation a well taps because wells in some formations would release much gas early in the drilling process and much less, if any, later on, he said.

“(The) flaw in the Kang study is that she tells the reader nothing about the wells she is sampling,” such as the well depth and the formation into which the well was drilled to produce oil or gas, Engelder said.

The idea that abandoned wells leak methane isn’t a new idea, but Kang’s work provides some new data for scientists to work with, said Lawrence Cathles, a Cornell earth and atmospheric sciences professor who is known for his criticism of Howarth and Ingraffea’s work.

“I don’t think presently leaking wells will change our perspective on greenhouse warming because their leakage has already been accommodated by the climate system and methane is only 20 to 30 percent the total greenhouse forcing at present,” Cathles said via email. “What matters is how methane leakage changes in the future. If the well leakage is significant, reducing it in historic wells might reduce greenhouse forcing somewhat (and thus present a remedial opportunity).”

He said it might be beneficial to minimize future methane leakage from abandoned oil and gas wells if Kang’s research holds up to scientific scrutiny.