Early this week, when Colorado State Climatologist Nolan Doesken toured an area of southeast Colorado hit hardest by the drought of 2012, he was greeted with a vast expanse of parched farmland that had turned into a moonscape with almost no vegetation.

That area along the Arkansas River hadn’t seen much rainfall in nearly three years, a long dry spell broken recently by a series of torrential downpours, leaving the moonscape even more surreal.

“Some of that moonscape was standing water from recent rain,” Doesken said. “There was enough moisture that in many places the weeds have started to grow.”

The rain was part of a welcome series of deluges that washed over much of the drought-stricken Great Plains this summer, drawing a stark contrast between drought conditions today across the U.S. and the devastating drought of 2012.

A year ago, drought conditions stretched from coast to coast — Massachusetts to California — hitting central Georgia and the central Great Plains states of Kansas, Nebraska, Colorado, Oklahoma and Texas the hardest. Drought conditions in the Great Plains were worse than the driest summers of the Dust Bowl of the 1930s. By the end of July 2012, drought-related losses there were already estimated at $14 billion.

Today, the Great Plains are still suffering even with recent rains, and the drought has situated itself roughly along the nation’s traditional boundary between wet and dry — the 100th Meridian. East of that line, annual precipitation is generally above 25 inches; west of it, an arid climate reigns in most areas.

Climate change may be partly responsible for how the drought is easing in some areas to the East, even as it's likely to cause drought events to become frequent and severe.

Abnormally heavy summer rains have forced a partial retreat of exceptional drought, the term for the most devastating dry conditions, in Colorado, Kansas and other parts of the Great Plains, and a complete disappearance of all drought conditions in hard-hit Georgia, according to the August 13 edition of the Drought Monitor, published Thursday.

The intensity of the rainfall causing the drought to ease in some parts of the country fits with many climate change models, said Richard Heim, meteorologist for the National Climatic Data Center in Asheville, N.C.

As temperatures warm, the air holds more moisture and retains it longer than in cooler conditions. That means heavy rain becomes more common and dry spells between heavy downpours become lengthier, he said. 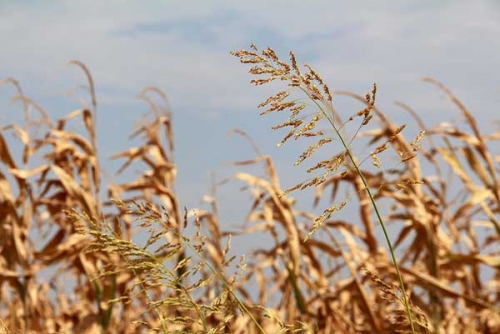 “That is, we can see more intense short-term droughts interspersed with these really heavy downpours, where we can get a month or two of rainfall in a couple of days, which is what we’ve been seeing,” Heim said.

The heavy rains have eased the drought nationwide to the point where the area of the contiguous U.S. affected by drought has dropped significantly since the end of last summer.

“Last year, at the beginning of August, we had 62.46 percent of the contiguous 48 states in drought, and we’re comparing it to 45.49 percent this year. That’s a big number,” said Brian Fuchs, climatologist at the National Drought Mitigation Center at the University of Nebraska-Lincoln.

As of Thursday, the area of the country under moderate-to-exceptional drought conditions had fallen to 45.26 percent.

Today, 2.03 percent of the country is suffering from the worst drought conditions, mainly in northwestern Kansas and the New Mexico’s central Rio Grande Valley, with some areas in northeast Arizona, western Nevada and eastern Colorado’s Arkansas River Valley.

But Colorado is an example of what is extraordinary about how the weather this summer has affected the drought in parts of the West. Colorado, which suffered badly from the 2012 drought, received less rain — 2.47 inches — this July than the 2.84 inches it received during the drought in July 2012, but cooler, more humid conditions this year have meant that the rainfall the state received this summer allowed the moisture to soak into the soil and more effectively prevented evaporation than the monsoon rains the state received during the high heat of 2012.

But as the drought continues with less intensity in the Great Plains, dry conditions are expanding along the West Coast, where Oregon saw its driest July on record this summer and extreme drought conditions are hitting parts of Southern California.

The period from January through June this year in California is the state’s driest such period on record, according to the current Drought Monitor.

Drought is expected to persist throughout much of the West and Texas with some improvements in New Mexico, central Colorado and parts of northeast Texas and the Great Plains through the end of November, according to the U.S. Seasonal Drought Outlook released Thursday by the Climate Prediction Center at the National Oceanic and Atmospheric Administration.

Whether improvements in drought conditions across the country will be brought by more abnormally heavy rainfall will depend on how much moisture the atmosphere in a changing climate can hold and for how long, and clues may come from precipitation records from the past century.

In a globally warmed world, scientists are seeing a clear shift to more hot and humid weather, Heim said.