A Green Alternative That Might Just Save the Planet

“It's best to get it out of the water now or it'll start getting grazed by the little beasties,” says Lars Brunner as he hauls 50 kg (110 pounds) of glistening, translucent kelp from the dark waters of the Sound of Kerrera into the boat. The long summer days mean the seaweed is rapidly storing up sugars, which snails and barnacles find delicious.

“You can eat it, but whether it tastes good is debatable,” says Brunner. He is also after the sugars, but for a different reason. His work at the Scottish Association for Marine Science (Sams), with parallel projects in Ireland and Norway, is part of a growing worldwide effort aiming to turn the centuries-old seaweed industry into a major source of environmentally friendly biofuels. 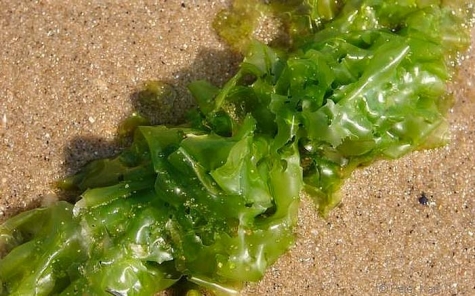 Many millions are being invested in seaweed research from Vietnam to Israel to Chile because producing biofuels in the sea removes at a stroke many of the serious problems with conventional biofuels.
Credit: flickr

The seaweed is farmed in a picture-perfect sea fjord that once hosted a fish farm, near Oban in Argyll, where craggy, green hills overlook the loch. “It's a very good site,” says Brunner. “It has really nice currents; the seaweed needs the water to flow over the blades so they can capture the nutrients they need.”

Many millions of pounds are being invested in seaweed research from Vietnam to Israel to Chile because producing biofuels in the sea removes at a stroke many of the serious problems with conventional biofuels. Though important as greener alternatives to oil, many biofuels are produced from food crops, such as corn and sugar, which drives up global prices in a world where a billion people are already hungry. Biofuel production also consumes increasingly scarce freshwater and the worst examples — those from palm oil — can produce more carbon dioxide than diesel.

“Seaweed does not have any of those problems,” says Phil Kerrison, another marine scientist, back at the Sams labs. Seaweed farming has even been shown to clean up the pollution from fish farms and kelp grows far more quickly than land plants, turning sunlight into chemical energy five times more efficiently. 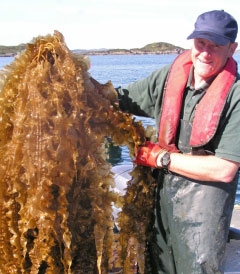 Kerrison pulls a square of plush red carpet from a tank, strewn with the tan-colored kelp. “Carpet is very good as a growth substrate,” he says. “It has a rough surface, but then it also holds a lot of water making it very heavy and putting strain on the moorings.” His task is to find the best material to farm the seaweed on, but he is cautious of revealing too much as there are significant commercial interests at stake.

“It could definitely be a large scale energy source,” he says. “Modern cars can already take 10 percent ethanol, so you already have a way of using it and you are already filling up cars with biodiesel from land crops, so why not seaweed?” Many see huge potential, with the UK government already including up to 4,700 sq km (1,814 sq miles) of seaweed farming cultivation in its future energy scenarios and another study finding it could in theory supply the world's needs several times over. Seaweed can be used to produce ethanol, which can be mixed with petrol, or methane, the main component of the natural gas heating the UK's homes.

But despite 1,000 years of seaweed cultivation, largely in Asia, it remains a labor-intensive industry. Twine has to be impregnated with millimetrer-sized seaweed embryos then wound around ropes. After a growing season in the water, it is harvested by hand. Oban has a history of seaweed industry: there used to be a large factory a few miles up the coast at Barcaldine that ran 24 hours a day and bussed in workers from all around. It produced alginate, a common thickener in ice cream and other food, until cheap imports killed the business.

“This new interest is like the wheel coming around again,” says John Keeney, skipper of the Sams boat and a former fish farmer and harbourmaster. Roderick McEachen, who runs the local ferry, agrees. Pointing over the water to the white farmhouse he was born in, he says: “They used to use seaweed to grow potatoes; it was ideal.” 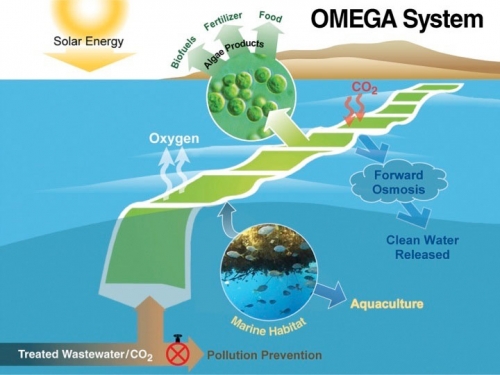 NASA's Offshore Membrane Enclosures for Growing Algae is an innovative method to grow algae without competing with agriculture for water, fertilizer or land.
Click image to enlarge. Credit: NASA

Seaweed is also used to produce vitamin supplements — the huge Chinese industry was founded to provide iodine to the country's swelling population — as well as cosmetics, plastics and animal feed. These multiple uses could help solve seaweed's biggest barrier to a biofuels breakthrough, says Kerrison. “The main challenge is making the costs low enough, although they are continuously going down because research is going on all over the world. But if you can extract an expensive product first, then do the biofuel, you get a double whammy that helps the economics.” Other advances being worked on include mechanizing seaweed production and using the base of offshore wind turbines as growing sites.

There are other potential barriers, including the fact that most common microbes do not ferment the special sugars in seaweed very well. But in 2012, a Californian firm produced genetically modified bacterium that can produce about 1kg (2.2 pounds) of ethanol from 3kg (6.6 pounds) of dried seaweed. Other research in the area involves harvesting bacteria from the droppings of the sheep on the Scottish island of North Ronaldsay, which thrive on an almost exclusive diet of seaweed.

The environmental impact of large-scale seaweed farming is also being investigated but appears as likely to be positive as negative. Some phytoplankton may be outcompeted for nutrients, but the swathes of kelp may provide hatcheries for fish and compounds seaweed gives off in summer could sink and trap climate-warming carbon on the seabed.

Professor Mike Cowling, chief scientist at the Crown Estate, which controls leases of the UK seafloor, is cautiously optimistic. “It is on the threshold of taking off,” he says. Seaweed farms covering 15,000 sq km (5,791 sq miles) of UK water could be in operation by 2050. But he says the seasonality of the growing season is a challenge.

Professor Laurence Mee, director of Sams, believes large-scale seaweed farming will become a reality because global competition for resources is intensifying on an increasingly crowded planet. “We have the highest commodity prices in history and we are running out of places to grow things.”

The global seaweed farming industry already produces tens of millions of tonnes every year across 44 countries and is worth billions of dollars. But the prospect of a truly sustainable biofuel that can replace climate-warming fossil fuels without making world hunger worse is driving new investment across the globe.

Europe is spending millions of euros on nine pilot plants along its Atlantic coast, while the U.S. department of energy, Norwegian oil giant Statoil and the Chilean government have invested in seaweed-biofuel projects.

In Vietnam, shrimp farmers are now growing seaweed resulting in higher incomes, cleaner water and a locally produced biofuel. In Israel, researchers are testing integrated systems where fish, oysters and seaweed are grown together to maximize the use of nutrients, an echo of the Chinese practice of growing tilapia fish in rice paddies. In India, red seaweed is being investigated.

Seaweeds are macroalgae but their tiny, unicellular cousins — micro algae — are also seen as promising potential source of biofuel. The U.S. navy is spending heavily on the technology while ExxonMobil has sunk $600 million into its research.

With microalgae, each cell floats free and so needs to be contained in growth ponds or tubes. In China, carbon dioxide from a coal power plant has been used to feed tubes of microalgae while NASA is investigating growing algae in floating plastic bags.

In Spain, sewage is being used to feed algae and produce fuel while cleaning up waste water.

Algae enthusiasts should, however, be aware of previous false dawns in turning seaweed into fuel. In 1979, the Guardian reported that within 10 years supertankers could be farming the abundant seaweed in the Sargasso sea to fire power stations.