The final numbers are in: 2014 is officially the hottest year on record in the past 135 years, NASA and the National Oceanic and Atmospheric Administration (NOAA) announced Friday.

The record does not come as a surprise as it’s another marker of the sustained accumulation of heat in the atmosphere thanks to the unabated emissions of greenhouses gases such as carbon dioxide. Nine of the 10 warmest years on record have all occurred in the 21st century, with the exception of the blockbuster El Nino year of 1998. It also marks 38 straight years of above-average global annual temperatures.

A Climate Central analysis shows that 13 of the hottest 15 years on record have all occurred since 2000 and that the odds of that happening randomly without the boost of global warming is 1 in 27 million.

According to NOAA, the average global temperature for 2014 was 1.24°F above the 20th century average of 57°F. The year, capped off by a record warm December, surpassed the previous record holders, 2005 and 2010, by 0.07°F.  Those numbers confirm the ranking by the Japan Meteorological Agency (JMA) made earlier this month.

Including December, there were seven months in 2014 that set or tied record warmth.

There are small differences in the way various agencies handle global temperature data, yielding sometimes different rankings for particular months and years. But for 2014, there is broad agreement on the ranking, and for all agencies, nine of the 10 warmest years on record have all occurred since 2000.

The lack of any record cold years since 1911 is another sign of the long-term global warming trend. Over that same period, 19 records for hottest year, including 2014, have been set, according to a Climate Central analysis.

Unusual warmth was spread across certain land regions this year, particularly the Russian Far East, the U.S. West, parts of Australia, and Europe, which saw its hottest year in more than 500 years.

But it was the warmth of the oceans that really stood out. Sea surface temperatures for the planet were a record 1.03°F above the 20th century average, surpassing 2003 and 1998 (when an extreme El Nino boosted ocean heat) by 0.09°F. 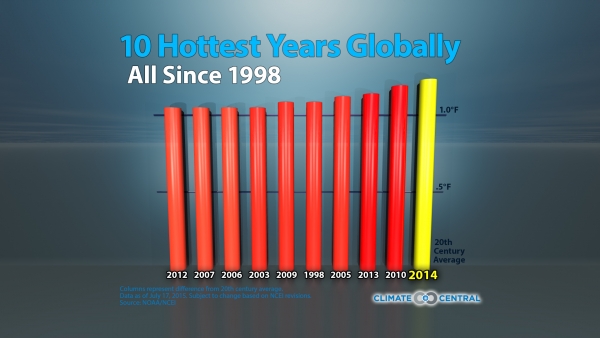 Every ocean basin had some part of it with record warmth, said Thomas Karl, director of NOAA’s National Climatic Data Center.

How 2015 will shape up is, of course, uncertain, but that ocean heat will play a role, as water responds much more slowly to changes in heat than land. So even if there is an event like a volcano eruption that could cause cooling, that ocean heat isn’t likely to dissipate anytime soon.