Editor's Note: The satellite failed to launch Tuesday morning as scheduled due to a technical glitch on the launch pad, according to NASA. If the problem can be fixed, the new launch time has been slated for Wednesday at 5:56 a.m. EDT. The weather forecast is currently 100 percent favorable for that time. 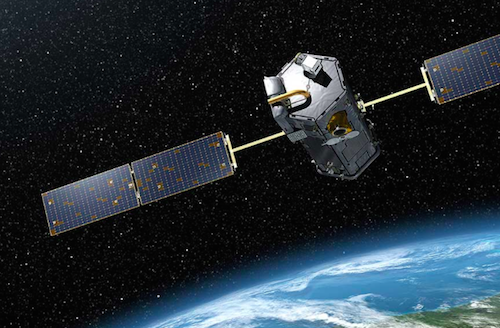 But exactly which systems are net sources of carbon and which are net sinks (which remove carbon from the atmosphere), as well as how their activity changes over time has been something of a mystery, one that scientists hope a new satellite mission launching Tuesday will help solve. Dubbed the Orbiting Carbon Observatory-2 (after the original OCO satellite), the satellite will measure the carbon dioxide in Earth’s atmosphere, from the ground to where the satellite orbits. The hope is that this will help sketch out how carbon is moved around between the atmosphere, the biosphere, and the oceans, and where the exchanges occur.

“The principal goal is to determine where CO2 sources and sinks are in space and time,” said mission scientist Kenneth Davis of Penn State.

The OCO-2 satellite is slated to launch at 5:56 a.m. EDT on Tuesday from Vandenberg Air Force Base in California and you can watch the launch live on NASA TV. The original OCO crashed into the Indian Ocean in 2009 after a malfunction prevented the satellite from properly separating from the rocket and reaching orbit. But NASA is trying again, duplicating as much of the original satellite's features as possible in order to keep costs in line and the mission on schedule.

“This was certainly a reaction to the loss of the first one,” Davis told Climate Central.

The $468 million mission is slated to last for 2 years, though if it performs well and can still be used, that mission could be extended.

Such knowledge could help scientists better understand how the carbon cycle might be altered in the future, as further effects of climate change emerge. It could also help provide a way to monitor emissions in the event of any national, regional or global agreements on reducing such emissions, though that isn’t the intended purpose of the satellite, Davis said. Prominent scientists such as James Hansen have advocated for significantly reducing greenhouse gas emissions to keep Earth's warming to manageable levels.

Right now, measurements of CO2 in the atmosphere are made from sites on the ground, on towers and in aircraft. Perhaps the most famous such site is the observatory atop Hawaii’s Mauna Loa, where the first measurement of a CO2 concentration greater than 400 parts per million was made. This year, Mauna Loa measurements showed that concentrations have remained above that level for more than three months, since late March. 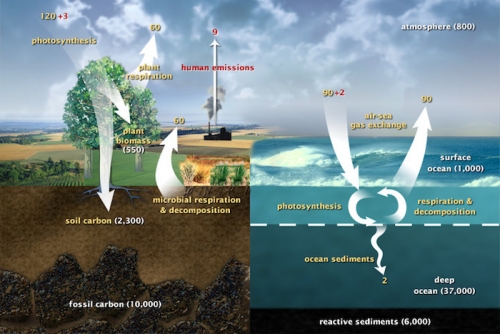 This diagram of the carbon cycle shows how carbon moves between the oceans, the atmosphere and the terrestrial biosphere. Yellow numbers show natural fluxes of carbon, while red numbers show human contributions (both in gigatons of carbon per year). White numbers are the amounts of carbon stored in various reservoirs.
Click image to enlarge. Credit: NASA's Earth Observatory, adapted from U.S. DOE, Biological and Environmental Research Information System.

While the surface measurements of CO2 are precise, they aren’t available over large parts of the globe. There is fairly good coverage over North America and Europe, Davis said, but few quality measurements are available from over the oceans, especially the remote Southern Ocean, and the tropics, as well as other developing parts of the world.

OCO-2 will be able to peer down through the atmosphere from its perch 438 miles above the planet. It will measure the amount of near-infrared radiation that bounces back from the surface to “see” how much carbon dioxide is in a vertical column of the Earth’s atmosphere at a higher resolution than a Japanese satellite currently in orbit, the only other satellite specifically devoted to measuring CO2. (The ground-based measurements will still be needed to calibrate what the satellite is seeing, said climate scientist Pieter Tans, who is not part of the OCO-2 team, but whose group at the National Oceanic and Atmosphere Administration has several participating scientists.)

During its 2-year mission, OCO-2 will make about 1 million measurements on the sunlit part of the Earth each day.

Of course, the technology isn’t as simple as pointing the satellite at the planet and getting back a CO2 reading. Extracting the CO2 measurements from the satellite data at the needed precision will be a complex, difficult task, Davis told Climate Central, and is the focus of one whole group on the science team.

One problem is that clouds and aerosols (tiny solid or liquid particles suspended in the atmosphere) can interfere with the measurements, because they impact how much infrared radiation is reflected. That will make measurements in notoriously cloudy parts of the planet, such as the tropics and boreal areas, more difficult. But the hope is that the high resolution of the instrument will be able to peer through gaps in clouds more readily than its Japanese counterpart.