The 7 Most Interesting Climate Findings of the Year

At Climate Central, we love climate research (but really, who doesn’t?). We cover it relentlessly and a lot of findings have come through our inboxes this year. All those studies are crucial to shaping both what we know about the world we currently live in as well as what we’re in store for in the future depending on how we respond to climate change.

But there are a baker’s half dozen studies that really piqued our interest this year, from the Atlantic circulation slowdown to the disappearance of the global warming slowdown. While the seven were all fascinating and critical, some also created controversies that are still ongoing.

The finding: We could be entering an era of warming unseen in at least 1,000 years.
Why it made the list: The rate of global warming has increased with each passing decade. A couple of studies published this year show that the rate will not only continue to rise, but soon be one the earth hasn’t seen since the Vikings found their way to Greenland (and possibly longer than that). Warming will be fastest in the northern hemisphere, which just so happens to be where most humans live.

The finding: The Southwest and Central Plains face an “unprecedented” megadrought.
Why it made the list: The Southwest and Central Plains are already pretty dry places. Now imagine a drought that “makes the Dust Bowl look like a picnic.” That’s what the region has in store in the coming decades, according to climate projections published earlier this year. Since the 1930s Dust Bowl, population and agriculture have both boomed in the region. That means more people and more assets could face a drought worse than anything the region has seen in a long time.

The finding: Atlantic circulation is weakening, which could be bad news for weather and sea levels.
Why it made the list: Climate change is causing Greenland’s ice to melt, sending a rush of cold freshwater into the sea. That’s acting as roadblock on a key ocean conveyor belt that shuffles warm water from the tropics northward. The slowdown in circulation has been tied to a 5-inch spike in sea levels on the East Coast and harsh winters in Europe. Movie aficionados might also remember a similar scenario occurring in “The Day After Tomorrow” and spinning up a series of super storms that freeze out the East Coast. That outcome is a little far-fetched but the impacts of an Atlantic shutdown are still nothing to scoff at. 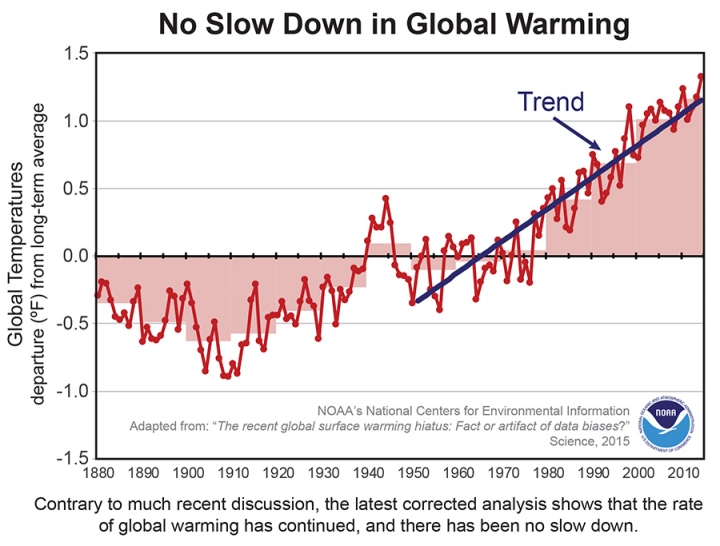 The finding: The global warming hiatus might just be a data artifact.
Why it made the list: Hoo boy, did this study generate some controversy. A theoretical slowdown in global warming has been studied — and debated — extensively and a number of studies have linked it to different ocean basins taking up more heat from the surface and stashing it down with Aquaman’s lair.

But a study by National Oceanic and Atmospheric Administration researchers said the slowdown might just be a data artifact based on how scientists account for temperature measurements taken by ships. The revised dataset has come under fire from highly partisan Congressional investigations but we’ll let Gavin Schmidt, NASA’s chief climate scientist who maintains one of the other major global temperature datasets, have the last word: “The fact that such small changes to the analysis make the difference between a hiatus or not merely underlines how fragile a concept it was in the first place.”

The finding: A climate change-induced drought helped spur the Syrian conflict.
Why it made the list: The climate-conflict got a topical jolt earlier this year when a study tied climate change to the Syrian drought that, in part, precipitated Syria’s civil war and the rise of ISIS. The connection between climate-driven conflict is the source of, well, conflict, in the research world. This study makes the case that climate change-caused drought acted as a threat multiplier, though it’s clearly but one of many threats that brought about the current quagmire in the Middle East.

The finding: Ice sheets in Antarctica could rapidly melt, causing seas to rise up to four times faster than current projections.
Why it made the list: Most high end sea level rise projections indicate if we continue on our current greenhouse gas emissions path, oceans will rise a little more than 3 feet by 2100. But research published earlier this year by James Hansen, NASA’s former chief climate scientist, shows that number could be far too low. Instead, oceans could rise by as much as 16 feet due to the rapid melt of Antarctica.

While the odds of ice sheet collapse, especially in West Antarctica, are increasing, the timeline is still very much under scrutiny, which made these findings highly controversial. They also attracted debate for highlighting results that hadn’t yet been through the peer review process. That’s because the journal they were published in does public peer review, putting the results through the independent scientific ringer for all to see. In the months since, it’s received dozens of comments (see them all here) and is still under review by the journal.

The finding: California’s drought has turned its forests from climate guardians into climate polluters.
Why it made the list: The Golden State’s seemingly endless drought has been the subject of much research, including the role climate change has played (the verdict: yes in terms of heat, maybe in terms of precipitation). An important but perhaps under-the-radar drought impact has been the transition of California’s forests.

Major forest fires raged across the state this year, releasing decades of stored carbon dioxide into the atmosphere. That effectively turned California’s forests into climate polluters as they released more carbon dioxide than they took up. Warmer temperatures in the future likely mean more years where not just California’s forests, but forests across the West and the world release more carbon than they take up, increasing the dire consequences of climate change.