7 Images That Tell the Story of the Arctic Outbreak

It started with a typhoon in the Western Pacific and will end with unseasonably cold temperatures across a vast swath of the country east of the Rocky Mountains.

The invasion of frigid Arctic air began on Monday, when temperatures began plummeting, first across the Northern Plains, and then bleeding southward as the Arctic air plowed over the landscape.

The event led to some pretty wild temperature swings — Denver saw the mercury drop more than 40°F in a matter of hours — and to some stark weather maps and photos. Here, we’ve rounded up some of the most arresting images of this unusual weather pattern.

Let’s start with that typhoon that helped get this early Arctic outbreak going: Typhoon Nuri spun up last week in the Western Pacific, reaching Category 5 hurricane status at its peak before weakening as it moved over colder waters. As it continued northward over the ocean, skirting Japan, it transitioned into an extratropical cyclone, deepening once again over the Bering Sea in a process called bombogenesis (one of the more evocative meteorological terms). The impressively strong storm can be seen in the below satellite image:

At 924 mb, the Bering Sea storm is the strongest on record in the N. Pacific. http://t.co/VDbAKu0q6e #BeringBomb pic.twitter.com/c5ajw6rZ0T

Nuri’s strength, along with some other atmospheric factors, helped set off a domino effect in the jet stream, with a high pressure ridge setting up shop over western Canada, letting loose a surge of Arctic air that plunged southward.

This setup, while not unheard of at this time of year, is unusual, said Brian Hurley, a meteorologist with the National Oceanic and Atmospheric Administration’s Weather Prediction Center in College Park, Md.

“This kind of outbreak is about a month early,” he told Climate Central.

For example, in the part of the U.S. where the frigid onslaught began — the high Northern Plains, particularly in Wyoming and Montana — temperatures were a whopping 35°F below normal. That’s cold even by Montana’s standards.

If this outbreak had happened a month later, when the normal high temperatures will have plummeted, the difference wouldn’t be nearly as stark, Hurley said.

After crossing into the U.S., the bone-chilling air started “eventually sort of oozing its way southward and eastward,” with the southward component the “heart” of the coldest air, Hurley said.

As it bled over Colorado, the cold front provided quite a shock to residents, causing temperatures in Denver to drop a mind-boggling 44°F in just 6 hours (and more than 30°F of that drop came in less than hour in some spots). In Boulder, home to the National Center for Atmospheric Research, temperatures tanked by about 20°F in an hour.

“It was quite a shock indeed!  We're used to large temperature swings here, but even by Colorado standards this was a remarkably sharp cold front,” Bob Henson, an NCAR science writer, said. “Then the front itself was unmistakable as it approached — a wall of cloud with patches of virga sweeping in from the northwest.” (Virga is precipitation that doesn’t reach the ground.)

Adding to the weather whiplash were the signs of autumn that still lingered, even as the weather turned decidedly wintery: “We still have a few trees with bright color, which only added to the shock of going from a sunny, mild autumn morning to a winter-like afternoon,” Henson said in an email.

University of Colorado Boulder student Christopher Nie perfectly captured the seasonal change that happened in just a matter of hours in a set of photos:

And in less than 4 hours, winter is here in @bouldercolorado. Taken from the EC at @CUBoulder pic.twitter.com/42li2U5pjF

Some of the best illustrations of the abruptness of the change came from regional and national temperature maps. This tweet from the Weather Channel shows the sharp change over a short distance as the cold front swept through Iowa, with a nice symmetry between the 27°F temperature on one side and the 72°F on the other:

National maps from Monday and Tuesday gave a broader view of the “oozing” of the temperatures, as Hurley called it:

Sharp fronts are my favorite. Unbelievable to have polar air just miles from a summer feel. Gradient of 60º/160 miles pic.twitter.com/97SMW5nQiW

The Arctic air is oozing south toward the Gulf of Mexico, now bisecting state of Texas. pic.twitter.com/w4qZldOaBr

Part of the reason for the stark contrasts in temperatures in these maps is again the unusually early timing of the Arctic outbreak. The differences wouldn’t be so stark a month or two from now. On top of that, parts of the East have been seeing temperatures around 10 to 15°F above normal for the time of year.

“Despite all the warnings and preparations urged by the weather community in Oklahoma, nothing could fully prepare us for such a strong wintry blast this early in the season, especially after the unusually warm weather we've had for the last two months or so,” Oklahoma state climatologist Gary McManus said in an email. Highs in the 70s and 80s were fitting since we seemingly went from summer in September and October to winter in the matter of a few hours.”

As the cold seeps more eastward in the coming days, the temperature change won’t be quite as drastic along the East Coast. Instead of Montana’s 35-degree difference, temperatures nearer the coast will be more like 10 to 15°F below normal.

“It will get cold,” Hurley said, but “not nearly as cold.”

The bad news, though, is that the cold looks like it will stick around for a while. NOAA’s Climate Prediction Center handles more long-range forecasts, looking out up to two weeks in advance. Their current 8-14 day temperature outlook map doesn’t look encouraging: 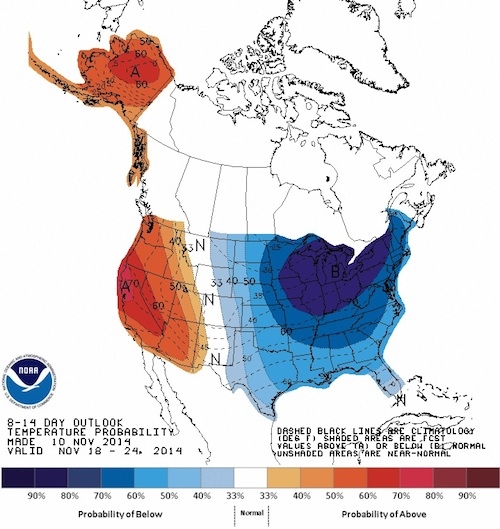 “East of the Rockies, really everything is shaded in blue,” Hurley said. Which means “it’s going to be awhile” until the chill potentially abates.

But, as Hurley points out, at least there don’t seem to be any snowstorms in store during that timeframe (beyond what fell Monday in northern Wisconsin and Michigan).

As the Minneapolis National Weather Service office put it, it could be worse:

You May Also Like:
Waiting for El Niño. Still. Again.
An Inside Look at How Monster Tornadoes Can Form
LEDs the Fast-Rising Heroes of Efficiency
2014 Will Go Down As Hottest In California’s History