Behind the much-publicized report is a much larger 197-page technical document that examines the how, when and where of climate change in the U.S. Some of the impacts outlined are mainstream topics, like agriculture, energy and sea level rise. But others are a little more esoteric, like crime, lost productivity and heat-related deaths. Here are five charts and maps from the technical report that didn’t quite grab headlines, but certainly spotlight the myriad ways climate change will be a drag on the nation’s economy. Each one of them examines the impacts of climate change under a high emissions scenario.

Temperature has a notable impact on crime, particularly violent crime. Data show that as temperatures rise, so does the incidence of violent crime. The same is true for property crime, though to a lesser extent.

While U.S. crime rates have been dropping for decades, the report indicates that climate change — to the tune of a possible 5-9°F increase in temperatures — is likely to drive up violent crime throughout much of the country by the end of the century. The largest increases are in urban areas, but much of the Northeast and Upper Midwest will also see comparatively large absolute changes. 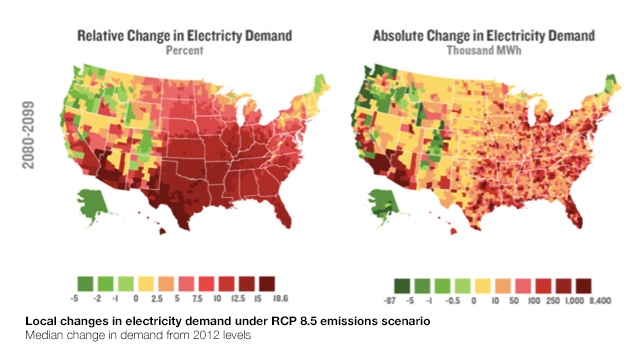 Energy demand is likely to increase 9 percent by century’s end for the U.S. as warmer temperatures will fuel a demand for more air conditioning. Perhaps not surprisingly, the southern third of the country, already the warmest region of the country, is where demand will rise most dramatically. Demand in Texas, Arizona and Florida could increase by as much as 20 percent by 2100. Even regions that will use less energy for heating in the winter as temperatures rise will still see an increased demand for AC.

Because demand will increase at the hottest times on the hottest days, peak electricity generating capacity would also have to increase to avoid outages, which would in turn drive up the price of electricity. More air conditioning use also brings a host of local health and heat problems to cities.

Rising temperatures also present a major health issue for the southern states. Heat already poses a major health problem — it’s the No. 1 weather-related killer in the U.S. — and the Southeast and Southern Plains will feel the brunt of that.

Some counties could see as much as a 6 percent rise in the number of temperature-related deaths. In contrast, the northern third of the country, which has to contend with cold-related deaths, could see a smaller loss of life from weather conditions.

Sea level rise will cost the U.S. up to $3.6 billion annually by the 2030s. By 2100, sea level rise alone could account for an average increase of $21.5 billion in annual property loss for coastal communities, though it could range as high as nearly $28 billion. That number leaves out potential changes in hurricane activity and population growth along the coast, including future ocean fortifications.

The United States of Losses 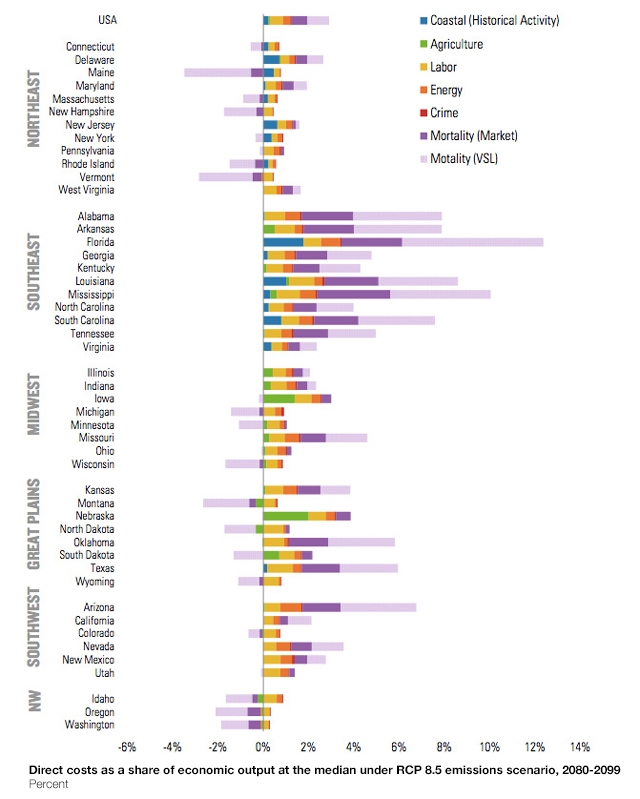 The direct costs of climate change on agriculture, coastal activities, labor, energy, health, and crime will cost the U.S. roughly 2 percent of its GDP. Each state will see effects on its individual GDP depending on what drives its economies and what impacts it’s likely to see.

The Southeast is likely to suffer the worst losses by far, with the six states with the top losses all coming from the region. When hurricane impacts are added, those losses are even higher for the country as a whole and the Southeast in particular. Only Vermont, Washington and Oregon are likely to see any net benefits from climate change.

And the costs outlined in this graphic are only the tip of the iceberg. There are numerous impacts that aren’t quantified (or quantifiable for that matter). Climate change also doesn’t operate in a vacuum, so it’s distinctly possible that climate impacts in other parts of the globe will create ripples in the U.S.