With only one day left in the month, it’s basically official: February’s average carbon dioxide level will be above 400 parts per million, a marker of how much of the greenhouse gas is accumulating in the atmosphere thanks to human emissions. 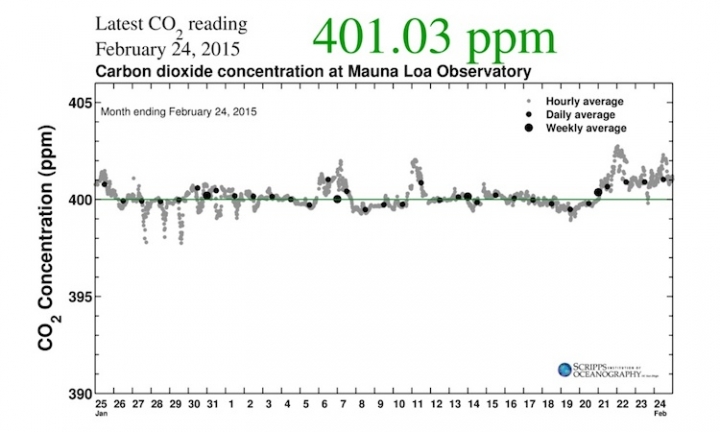 Carbon dioxide levels at the Mauna Loa Observatory in Hawaii for the month of February 2015.
Credit: Scripps Institution of Oceanography

Last year, the monthly average didn’t go above the 400 parts per million (ppm) mark until April, which was the first month in human history with carbon dioxide (CO2) levels that high. Levels stayed that high for a full three months, and they are likely to stay that high for many more this year.

In just a few years, CO2 levels will be above this threshold permanently.

Carbon dioxide levels in the atmosphere have been measured at the observatory atop Hawaii’s Mauna Loa volcano since 1958. That record — called the Keeling Curve, after the scientist who began the measurements, Charles Keeling — has shown the clear rise of CO2 over the decades.

The Keeling Curve first recorded a daily level of 400 ppm on May 9, 2013. The following year, CO2 passed that benchmark in March, and this year, on January 1.

“I am not surprised that we are seeing daily means greater than 400 already popping up regularly. Next year that should start happening in November,” Pieter Tans, a climate scientist with the National Oceanic and Atmospheric Administration, said in an email at the time.

CO2 measurements hovered around the 400 ppm line throughout January, but the monthly average was just below that threshold. While a few days in February had averages below 400 ppm, most have been at or above, as have weekly averages.

“So, despite the normal slow down in CO2 growth rate that occurs at Mauna Loa in January and February of most years, February's monthly mean looks certain to be greater than 400 ppm,” Stephen Walker, a scientist at Scripps Institution of Oceanography, which runs the Mauna Loa observatory, said in an email. 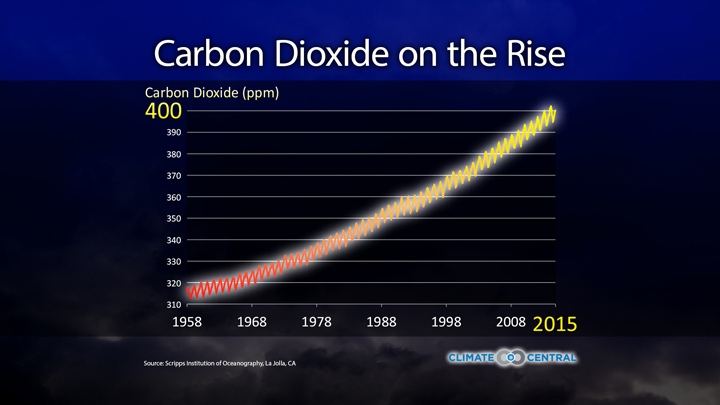 CO2 levels in the atmosphere wax and wane with the seasonal plant cycle. They begin to rise in the fall, as plants in the Northern Hemisphere begin to die off and eventually reach their peak in May. Levels fall through the summer as vegetation sucks up CO2 during photosynthesis.

But those plants can only pull so much CO2 out of the atmosphere, and every year an extra 2 to 3 ppm accumulates in the atmosphere thanks to ever-increasing human emissions. That constant increase is why in just a year or two, CO2 levels will be above 400 ppm year-round.

The 400 ppm mark is of course somewhat symbolic. The increase in warming potential from 399 ppm to 400 ppm is small, but it starkly shows how far CO2 levels have risen from pre-industrial levels, which were around 280 ppm. That increase has caused a global average temperature rise of 1.6°F since the beginning of the 20th century. Some scientists say that to avoid the worst consequences of climate change, that warming needs to stay under 2°C, or 3.6°F.

When the 400 ppm monthly average was reached last April, Ralph Keeling — Charles Keeling’s son and the current scientist in charge of CO2 monitoring at Mauna Loa — said that though the milestone was expected, “it still feels a bit surreal now to be reporting concentrations over 400 ppm. Even though it was pretty much inevitable that we would get to this point, it still takes some getting used to.”

You May Also Like:
NASA Satellites Show Rain In Detail Like Never Before
How Sahara Dust Sustains the Amazon Rainforest, in 3-D
Europe Reforms Cap-And-Trade, Lays Out Climate Vision
For the West, A Winter That Has Felt More Like Spring