2016 is set to be the hottest year on record by a significant margin, with temperatures that are 2.2˚F (1.2˚C) above pre-industrial times, the World Meteorological Organization told diplomats gathered in Marrakech, Morocco, to discuss international action to limit global warming to less than 2˚C by the end of the century. 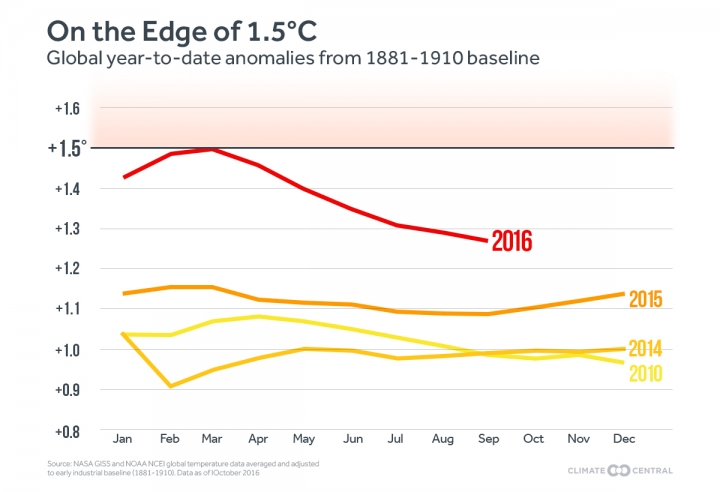 “Another year. Another record. The high temperatures we saw in 2015 are set to be beaten in 2016,” WMO Secretary-General Petteri Taalas said in a statement.

This banner year follows what was the hottest five-year period on record, 2011-2015, as noted in a separate WMO report submitted to the U.N. conference last week. When 2016 takes over the title of hottest year, it will also mean that 16 of the 17 hottest years in the books will have occurred in this century, the only exception being the intense El Niño year of 1998.

Global temperatures in both 2015 and 2016 were also given a small boost from an exceptionally strong El Niño, but the bulk of the heat has built up in the atmosphere over decades, trapped by ever-rising levels of greenhouse gases.

“The extra heat from the powerful El Niño event has disappeared. The heat from global warming will continue,” Taalas said.

While there is still a month and a half left in the year, preliminary temperature data through October suggests that 2016 will easily best 2015’s record temperature. Final temperature data for the month will be released this week by NASA and the National Oceanic and Atmospheric Administration.

Both reports also underscore other major climate milestones, including record-high carbon dioxide levels in the atmosphere and record-low Arctic sea ice levels during many months of this year. 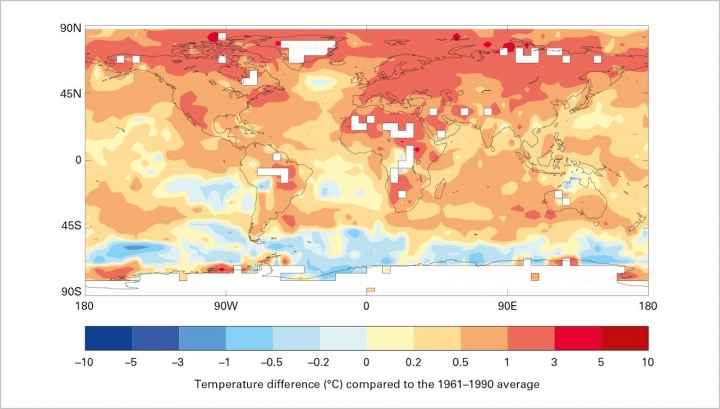 How temperatures in the five-year period from 2011-2015 compared to the long-term average.
Credit: WMO

“We are used to measuring temperature records in fractions of a degree, and so this is different,” Taalas said.

The five-year report, intended to give negotiators a longer-term perspective on recent climate trends, also noted that researchers are increasingly able to tease out the influence of climate change on extreme weather events. Rising temperatures have made some events, like extreme heat waves and rainfalls, more likely and more intense, research has shown.

Negotiators in Morocco are concerned about the election of Donald Trump derailing the international climate action that has been taken thus far, as he has promised to pull the U.S. out of the landmark Paris agreement and to dismantle the Clean Power Plan, which is aimed at reducing domestic greenhouse gas emissions.