2015 Closes in on Becoming the Warmest Year Yet

With each passing month, 2015 is edging closer and closer to locking in its ranking as the warmest year on record for the planet, and the chances of that happening are now at 93 percent, according to calculations from NASA. 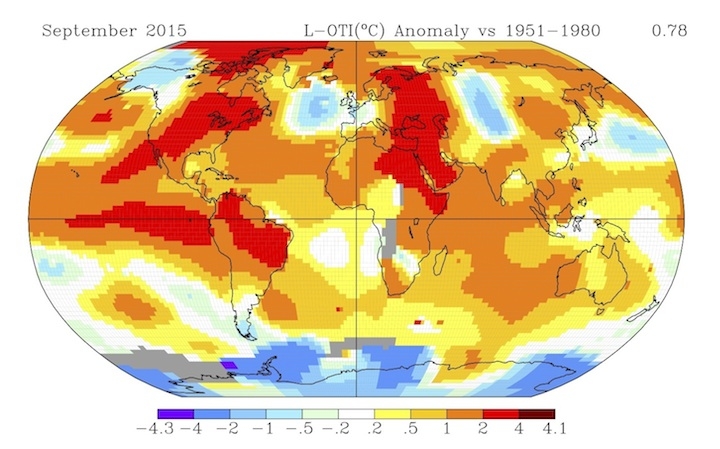 How temperatures around the globe varied from average during September 2015, the second warmest September on record.
Credit: NASA

The strong El Niño event that has taken shape this year – which could rank among the strongest on record – has been a large factor in keeping global temperatures elevated, but the long-term warming signal arising from the buildup of greenhouse gases in the atmosphere has also made such heat records more likely.

According to NASA’s global temperature archive, this September was the second warmest on record (going back to 1880), second only to September 2014. The year-to-date is the warmest on record, and “with three-quarters of the year already done, the ability to change things in the last three months is limited,” Gavin Schmidt, head of NASA’s Goddard Institute for Space Studies, which keeps the temperature records, said in an email.

The additional month of heat raised the likelihood of 2015 besting 2014 as the hottest year from 87 percent at the end of August.

The National Oceanic and Atmospheric Administration, which keeps a separate temperature archive, puts the odds a little higher: In a Sept. 17 blog post, a group of NOAA scientists put the chances of the year becoming the warmest at 97 percent, using data only through July. NOAA’s September global temperature data will be released next week.

Each agency uses different methods to assemble global temperature data, which leads to slightly different numbers for particular monthly temperatures and rankings, though both broadly agree.

September update. Chance of a GISTEMP record warm year in 2015 increased to 93% pic.twitter.com/yrEiKbEXYK

Both groups arrived at their odds by using statistical methods that only took into account how unusually warm the year has been so far and how such year-to-date temperatures have compared to the overall annual average in the existing 134-year record.

Given that El Niño is expected to persist over the next few months, peaking in late fall or early winter, it is unlikely that the remaining three months of the year will be relatively cool enough to erase the lead 2015 has built so far.

All that warmth is having major repercussions around the globe, from bleaching vulnerable coral reefs to exacerbating the historic drought in California, which is also expected to record its warmest year.

The background warming from excess heat trapped in the atmosphere makes it more likely that such hot records will be set and less likely that cold ones will. Of the 15 warmest years on record, 13 have occurred since 2000, according to a Climate Central analysis, while the last year that was record cold was 1911.

You May Also Like:
The Wildlife Photo of Year Tells Climate Change Tale
U.S. Cities We Could Lose to the Sea
Two Maps Show Why El Niño is Rising to 1997-98 Levels
Study Sees Shortfall in Methane Emissions Estimate