2015 One for the Climate Record Books

The long-term warming of the planet, as well as an exceptionally strong El Niño, led to numerous climate records in 2015, including milestones for global temperatures, carbon dioxide levels and ocean heat, according to the World Meteorological Organization’s annual State of the Climate Report.

“The future is happening now,” WMO Secretary-General Petteri Taalas said in a statement. “The alarming rate of change we are now witnessing in our climate as a result of greenhouse gas emissions is unprecedented in modern records.” 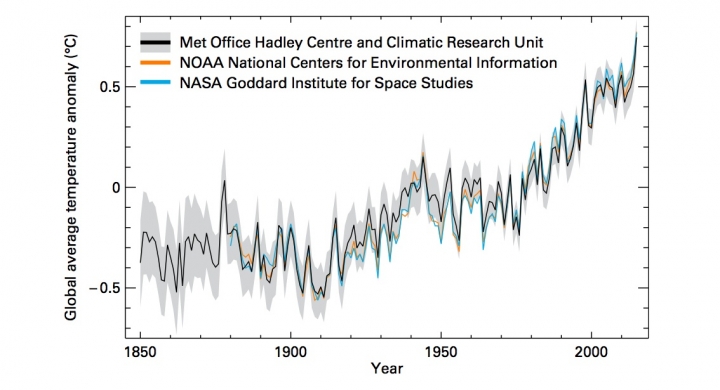 With record heat continuing into the first few months of 2016, these trends reinforce the need to implement the Paris climate agreement, hashed out in December, to start to curb emissions, Taalas said.

“Our planet is sending a powerful message to world leaders to sign and implement the Paris Agreement on climate change and cut greenhouse gases now before we pass the point of no return,” he said.

The WMO report, released Monday, noted that the average global temperature for 2015 was 1.37°F (0.76°C) above the average from 1961-1990, making it the “warmest on record by a clear margin.”  (The WMO’s temperature analysis is based on the records of three agencies: NASA, the U.S. National Oceanic and Atmospheric Administration, and the U.K. Met Office.)

Going back further, that temperature was about 1.8°F (1°C) above the average for the second half of the 19th century, meaning global temperatures are already halfway to 2°C (4°F) above preindustrial levels. The goal of the Paris pact is to keep warming below that mark by century’s end.

While the report was focused on 2015, WMO officials noted that the exceptional heat has continued into 2016. In both the NASA and NOAA records, January and February were both record warm, with February besting January as the most anomalously warm month ever recorded, going back 135 years.

“The startlingly high temperatures so far in 2016 have sent shockwaves around the climate science community,” David Carlson, director of the World Climate Research Programme, co-sponsored by the WMO, said in a statement.

Of the excess heat trapped by greenhouse gases, 93 percent is stored in the oceans. The heat content of the ocean going down to a depth of 6,500 feet (2,000 meters) also hit a new record high last year, the report noted. 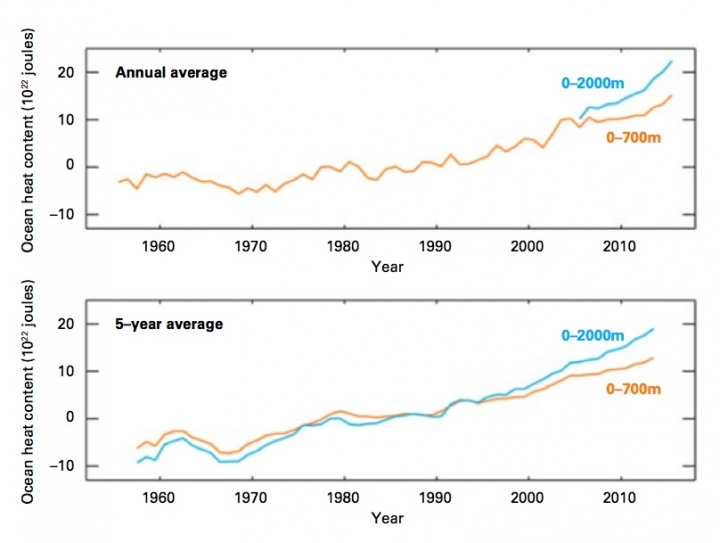 Ocean heating accounts for about 40 percent of global sea level rise, because water expands as it warms up; global average sea level from January through November was also a record high, the WMO said.

Hotter ocean waters also contributed to a global coral bleaching event that is still ongoing, and scientists are concerned that a growing amount of that heat trapped in the ocean could be released into the atmosphere, fueling even more and faster warming.

The report, released ahead of World Meteorological Day, on March 23, also chronicled the various weather extremes that buffeted parts of the world, some of which were influenced by the strong El Niño.

Such events included major heat waves and crippling drought in South Africa, heavy monsoon rains that led to extensive flooding in parts of India, drier conditions and major wildfires in Indonesia, and above-average tropical cyclone activity in much of the Pacific Ocean basin.

Such extremes have led to millions facing food and water shortages, as well as thousands of deaths globally, pointing to the need to not only mitigate greenhouse gas emissions, but to also invest in adaptation and improving the forecast systems of developing countries, Taalas said in his forward to the report.

You May Also Like:
February, Winter Were Record Warm For Planet
Waters Off New York Opened For Offshore Wind Farm
How the World Has Changed Since Paris Climate Pact
U.S. Blocks Oil, Gas Drilling in Atlantic Coastal Waters