By the reckoning of the three main agencies that track global temperature, 2015 has so far been the warmest year in more than a century. Coming immediately after the hottest year on record, the ranking serves as a reminder of how much the globe’s overall temperature has risen thanks to the ever-growing amounts of greenhouse gases in the atmosphere.

With the year only a quarter through, it’s difficult to say definitively how 2015 as a whole will turn out. But with an El Niño event currently in place that could help keep temperatures at record or near-record levels for the remainder of the year, 2015 may be poised to eclipse 2014’s newly minted record, though climate scientists are cautious on such pronouncements. 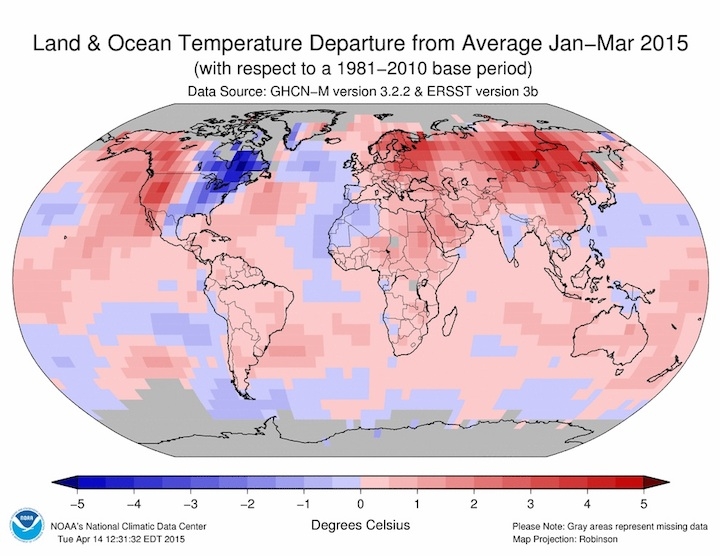 How surface temperatures around the world varied from the 20th century average over the period from January to March 2015.
Credit: NOAA

“We expect that we are going to get more warm years, and just as with 2014, records will be broken increasingly in the future. But perhaps not every year,” said Gavin Schmidt, who leads NASA’s Goddard Institute of Space Studies.

The U.S. National Oceanic and Atmospheric Administration released its global temperature records for this March on Friday, ranking it as the warmest March in their 136-year archive. The global average temperature for the month was 1.53°F above the 20th century average and beat the previous record holder (March 2010) by almost a tenth of a degree.

The Japan Meteorological Agency also ranked March as the hottest in its records, while NASA put it in 3rd place, behind 2010 and 2002. Each agency handles temperature data in slightly different ways, which can lead to different rankings for months and years, though there is broad agreement between all three on the overall warming trend.

Despite the slight differences for March’s temperature, all three agencies ranked the year to date as the hottest in the books, with large areas of warmth over Russia and the Pacific Ocean. Those spots, particularly the Pacific, also helped boost 2014 to the top of the standings.

NOAA measured the average temperature from January through March as about 1.5°F above the 20th century average, surpassing 2002 by about a tenth of a degree.

Schmidt said in an email that the warmth displayed so far this year is “a reflection of two issues: the late 2014 start to the El Niño-like conditions, and the North Pacific warming on a baseline of slowly warming temperatures almost everywhere.”

That baseline of slow warming comes courtesy of a continued rise in greenhouse gas emissions that shows little sign of abating. The increase of the heat-trapping gases has elevated Earth’s temperature by 1.6°F since the beginning of the 20th century. Some scientists say that to avoid the worst consequences of climate change, that warming needs to stay under 2°C, or 3.6°F.

The latest El Niño forecast from NOAA gives a 70 percent chance of the event hanging on through the summer and a 60 percent chance that it will last through the fall. El Niño tends to boost global temperatures, as it did most starkly in 1998, the only year in the top 10 warmest that didn’t occur in the 21st century.

“If El Niño continues throughout the summer and fall, as currently projected, and if the warm `blob’ remains in the northeast Pacific Ocean, as it has been for more than a year now, it seems quite likely that Earth will continue to see record or near-record high temperatures over the next several months,” said Jessica Blunden , a climate scientist with ERT, Inc., at NOAA’s National Climatic Data Center.

Some scientists posit that the extreme warmth of surface waters in the Pacific is a sign that excess heat stored in the deep ocean over the past few decades is now emerging and putting an end to the so-called pause in the rise of global surface temperatures.

Even with that slowdown in the rate of land-surface warming, 13 of the 15 hottest years on record have occurred this century, and no record cold year has been set since 1911.

While Schmidt said that the current El Niño suggests continued warmth for the year, he noted that some years can start out warm, but cool, relatively speaking, as they go on. So “it's too early to start talking about what the calendar year anomaly will be,” he said. (The opposite occurred in 2014, with the year warming as it went on as the El Niño event developed.)

You May Also Like:
El Niño Is Hanging On: What that Means for Hurricanes
Scientists Pore Over Warm West, Cold East Divide
Defecting from the Power Grid? Unlikely, Analysts Say
U.S. Greenhouse Gas Emissions Spiked 2 Percent in 2013