Odds Increasing That 2015 Will Be Warmest Year

August continued the parade of months in 2015 at or near the top of the temperature rankings, according to NASA records, further upping the odds that the year as a whole will be the warmest on record, beating out 2014.

The year’s potentially chart-topping heat has been driven in part by an El Niño that could rival the strongest on record, but it is also something that is more likely to happen now thanks to the steady accumulation of heat in the atmosphere trapped by greenhouse gases. 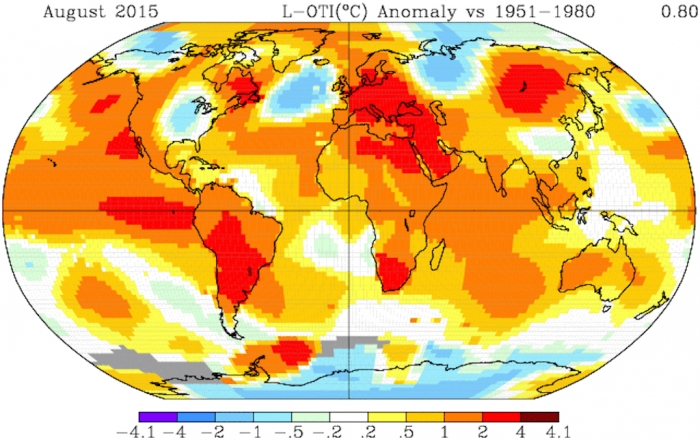 How temperatures across the world differed from normal during August 2015.

The August temperature numbers also come in at a time when Arctic sea ice extent is heading toward its annual summer minimum, likely to happen this week. Scientists who monitor the sea ice expect this year’s minimum will rank as the fourth lowest in records extending back to the late 1970s.

The monthly global temperature records kept by NASA show this August was the second hottest on record going back to 1880, only a hair behind August 2014. The summer as a whole was also the warmest. El Niño ramped up throughout  the season, with the World Meteorological Organization and the U.S. National Oceanic and Atmospheric Administration (NOAA) both declaring it a strong event within the last couple of weeks.

Winter was also the hottest on record according to NASA’s numbers, while spring tied with 2014 for second place (behind the spring of 2010).

With El Niño expected to persist and remain strong through fall and winter, there is a good chance that the year as a whole will displace 2014 as the warmest year globally.

Gavin Schmidt, the climate scientist who heads NASA’s Goddard Institute for Space Studies, which keeps the temperature records, put the chances that 2015 will take the top spot at 87 percent based on the temperature through August. Last month, though, a NOAA-affiliated scientist said, “I would say [we’re] 99 percent certain that it’s going to be the warmest year on record.”

Chance of a record warm year in the 2015 GISTEMP index have increased to 87%. pic.twitter.com/29AoeNwC9u

NOAA, which keeps its own temperature records and rankings, will release its August numbers on Thursday.

The chances are also good that the year will be the warmest on record for four Western states: California, Nevada, Oregon and Washington.

Heat has helped to drive California’s deep drought. It was a factor in the state recording its lowest mountain snowpack in not only 120 years of measurements, but in at least 500 years, according to a new study that looked at historical tree ring records.

The heat has also intensified the dry conditions that have led to devastating wildfires, such as the Valley Fire that exploded in size over the weekend and has led to at least one death and destroyed hundreds of homes. There is hope that El Niño will bring California more rains that could begin to quench the parched state.

Whether local or global, records for warmest year are best understood in the context of the overall warming trend fueled by human activities that cause heat-trapping greenhouse gases to build up in the atmosphere.

Carbon dioxide levels have risen from a preindustrial level of about 280 parts per million to nearly 400 ppm today; CO2 concentrations this year stayed above the 400 ppm mark for six months, an increase over last year’s three months that shows the steady uptick.

This well-established global warming trend effectively loads the dice toward heat records as time goes on. Thirteen of the 15 warmest years have occurred since 2000, a circumstance that would only have 1-in-27 million odds of occurring without warming, according to a Climate Central analysis.

The last time there was a global record for coldest year? 1911.