2014 on Track to be Hottest Year on Record

Just days after NASA data showed that August 2014 was the warmest August on record, the National Oceanic and Atmospheric Administration confirmed the ranking and raised the ante: There’s a good chance 2014 could become the warmest year on record. 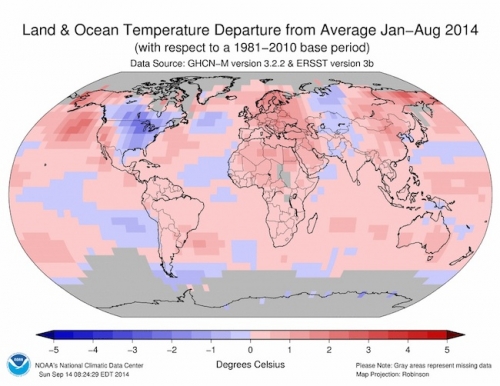 Temperature departures around the world for the period from January-August 2014, which ranks as the 3rd warmest such period on record. Click image to enlarge. Credit: NOAA

“If we continue a consistent departure from average for the rest of 2014, we will edge out 2010 as the warmest year on record,” said Jake Crouch, a climatologist with NOAA’s National Climatic Data Center, during a press briefing Thursday.

Specifically, if each of the remaining months of the year ranks among the top five warmest, 2014 will take the top spot, he said.

The news may come as a surprise to those living in the eastern portion of the U.S., which has seen a relatively cool year so far, with a frigid winter followed by a near-average summer (which seemed extremely mild compared to recent steamy summers). But the global picture shows that the East was “pretty much the only land area in the globe that had cooler-than-average temperatures,” Crouch said. (The western U.S., on the other hand, has been baking.) 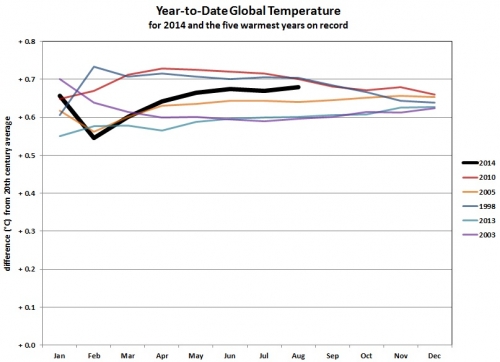 The temperatures so far in 2014 compared to the top 5 warmest years on record.
Click image to enlarge. Credit: NOAA

The oceans have fueled much of this year’s warmth, with parts of the Indian Ocean and central Pacific, among other spots, recording their record warmest conditions in both August and the entire January-August period. “And most of the oceans were much warmer than average” during that period, Crouch said.

The Pacific warmth is due in part to the El Nino that has been struggling to develop there for much of the year. An El Nino is defined by warmer-than-average sea surface temperatures in the tropical central and eastern Pacific and tends to raise global temperatures; some El Nino years rank among the warmest on record. 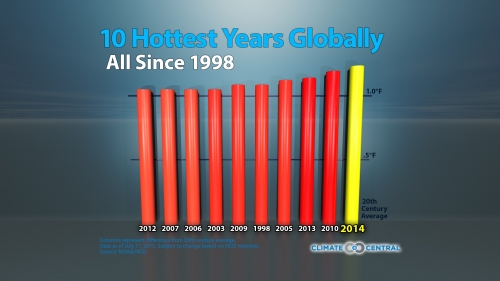 While some argue that a weak El Nino has arrived, it has not yet been officially declared by NOAA’s Climate Prediction Center, which makes such a ruling when the temperatures in a particular region of the eastern Pacific reach 0.5°C (0.9°F) above normal for more than a month and when the atmospheric patterns typically seen with an El Nino are in place. These patterns haven’t been seen yet, and the temperatures have only recently crossed the threshold, said CPC scientist Dan Collins during the briefing.

If the El Nino does officially develop, which has been given a 65 percent chance of occurring over the rest of the year, “that’s another sign that global conditions will continue to be warm for the rest of 2014,” Crouch said, bolstering the chances that 2014 will top the record books.

You May Also Like:
NASA Ranks This August as Warmest on Record
The $90 Trillion Climate-Stabilizing Cookbook
What Will Survive in Hot, Acidic Oceans?
Arctic Sea Ice to Reach Sixth Lowest Extent on Record