November in Books; 2014 On Pace for Hottest Year

With November’s temperature numbers in the books, 2014 is on track to be the hottest year ever recorded, newly released data from NASA and the National Oceanic and Atmospheric Administration show.

During the month, the patterns that have been in place for much of the year held fast: While the eastern U.S. was plunged into a deep freeze, the world as a whole continued warming, fueled by the rise of greenhouse gases in the atmosphere. 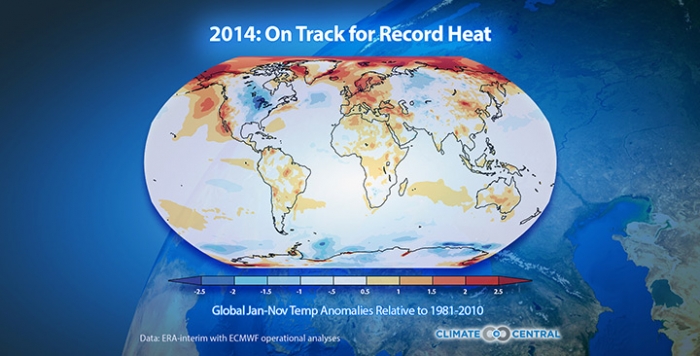 November didn’t set a global warm mark (as August, September and October did), in part because oceans cooled slightly and because of the cold that covered much of North America, said Jessica Blunden, a climate scientist with ERT, Inc., at NOAA’s National Climatic Data Center. But the month still came in 1.17°F above average, according to both NOAA and NASA records. That’s enough to keep the year on track to set the record.

The 11 months of the year to date are the hottest such period on record, according to NOAA, coming in at 1.22°F above the 20th century average of 57°F. For 2014 to set the mark, Blunden said it would need to be only around the 18th warmest December on record, which is a definite possibility.

No matter how December impacts the final tally, it will mean that 14 of the 15 hottest years on record have occurred in the 21st century (the exception was the blockbuster El Niño year of 1998). That clustering of hot years in the two most recent decades highlights the long-term warming trend. And as some climate scientists — such as Gavin Schmidt, director of NASA’s Goddard Institute of Space Studies, which keeps NASA’s temperature data — like to note, that’s far more important than any monthly or yearly temperature record.

Another indicator of that long-term warming trend is the lack of record cold years for more than a century, despite the chill across the eastern U.S. The world’s last record cold year was 1911, according to a Climate Central analysis. Meanwhile, over that same period, 18 records for hottest years were set; 2014 would make the 19th. 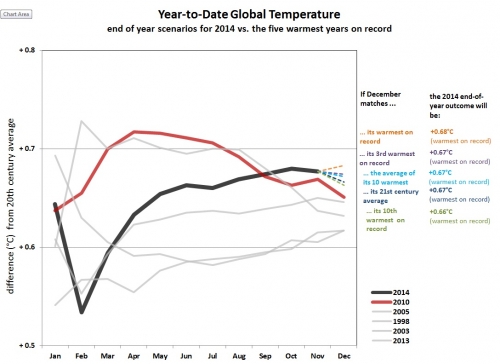 How 2014 could rank in terms of temperature given different possible December outcomes. Click image to enlarge. Credit: NOAA

November was unusually chilly in the eastern U.S., ranking as the 16th coldest November in the records, which extend back to 1895, and the coldest November since 2000. The deep freeze was due to several bouts of Arctic air that descended over a broad swath of the country to the east of the Rockies, leading to stark 24-hour temperature changes and the largest November snow cover in the 49-year satellite record.

The West, however, saw its continued pattern of warmer-than-normal temperatures, with California recording its ninth warmest November. All year, the state has been baking under a ridge of high pressure that has brought record temperatures and exacerbated the three-year-long drought. California is all but certain to see it’s warmest year on record.

Helping to elevate California’s temperatures are the unusually warm ocean waters that have been in place up and down the West Coast. Large areas of record warm waters have also covered other parts of the Pacific Ocean, as well as the Indian Ocean. Some of these areas in the equatorial Pacific have been influenced by a weak El Niño event that some say has arrived, but has not yet been officially declared. All of these warm ocean waters are a large part of what is fueling the planet’s record heat.

You May Also Like:
Climate Accord Struck In Lima; Key Decisions Postponed
CO2 Takes Just 10 Years to Reach Planet’s Peak Heat
WMO Warns Lima Delegates 2014 May Be Hottest Year
Clues Show How Green Electricity May Be in 2050
Report Maps Out Decarbonization Plan for U.S.