The National Oceanic and Atmospheric Administration predicts that the 2013 hurricane season, which begins on June 1, is likely to be somewhere between active and extremely active, with between 13 and 20 named storms – those with sustained winds above 39 m.p.h. By comparison, in 2012 — the year of Isaac and Sandy — there were 19 named storms. 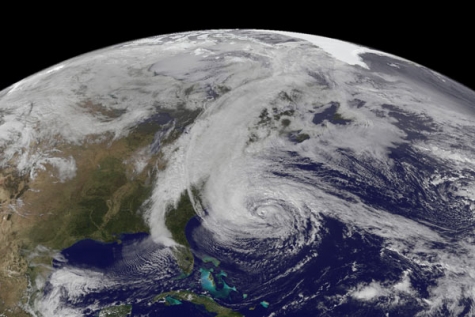 What NOAA could not say was how many of these storms would make landfall, which is what people really care about. If the season is below active in activity but more storms come ashore, the level of damage and injury will almost certainly be greater than in an active season in which most of the storms stay at sea.

But that level of prediction is beyond the level of current science. “It cannot be done,” said acting NOAA administrator Kathryn Sullivan at a press conference. “Anyone could be hit.”

As for the most powerful storms, the last hurricane of Category 3 or higher to reach landfall was Wilma in 2005. Why hasn’t there been another since? “Nature may know the answer to that, but we don’t,” Sullivan said.

In 2012, only one hurricane, Isaac, made landfall in the U.S. Sandy, on the other hand, had transitioned into a hybrid storm known as a post-tropical cyclone. Sandy’s destruction was so great, due mostly to its powerful storm surge, that the agency is rethinking its approach to surge forecasts.

Uncertainty about what percentage of tropical storms will make landfall is one caveat that goes with any hurricane forecast. Another is that conditions could change as hurricane season continues for the next six months. In 2012, the preseason forecast called for between nine and 15 named storms, well below the 19 that eventually formed. By August, with the season half over, the number had increased to 12-17. Overall, August through October sees the largest number of storms.

The higher-than normal activity forecast by NOAA is based on three factors, all of which favor more, rather than fewer, tropical storms. The first is higher-than-normal sea-surface temperatures in the Atlantic, which supplies energy for tropical storms. The second is that hurricane activity has historically waxed and waned in cycles that last between 25 and 40 years. An active cycle began in 1995, which suggests we should expect more storms than average until 2020, at least. Finally, there’s no evidence of an El Nino event in the Pacific Ocean this summer; El Nino's can strengthen upper-level winds across the tropical North Atlantic, which can tear hurricanes apart before they can gather strength.

All of these tend to increase hurricane activity, and, said Gerry Bell, NOAA’s lead outlook forecaster, “we see no meaningful climate factors that would suppress activity.”

The main theme from NOAA, however, was not how many tropical storms we might expect.

“The news is about preparedness,” Sullivan said. Given that any community along the Atlantic or Gulf Coast is vulnerable to a tropical storm or hurricane in any season — and that the consequences can penetrate far inland, with heavy rains, winds and flood — “we encourage families and businesses to make or refresh their disaster plans today,” he said.