While the eastern United States shivers through an early spring cold snap, the globe as a whole continues to warm. The World Meteorological Organization announced Monday that they had confirmed that 2013 was the sixth warmest year on record, tied with 2007, in their annual report on the world’s weather and climate. 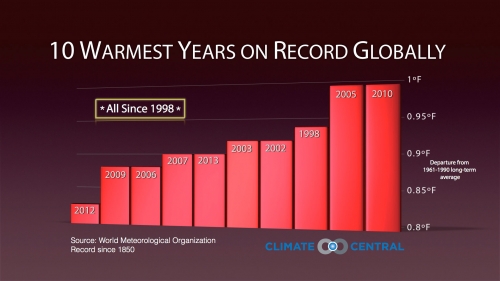 2013 was the 6th warmest year on record according to the World Meteorological Organization, which uses data from NASA, the National Oceanic and Atmospheric Administration and the UK Met Office to make its ranking. All but one of the 10 warmest years on record have occured in the 21st century.
Click image to enlarge. Credit: Climate Central

The report catalogued the numerous instances of extreme weather felt around the globe last year, from drought in Australia and South America to a rare Middle Eastern snowstorm to Typhoon Haiyan, which was one of the strongest storms to ever make landfall when it hit the Philippines in November. The WMO report even linked Haiyan’s destruction to climate change, saying that sea level rise exacerbated the flooding the island nation experienced. The extreme heat in Australia was also helped along by human-induced warming, an accompanying study found.

“There is no standstill in global warming,” WMO Secretary-General Michel Jarraud said in a statement.

According to the WMO’s rankings, which are based on data from NASA, the National Oceanic and Atmospheric Administration (NOAA) and the UK’s Met Office, 2013 was 0.9°F above the average global temperature from 1961-1990, tying it with 2007 for sixth place in the top 10 warmest years on record.

That ranking is made all the more noteworthy by the fact that neither a La Niña nor an El Niño was in place last year. During a  La Niña, sea surface temperatures in the tropical Pacific Ocean are colder than normal, while during an El Niño they are warmer than normal, both of which influence weather patterns around the world. The year is among the four warmest ENSO-neutral years on record, the WMO said. (ENSO stands for the El Nino Southern Oscillation, the overarching name for the phenomenon.)

NASA and NOAA released their own rankings for 2013 earlier this year, placing it seventh and fourth warmest, respectively. The differences in the rankings have to do with how each of the three data sets account for missing data, said Michael Mann, a climatologist at Penn State University.

Mann added that the exact rankings between year, which differ by less than 0.2°F, aren’t as important as the overall picture of warming.

“The key point here is that, no matter how you slice it, 2013 was among the top 10 warmest years, as have been most recent years,” Mann told Climate Central in an email.

That warmth is likely to continue this year and next, and the possible development of an El Niño later this fall, as is predicted by NOAA, “likely means we’ll set a new global temperature record,” Mann said.

The Southern Hemisphere saw particular warmth: Australia had its hottest year on record, while Argentina saw its second hottest. Europe also experienced its sixth warmest year on record, despite a cooler-than-normal spring in many places. The heatwaves that washed across the continent in summer offset that coolness.

Tacked on to the WMO report was a study released last summer that looked at the possible role that human-induced climate change played in the hot summer Australia had in 2013 and found that it increased the likelihood of such heat fivefold.

“These types of extreme Australian summers become even more frequent in simulations of the future under global warming,” the authors of that study, Sophie Lewis and David Karoly of the ARC Centre of Excellence for Climate System Science at the University of Melbourne, wrote.

Other milestones noted in the WMO report were the surpassing of the symbolic 400 parts per million milestone of atmospheric carbon dioxide in May 2013, a threshold already passed this year.

Global average sea level also reached a new high in March of last year based on preliminary data, the WMO said, as the rate of rise increased by more than 0.1 inches each year from 2001-2010. Much of this rise is attributed to the expansion of ocean waters as they have absorbed about 93 percent of the excess heat in the Earth system since 1971. Since 2000, more of this excess heat has been absorbed at deeper levels of the ocean, which could have to do with changes in atmospheric and ocean circulation, the report said.

Sea level rise was particularly an issue in the Philippines, where the rates of rise are some of the highest in the world’s oceans, topping 0.8 inches per year over the past decade. That higher sea level “contributed to the enormous devastation in parts of the Philippine islands when Typhoon Haiyan struck in November and caused a massive storm surge,” the WMO report said.

The extremes of weather are already piling up in 2014, as much of the eastern U.S. was kept in a deep chill all winter by Arctic air spilling over North America, while parts of Europe were buffeted by storm after storm. Australia continued its warm streak with a major heatwave gripping the country in January, and drought continues to plague parts of South America.

You May Also Like
Drilling, Fracking Efficiency Fuels Oil and Gas Boom
The Best View You’ll See of the Spring Equinox
A Cold U.S. Winter for Sure, but 8th Warmest Globally
White House Brings Together Big Data & Climate Change