What 2 Million Years of Temps Say About the Future

That the climate has changed before is a given. So is the reality that humans are changing it now by dumping carbon pollution in the atmosphere.

The deep history of temperature changes can inform us about what comes next for our fair planet and new research published Monday in Nature provides a continuous 2-million-year record of the past. It shows that in the long term, the world could be in for more warming than expected even if we cap greenhouse gas emissions today. 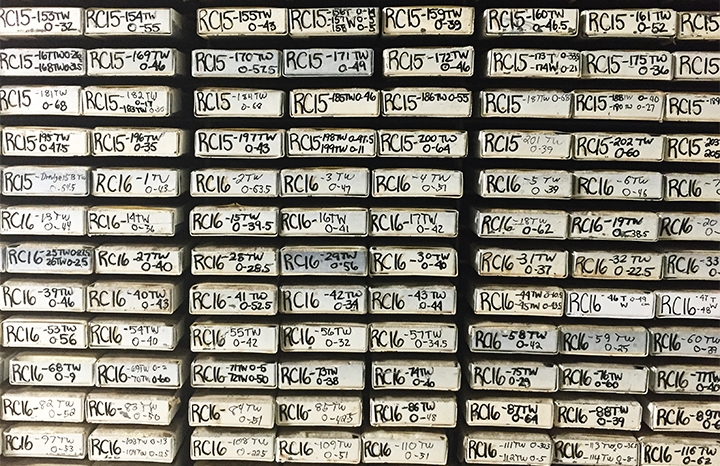 Boxes of ocean sediment cores, which are used for past climate reconstructions.
Credit: Cynthia Thomson

Numerous other papers have shown a strong link between carbon dioxide in the atmosphere and temperature fluctuations. It’s a process that’s taken place for eons and has largely been driven by natural factors. Humans have altered that equation, however, pouring enough carbon dioxide into the atmosphere so that levels are higher than they’ve been in millions of years.

A temperature record of the distant past is a bit harder to come by, though. Carolyn Snyder, the author of the new paper, used a number of records from ocean sediment and ice cores for the new reconstruction. The resulting paper came out of her PhD research while at Stanford.

It shows the globe cooled continuously until about 1.2 million years ago when it entered a much more tumultuous (at least on geological timescales) cycle of warming and cooling on roughly 100,000-year intervals. The rise and fall of temperatures during that time is closely tied to carbon dioxide levels in the atmosphere.

That coupling is still apparent today as the world has warmed about 1.8°F since the start of the Industrial Revolution as humans have steadily added carbon pollution to the atmosphere. Snyder’s research provides a new estimate for how much more the planet could warm in the centuries to come.

Based on where we are today, with carbon dioxide above 400 parts per million, her findings indicate that the world could be in for more global warming than scientists currently anticipate. If the relationship between greenhouse gas levels and global temperatures from the past 800,000 years are similar into the future, it suggests that today's greenhouse gas levels may have already committed the Earth to 9°F (5°C) more warming over the coming millennia.

“Although this research does not provide a forecast or prediction of future global warming, there are broad, general insights that can be drawn from the past,” Snyder said in an email.

The findings are based on a measure called earth system sensitivity, or how much the planet will warm per doubling of carbon dioxide. This study indicates that it could be as high as 16.2°F (9°C), nearly double most previous estimates. It’s a disconcerting finding, but also one that, because it’s so dramatic, will need to be further dissected.

“The estimate of earth system sensitivity is so much higher than the prevailing estimates that one has to consider it somewhat of an outlier, and treat it with an appropriate level of skepticism,” Michael Mann, a paleoclimate expert at Penn State, said. “I regard the study as provocative and interesting, but the quantitative findings must be viewed rather skeptically until the analysis has been thoroughly vetted by the scientific community.”

While scientists might disagree on a degree or two of warming millennia down the road, it is clear that human-driven carbon pollution is now one of the dominant drivers of earth’s climate. Continuing to dump carbon into the atmosphere has already altered the climate and continuing to do so will pose further risks not just from increasing temperatures but rising seas, more erratic weather and ocean acidification.

Those impacts are worrisome enough. But the long-term impacts speak to just how lasting our influence on the planet will be. It will take millennia of global warming to balance out all the carbon pollution we’ve already added to the atmosphere, yet another sign we’ve entered a geological epoch shaped by humanity. It means that while we’ll be long gone, future generations will be left to deal with the fallout from our actions today.