The Bright Side of 13 Years of Clouds in 1 Map

Cloudy days can be a bit of a downer. But when you add them all from nearly 13 years of measurements, the bright side becomes more apparent.

NASA Earth Observatory just published a map that uses data collected between July 2002 and April 2015 to give an unparalleled view of the world’s cloudy (and sunny) spots. 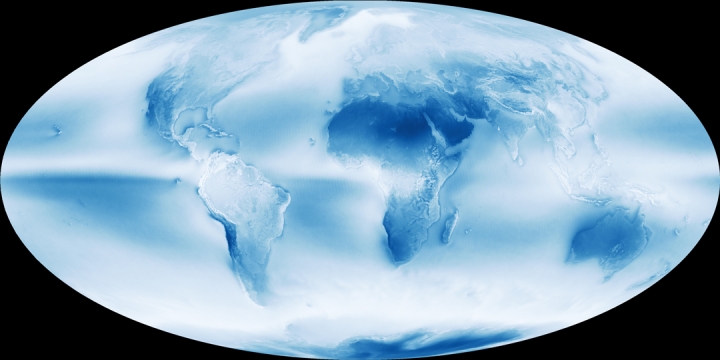 One thing that’s immediately apparent is that the world is a pretty cloudy place. It’s no surprise the U.K. — renowned for its dreary weather — appears in white, indicating frequent clouds. Ditto for the Amazon rainforest, which requires copious clouds for its prodigious rain.

On the flip side, the Sahara, Atacama, Arabian and their fellow deserts (including Antarctica) are basically cloud free. Australia and the western U.S. are also light on cloud cover.

Aside from giving a sense of the globe’s overall cloudiness, the map also reveals key features of the climate system. The band of cloudiness just around the equator generally represents the Intertropical Convergence Zone, a girdle of thunderstorms around the earth that form there thanks to warm, moist air lifting off the ocean. The ITCZ, as it’s known in climatespeak, generally drifts back and forth across the equator with the seasons.

In comparison, dry air generally subsides from 15-30 degrees north and south of the equator. Not surprisingly, that’s where most of the world’s deserts are located.

Mountain ranges, coasts and other land features also influence how clouds move across the planet. The Tibetan Plateau stays mostly sunny because it’s in the rain shadow of the Himalaya Mountains to the south.

Clouds are a big part of the climate system, but they’re also one of the least understood, particularly when it comes to climate change. Low-level clouds tend to cool the planet while high-level clouds have the opposite effect. How climate change will influence all clouds in the future is still a bit of mystery because the processes of cloud formation are difficult to model, let alone modeling specific types of clouds (of which there are 10, just in case you were wondering).

The data in the map comes from NASA’s Aqua satellite, which provides enough data from its MODIS sensor to make a cloud map every day of the year, including holidays, because satellites don’t take a day off. So there’s a lot of data behind the current map, though it doesn’t provide much in the way of daily or seasonal variations. Luckily, NASA’s data is freely available so you can go check cloud cover on oh, February 15, 2011. But if 365 days of clouds is a bit too much information, we’ve also pared it down to just 12 months so you can see the seasonal shifts around the globe.

You May Also Like:
MIT: ‘Massive’ Solar Expansion Critical for Climate
Sea Level Rise Is On the Up and Up
‘Steel on the Water’ Critical for Offshore Wind in U.S.