Past 12 Months Tied for Warmest on Record

April capped a 12-month period that tied the warmest such stretch on record, according to data released Tuesday.

That period, going back to May 2014, tied the previous record holder, the 12 months from April 2014 to March 2015. Of the 10 warmest 12-month periods on record, nine occurred in the past two years, most of them in back-to-back stretches. 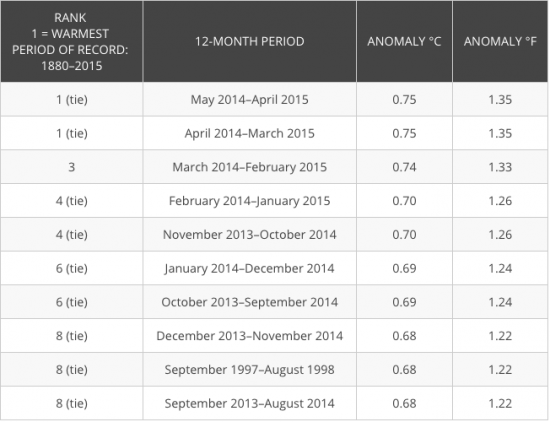 The clustering of such warm periods is a marker of how much global temperatures have risen thanks to the human-driven buildup of heat-trapping gases in the Earth’s atmosphere.

April’s heat also ensured that 2015 is still the warmest year-to-date on record. And with a healthy looking El Nino that could further intensify in the coming months, the chances that the year as a whole could best last year’s record-breaking temperature are boosted.

Data released Tuesday by the National Oceanic and Atmospheric Administration (NOAA) ranked this April as the fourth-warmest April in the past 136 years, with an average global temperature 1.33°F above the 20th century average. NASA’s similar database put the month tied for the third-warmest April; each agency treats global temperature data in slightly different ways, creating small differences, but overall broad agreement.

The reason April dipped slightly in the monthly rankings compared to the winter months, which all ranked as the warmest or second warmest such months, is because of cooler land surface temperatures, Jessica Blunden, a climate scientist with ERT, Inc., at the NOAA’s National Center for Environmental Information, said. In Australia, for example, a March that ranked as the eighth warmest was followed by an April that was 88th warmest.

“While there were a lot of warm areas, we didn't see as much widespread record warmth,” Blunden said in an email. 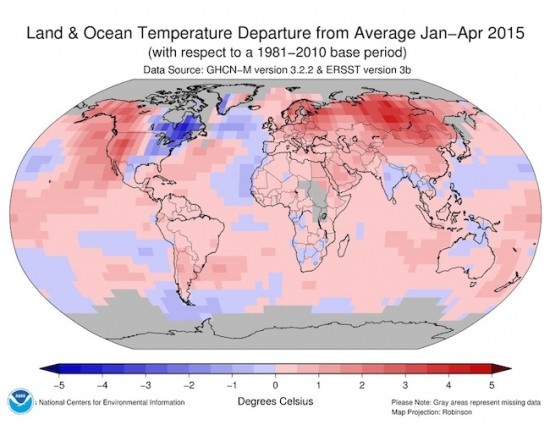 The areas of the world that were colder or hotter than normal from January to April 2015.
Click image to enlarge. Credit: NOAA

“The early months drove the year-to-date temperature,” Blunden said. “And we can attribute a lot of the warmth to the continuing unusually warm ocean temperatures,” which change much more slowly than land temperatures.

While the majority of the year still has to play out, the fact that an El Nino is in place and is expected to hang around through the end of the year tips the odds in favor of continued record warmth.

Even if 2015 doesn’t take the record, it is likely to place among the hottest years. Of the 15 warmest years on record, 13 have occurred in the 21st century, which shows the clear warming effect that accumulating carbon dioxide and other greenhouse gases have had on global temperatures. No record-cold year has been observed since 1911.

You May Also Like:
Take a Look at One of the First Climate Models In Action
Climate Change May Put Power Grid at Risk in the West
Heat is Piling Up in the Depths of the Indian Ocean
Canada Sets Goal to Cut Emissions by 2030