Hurricane Sandy was one of the largest storms to hit the northeast U.S. in recorded history, killing 159, knocking out power to millions, and causing $70 billion in damage in eight states. Sandy also put the vulnerability of critical infrastructure in stark relief by paralyzing subways, trains, road and air traffic, flooding hospitals, crippling electrical substations, and shutting down power and water to tens of millions of people. But one of the larger infrastructure failures is less appreciated: sewage overflow.

Six months after Sandy, data from the eight hardest hit states shows that 11 billion gallons of untreated and partially treated sewage flowed into rivers, bays, canals, and in some cases, city streets, largely as a result of record storm-surge flooding that swamped the region’s major sewage treatment facilities. To put that in perspective, 11 billion gallons is equal to New York’s Central Park stacked 41 feet high with sewage, or more than 50 times the BP Deepwater Horizon oil spill. The vast majority of that sewage flowed into the waters of New York City and northern New Jersey in the days and weeks during and after the storm.

Our analysis of sewage-spill data provided by state agencies and individual treatment plant operators shows that: 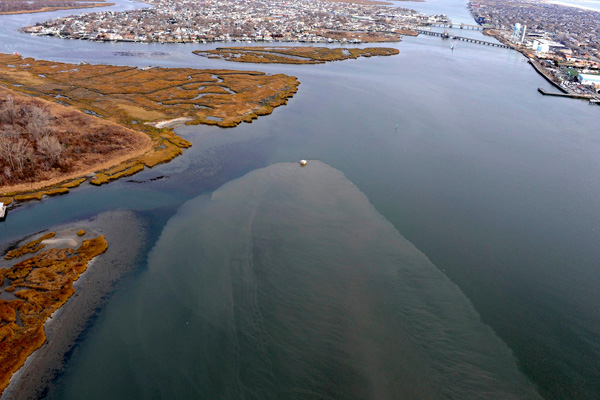 Damage at the Bay Park Sewage Treatment Plant in East Rockaway, N.Y., from Hurricane Sandy resulted in over 2 billion gallons of sewage overflow. Some of this overflow (an estimated 68 million gallons) was released adjacent to the Western Long Island South Shore Estuary. Credit: Doug Kuntz.

Climate Central is unable to estimate the total costs of repairing sewage systems impacted by Sandy, but according to state authorities:

The Passaic Valley Sewerage Commission in Newark reported the largest spill of all. During the week after the storm, 840 million gallons of untreated sewage flowed into Newark Bay. It took another two weeks to get most of the treatment up and running, and during that time another 3 billion gallons of partially treated sewage overflowed.

Middlesex County reported another 1.1 billions gallons of untreated sewage discharge to local waters, due to complications related to Hurricane Sandy.

Sewage treatment plants are usually placed near water in low-lying areas so that sewage can be piped to the plant via gravity and treated sewage can be easily discharged into receiving waters. These key factors in plant locations make them especially vulnerable to storm surges and coastal flooding. Compounding the inherent risk of their low-lying locations, many treatment plants have expansive, underground labyrinths of pipes, holding tanks and pumps that can remain waterlogged and incapacitated long after floodwaters recede. They also typically discharge their treated wastewater through large underwater pipes, which can cause facilities to flood from the inside as waters rise, long before the surface water levels overrun the outside of the structures.

Climate change is making sewage treatment plants more vulnerable to major failures and overflows due to rising seas, more intense coastal storms, and increasingly heavy precipitation events. In March 2012, Climate Central’s comprehensive analysis of sea level rise, Surging Seas, reported that for more than two-thirds of the U.S. coastal locations analyzed, global warming has more than doubled the odds of a one in hundred year storm surge occurring within the next year.

Even with aggressive efforts to curb emissions of greenhouse gases, the earth will continue to warm for many decades and most experts expect that seas will rise several feet by the end of the century. Without those actions, seas could rise much higher.

Climate change that is already underway will lead to higher seas and more storms that can overwhelm coastal sewage treatment systems, resulting in massive overflows of partially or untreated sewage into waters surrounding many of our largest and most important coastal cities; water that millions of people rely on for food, health and recreation.

Sandy Sewage Overflows By State
Click on any column header to sort by that column.