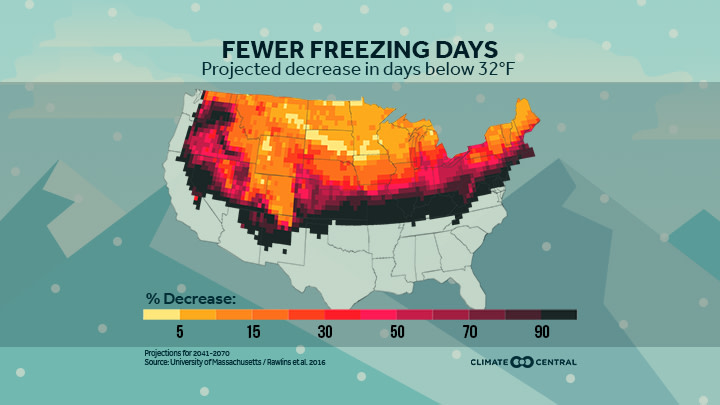 Warmer winters may sound great at first — fewer icy roads, less scraping your car — but milder weather has some major downsides. Everything from agriculture to wildlife to human health can be seriously impacted. Warmer winters also pose serious economic consequences in many states reliant on revenue from winter sports and recreation.

The number of days below 32°F in the U.S. has been declining. As the map above — adapted from a 2016 Journal of Climate paper — demonstrates, this trend is projected to continue, threatening many of the winter activities that rely on cold conditions, including skiing, snowmobiling, ice fishing, and outdoor ice hockey.

These winter recreational activities are an integral part of the economy in many states. Data from 2009-10 show that the ski, snowboard, and snowmobiling industries were directly and indirectly responsible for employing 211,900 people and adding an estimated $12.2 billion in economic value to the U.S. economy. As winter loses its chill, these winter tourism activities will be impacted and with them, people’s livelihoods.

Here are some other notable facts we found while researching this Climate Matters:

For some winter activities, you need more than simply temperatures below freezing — you need snow. A Climate Central report found that at least 58% of more than 2,000 weather stations reported a trend toward a smaller percentage of all winter precipitation falling as snow instead of rain, with the Northwest and Upper Midwest registering the largest decreases (find the Climate Matters here). While snowmaking allows some downhill ski areas to compensate for decreasing snow totals, sports such as cross-country skiing and snowmobiling are incredibly vulnerable to these trends since artificial snow is not used for these open courses.