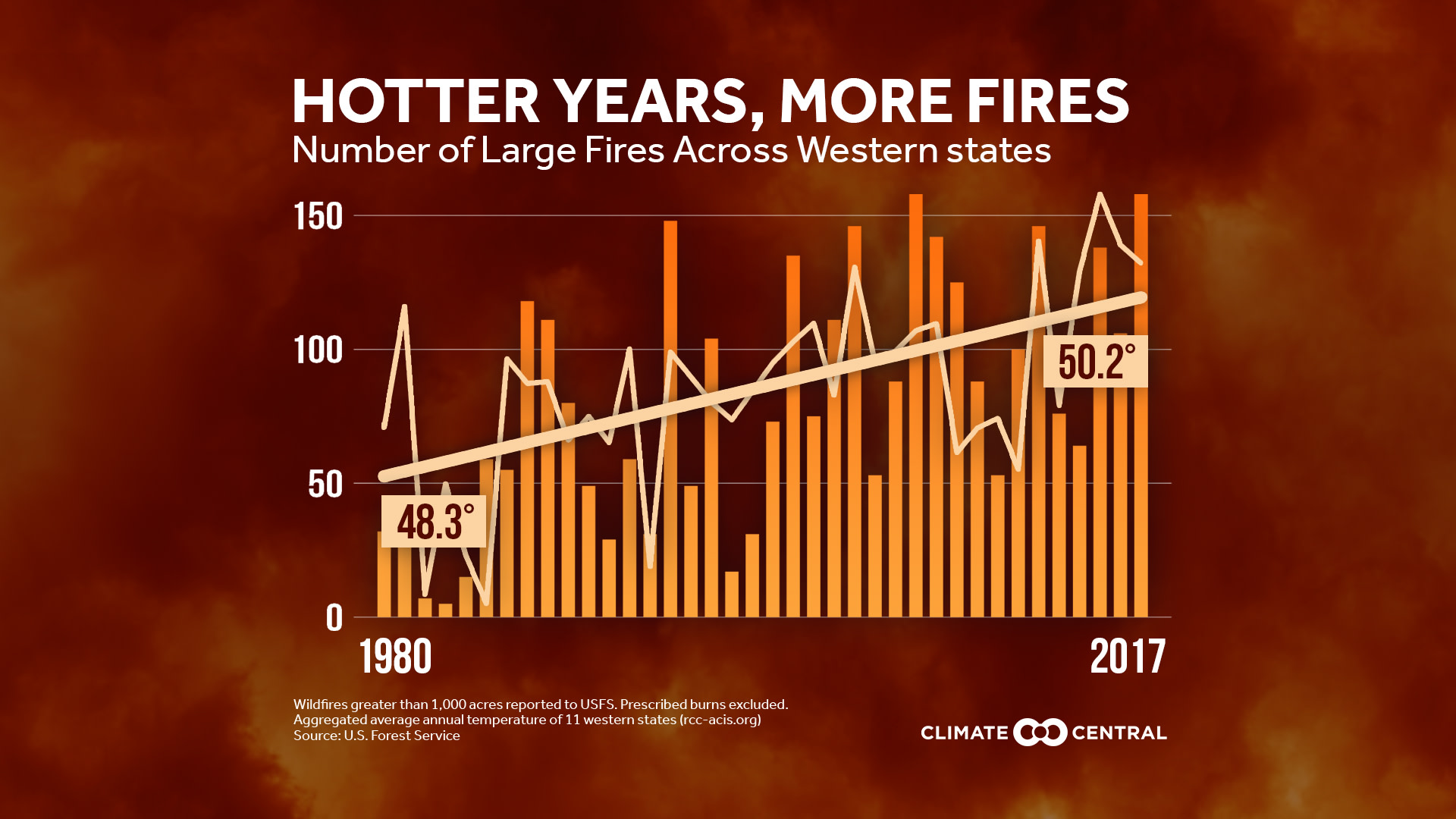 As we approach meteorological summer, which is the dry season in the West, risk will grow for another extreme related to climate change — wildfires. While these blazes can happen anywhere in the country, many occur in the 11 western states across the Mountain and Pacific time zones. Western wildfires killed 160 people and cost more than $40 billion in the past two years alone. Across the West, there have been more large fires, burning more acres — particularly in warmer years.

All 11 states analyzed recorded an increase in the number of large wildfires, according to data reported to the U.S. Forest Service from 1980-2017. California and Idaho experienced seasons with the most large fires, defined as burning more than 1000 acres. In two separate years, California has endured more than 50 large fires. And across the West, more than 2 million acres burned in large fires during 2002 and 2012.

Though many factors contribute to wildfire development, rising temperatures are increasing the risk and compounding the danger. According to a 2016 PNAS study, human-caused climate change has had a role in doubling the cumulative forest fire area burned since 1984. Temperature correlates well with large western wildfires — the eight years on record with the most fires have all been warmer than average. Forests are more vulnerable during droughts, but even a wet winter may not relieve fire risks. The moisture can spur the growth of grasses and shrubs, which dry out on warmer days and add to the available fuel. So this year’s wildfires could still be destructive, despite the record-wet winter with above-average Western snowpack.

Impacts can extend beyond the burned area; wildfire smoke is so intense that it undermines decades of progress on air quality on those smoky days. By increasing the concentration of airborne particulate matter, wildfires can heighten the risk of lung disease, heart disease, and diabetes. In San Francisco after the Camp Fire, particulate concentrations were 60 times the safe level, prompting school closures. And when smoke pollution travels eastward with the prevailing winds, it even leads to casualties. Prescribed burns (when suitable) can lessen these out-of-control blazes — our research brief below has more.

Today, Climate Central published a research brief and data downloads about a key part of U.S. wildfire management: prescribed burns. The data show that many states are struggling to use prescribed burns to reduce the fuel for out-of-control blazes, and that federal funding for prescribed burns is dwarfed by the funding for fire suppression. For the research and data package — including a new peer-reviewed study by the University of Idaho’s Crystal Kolden — click here.