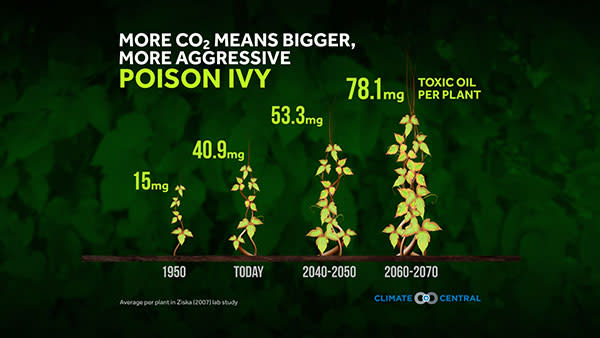 More than 100 plant species can cause skin irritation, but among the most well known is poison ivy. With our greenhouse gas emissions climbing and the atmospheric concentration of CO2 building, we expect poison ivy to thrive. A 2007 study by Lewis Ziska, a plant physiologist at the U.S. Department of Agriculture, supports this concept.

His study exposed poison ivy plants to four different concentrations of CO2 (300, 400, 500, and 600 ppm). The lowest two levels correspond to observations from the 1950s and the present. The highest two levels mirror projections for the years 2050 and 2090 from the 2007 AR4 IPCC report. In this analysis, we updated those projection dates based on the 2013 AR5 IPCC report, which are reflected in the accompanying graphic.

The experiment found that as CO2 concentration increased, there were dramatic surges in the size of the poison ivy leaves and the amount of urushiol they produced. Urushiol is the toxic, oily compound that causes skin rashes and blisters after exposure, and it is present in each part of the plant.

The jump in the urushiol was more dramatic, increasing 173% from the 1950s to the present. But while the growth in leaf size began to slow as CO2 concentration increased beyond current levels, the amount of urushiol nearly doubled between the current concentration of 400 ppm and the projected concentration of 600 ppm. According to the 2013 IPCC report, at current emission rates, that concentration will be reached between 2060 and 2070.

So, it would appear the makers of calamine lotion will be in business for a long time.