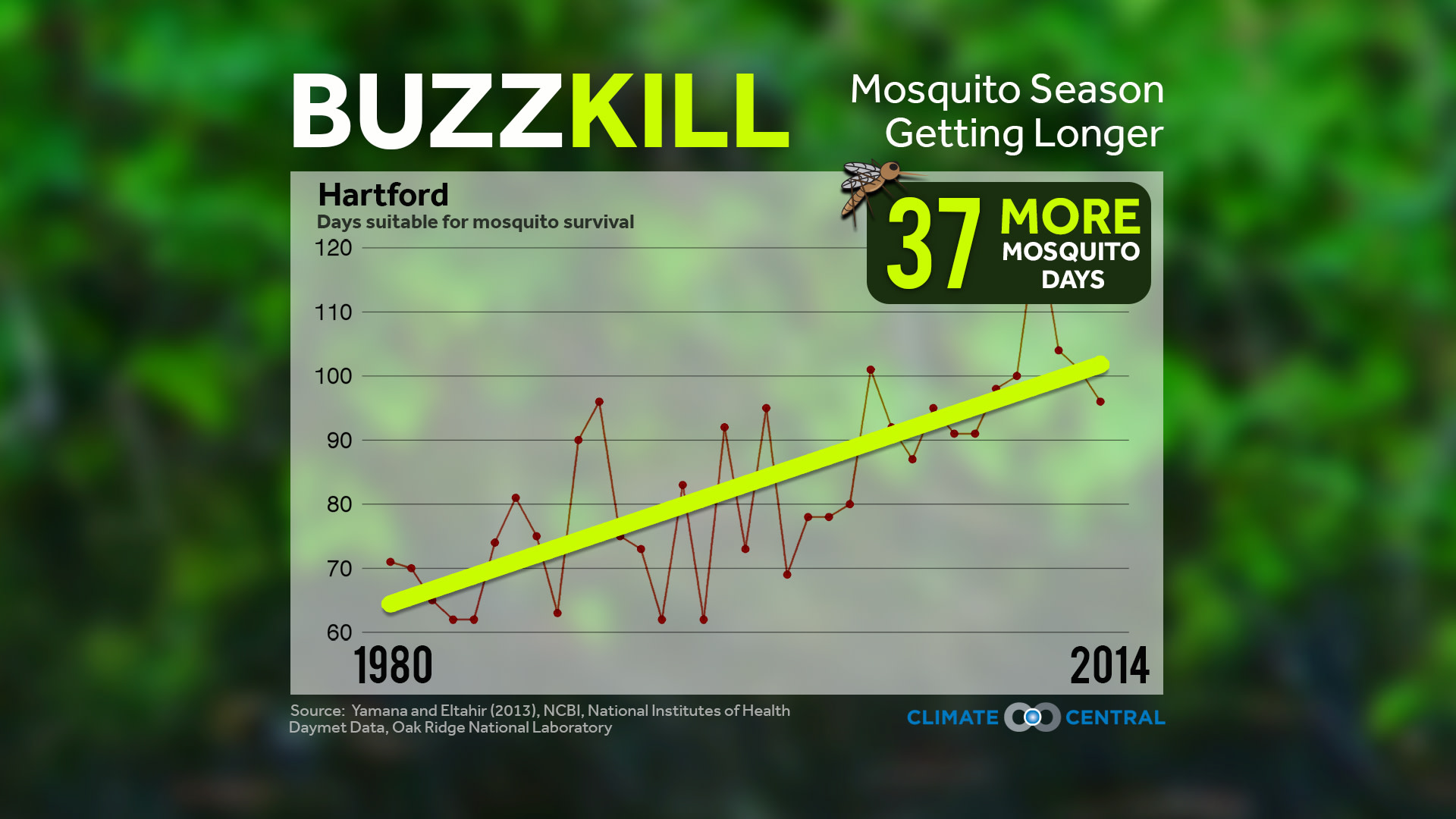 Since the 1970s, temperatures across the U.S. have been rising, due in part to rising global greenhouse gas emissions. In addition, much of the country has seen an increase in humidity. Together, these warmer, more humid environments are increasing the amount of mosquito friendly habitats. These insects have a high mortality rate at temperatures outside the range of 50 to 95°F or at relative humidity below 42%. So while a few parts of the country are becoming too hot to be favorable for mosquito habitats, for most of the U.S., the number of days with suitable conditions has risen. To understand future increases, the National Climate Assessment studied the Asian Tiger Mosquito, which can transmit West Nile and other diseases. For the Northeast, their projections suggest that the current 5% of suitable land for these mosquitoes will rise to 16% by 2035, possibly 49% by 2100.

Expansion of mosquito populations are a concern for health as well as comfort. With conditions becoming more conducive for mosquitoes, the chance of disease transmission goes up. After an unseasonably warm late spring, summer, and early winter in 2012, the U.S. experienced a West Nile Virus outbreak from the Asian Tiger Mosquito, resulting in the infection of over 5,600 people. The CDC suggests that this outbreak was connected to those higher temperatures, which may have led to larger mosquito populations. West Nile is only one of several mosquito-borne diseases that present an increasing threat to the U.S.; others include dengue fever and chikungunya.

And while many people think of malaria as a disease that doesn’t affect the U.S., travelers that have been infected abroad can pass the virus to local mosquitoes if bitten. In reality, malaria is not that distant. This month, the CDC has received multiple reports of malaria among U.S. travelers returning from the Dominican Republic, and Puerto Rican authorities have confirmed 14 cases of malaria, all from people returning from the Dominican Republic.

Ticks also present an increasing threat to public health. In addition to the increase in deer populations and land use changes that have given ticks a boost, climate change has also impacted the size and geographical distribution of tick populations. Research by Brownstein et al. suggests some retraction in habitat suitability for ticks, particularly in the Southeast. However, they predict a net 68.9% increase in suitable tick habitats in North America by the 2080s.

Lyme disease, a tick-borne illness, has increased substantially, likely driven by growing deer populations. Between 1991 and 2013, the incidence of Lyme disease doubled, particularly affecting the Northeast. Furthermore, the CDC suggests that the actual number of cases is significantly higher than those being reported. The trend is expected to continue as the climate continues to change. Scientists anticipate that warming winters will contribute to this increase, as habitats become more conducive for ticks. While climate change may make some of the hottest areas of the country unsuitable for vector species, for the most part, conditions are becoming increasingly favorable for these pests.