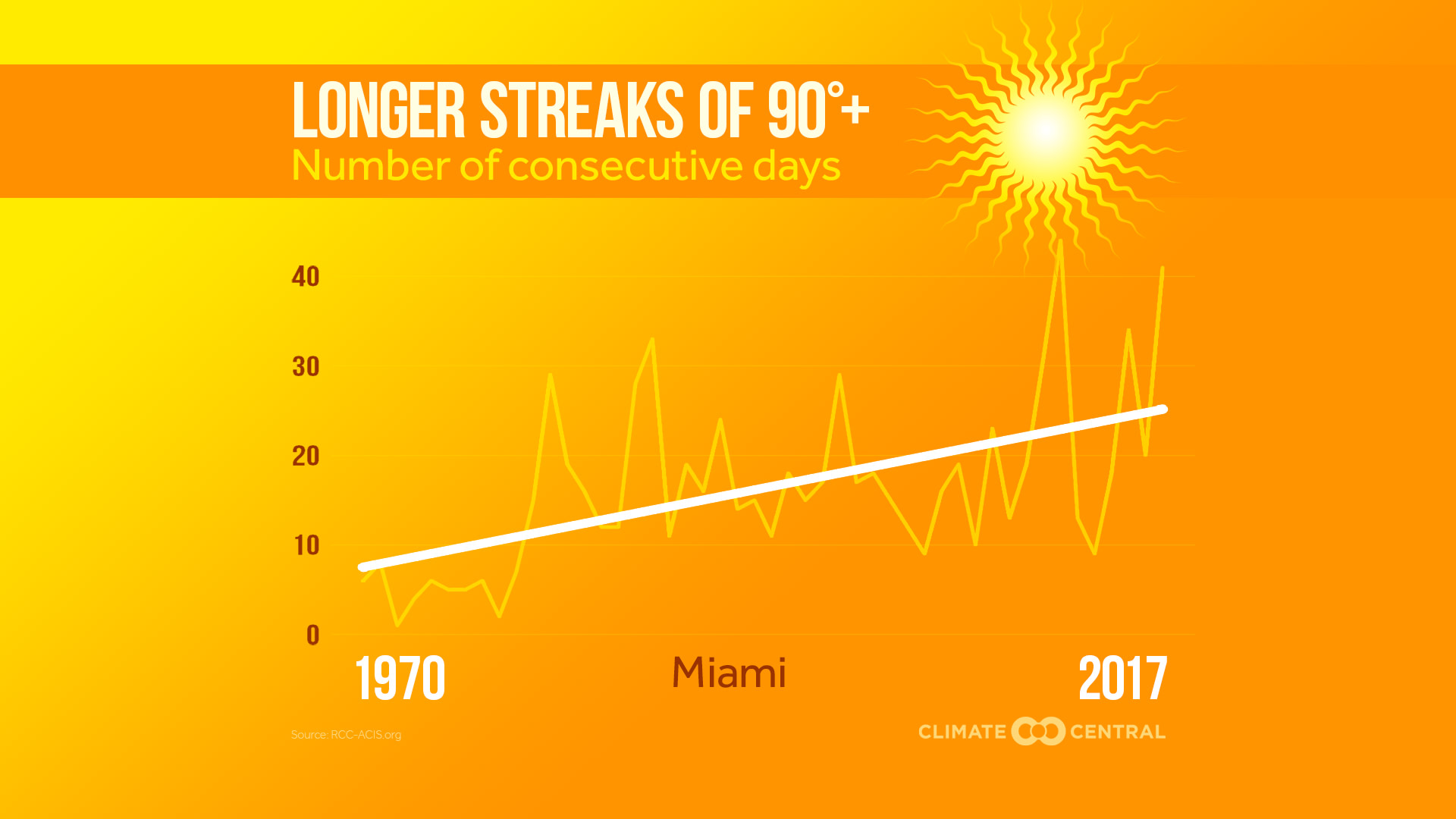 The summer doldrums have set in for much of the U.S., but an end to the Dog Days of summer is within sight. The Dog Days traditionally extend from July 3 to August 11, when Sirius (aka the Dog Star) rises and sets with the sun. Ancient cultures believed that additional energy from Sirius helped make the summer days hotter, but in modern times, the addition of greenhouse gases in the atmosphere is giving summer temperatures a boost. To complement last week’s analysis examining the number of very hot days a year, we examined the consecutive number of very hot days each year. Since the term heat wave has a different meaning in different climates, we refer to these as heat streaks.

Not surprisingly, the analysis yields a similar theme as our extremely hot days analysis, with 75 percent of the 244 cities analyzed having longer heat streaks than a half-century ago. The length of these heat streaks has increased the most in Texas cities, with the longest streaks above 95°F in Houston and San Antonio each averaging more than 10 days longer. Several Southeastern cities are not far behind. Shreveport, Louisiana and Huntsville, Alabama each have heat streaks above 95°F averaging a week longer.

The extended streaks of heat have huge impacts on sports camps and activities. The 16-team Little League World Series (LLWS) starts August 16 in Williamsport, Pennsylvania, and ends August 26. Since the first LLWS in 1947, the average summer temperature in Williamsport has risen 1.5°F, and this climb in average summer temperature can give rise to a larger increase in extreme heat. To combat heat-related illnesses to the players, hydration and frequent breaks are vital, as the body has to work harder to cool itself when exercising in the higher temperatures of summer.

Football season is also just around the corner and practice for the fall sport gets started in the August heat. Football can be more demanding on the body than baseball, so the heat has a greater impact — the body produces 15 to 20 times more heat when exercising than when it is at rest. The higher summer humidity compounds the struggle for the body to cool itself, as relative humidity over 60 percent reduces the body’s ability to cool through sweating.

If dehydration sets in, the body cannot produce sweat to cool itself, which is another step toward heat illness. When the body’s core and brain temperatures get too high, blood flow and muscle strength both decrease, setting the stage for heat-related illnesses like heat stroke.

METHODOLOGY: Data was gathered from the Applied Climate Information System. To determine the threshold temperature for each city, we used the highest daily temperature (at 5°F intervals) with an average of at least one 5-day streak at that value per year during the analysis period. The Little League World Series analysis is the average summer (June, July, August) temperature each year in Williamsport since the first tournament was played. Heat and health statistics are from the National Federation of State High School Associations.