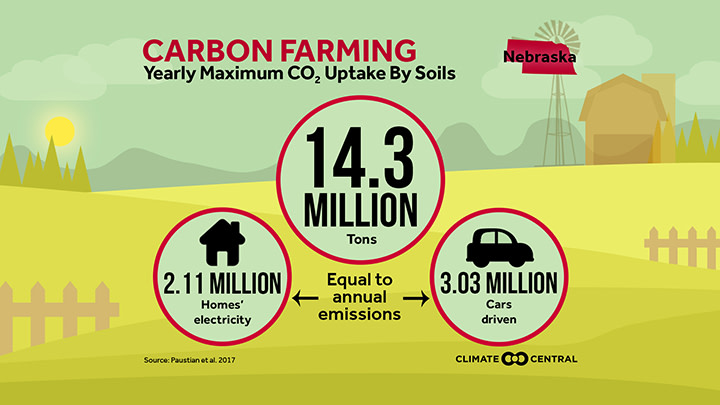 This is National Farmers Market week, a reminder of how farmers markets connect people with their local agricultural communities. More than 60% of vendors travel less than 20 miles to the markets where they sell their produce. That reduces the transportation carbon footprint of food in a small but meaningful way.

Moreover, local farms tend to use methods that generally have a smaller environmental footprint than larger operations, which one study indicates accounts for the vast majority of emissions from food production. A 2015 survey found that 3 out of every 4 farmers at local markets use practices consistent with organic standards and 81% incorporate healthy soil practices, such as cover cropping, reduced tilling, and compost application.

These and other soil management practices convert carbon dioxide from the atmosphere into carbon stored in the soil, as highlighted in a study by soil experts from Colorado State and other universities. If these practices were widely applied, they could store the equivalent of an additional 200 million tons of carbon dioxide per year in U.S. soils. That’s the equivalent of taking nearly 42 million passenger cars off the road. This extra carbon in the soil has the additional benefit of making it more fertile.

Our graphics this week show the amount of carbon dioxide that could be stored each year if these practices become widespread in each of the Lower 48 states. To put those numbers in context, we’ve compared the amount of carbon that could be stored to the emissions released by generating electricity for an average home or driving an average car each year.

METHODOLOGY: Agricultural practices and associated carbon storage potentials are described by Paustian et al. (2017). The state totals shown in the graphics have been aggregated from county-level estimates. Carbon storage estimates for individual farms using different land management practices can be calculated from COMET-Farm and COMET-Planner tools developed at Colorado State University in collaboration with the USDA’s Natural Resources Conservations Service. Comparisons of the number of cars per year and the number of homes’ electricity use per year to the amount of CO2 sequestered were calculated according to the EPA’s method, available at EPA Greenhouse Gas Equivalencies Calculator.