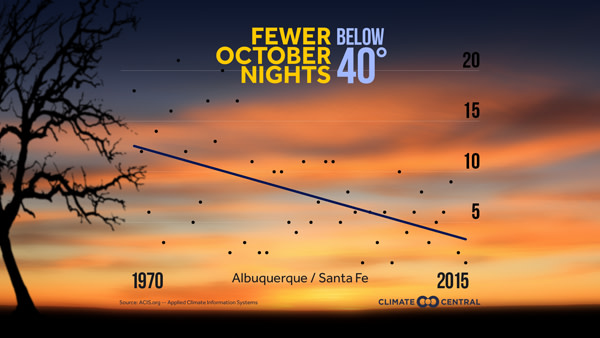 Meteorological fall begins in September, but the season really comes into its own in October. The leaves begin to change, the days get shorter and football season kicks into high gear. And after a long hiatus, sweaters and jackets return to wardrobes as the cooler nights become more common. But as the planet warms from the increase in greenhouse gases, the number of October nights with sweater weather is decreasing in most of the U.S.

In this week’s analysis, we examine the number of cool October nights — defined as a temperature below a characteristic threshold for your market. If you feel like the frequency of those cooler October nights is decreasing, it’s probably not your imagination.

The decrease in cool nights is one feature of an overall fall warming trend. Nationwide, fall is warming at a rate of 0.43°F per decade since 1970, with the fastest rates of warming in the Northeast and the West. Similarly, the growing season has lengthened the most in the Northeast and the West. Nationally, the growing season is already about 15 days longer than at the beginning of the 20th century.

The decrease in cool nights can also delay the start of some of the traditional cold season activities, such as snow skiing, in northern states. With the number of nights below freezing decreasing, snow may start showing up later and insects can survive later into the year.