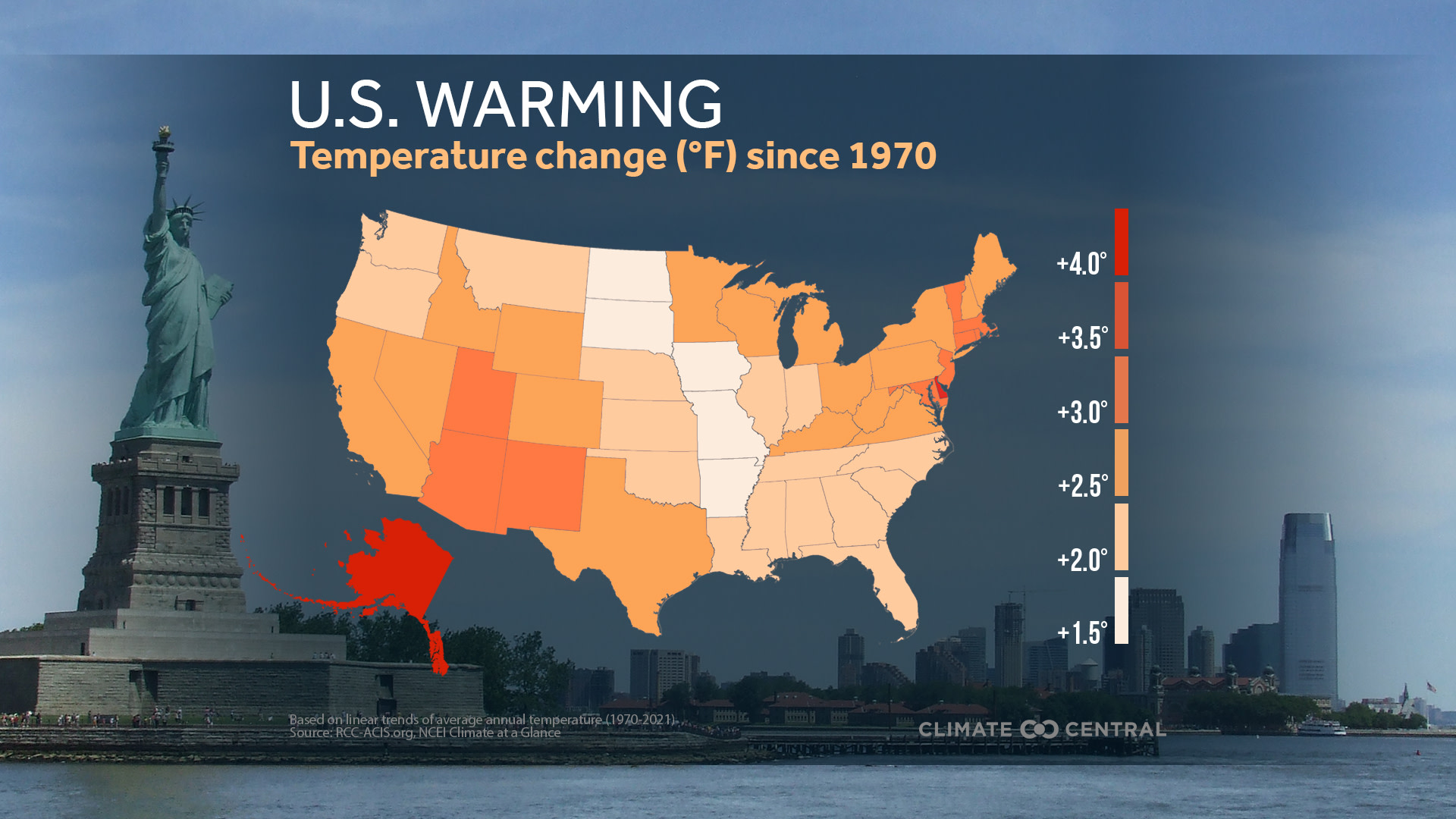 Happy Earth Day!
Since the first Earth Day 52 years ago, environmental science, policy, and public awareness have transformed in the U.S. and around the world. Earth Day is a time to celebrate this progress and take stock of current challenges—including climate change.

The concentration of heat-trapping CO2 in the atmosphere has increased nearly 30% since the first Earth Day in 1970. And when CO2 increases, temperatures follow suit. How has rising CO2 affected temperatures in the U.S.?

Widespread U.S. warming since the first Earth Day.
Climate Central analyzed trends in annual average temperature in 246 locations, all 49 states (Hawaii was excluded; see methodology), and the entire nation since 1970 and found that:

The fastest-warming U.S. cities and states based on the increase in annual average temperature since 1970 were:

Curbing emissions to celebrate Earth.
Warming is one of many ways that continued emissions of heat-trapping gasses like CO2 impact our planet, our communities, and our food and water supplies.

Recent IPCC reports review the escalating impacts of climate change on people and nature, and assess ways to limit global warming and minimize further harm to people and the planet.

These scientific reports make clear that staying within the globally-agreed warming limit of 3.6 °F (2 °C) will be an immense challenge—but that the benefits of limiting warming would likely outweigh the costs of mitigation. These reports also make clear that climate solutions already exist for every major economic sector—including energy, transportation and agriculture.

Where can I learn more about climate solutions?
Search the Climate Matters Media Library for ‘Solutions,’ which includes research reports and local graphics on renewable energy, sustainable infrastructure, electric vehicles, and more. The most recent report from the United Nations Intergovernmental Panel on Climate Change assesses climate change mitigation pathways in detail, along with reporting resources.

The SciLine service, 500 Women Scientists or the press offices of local universities may be able to connect you with local scientists who have expertise on warming and environmental policy. The American Association of State Climatologists is a professional scientific organization composed of all state climatologists.

Local analyses used 1970-2021 data from the Applied Climate Information System. State and U.S. temperature data were obtained from NOAA/NCEI’s Climate at a Glance. A state trend for Hawaii was not calculated because it is not included in the NOAA/NCEI dataset. Trends are based on a mathematical linear trend line, beginning in 1970 for consistency between all 247 stations.However, for data summaries based on linear trends, only 246 stations are included due to large data gaps in Wheeling, W. Va.