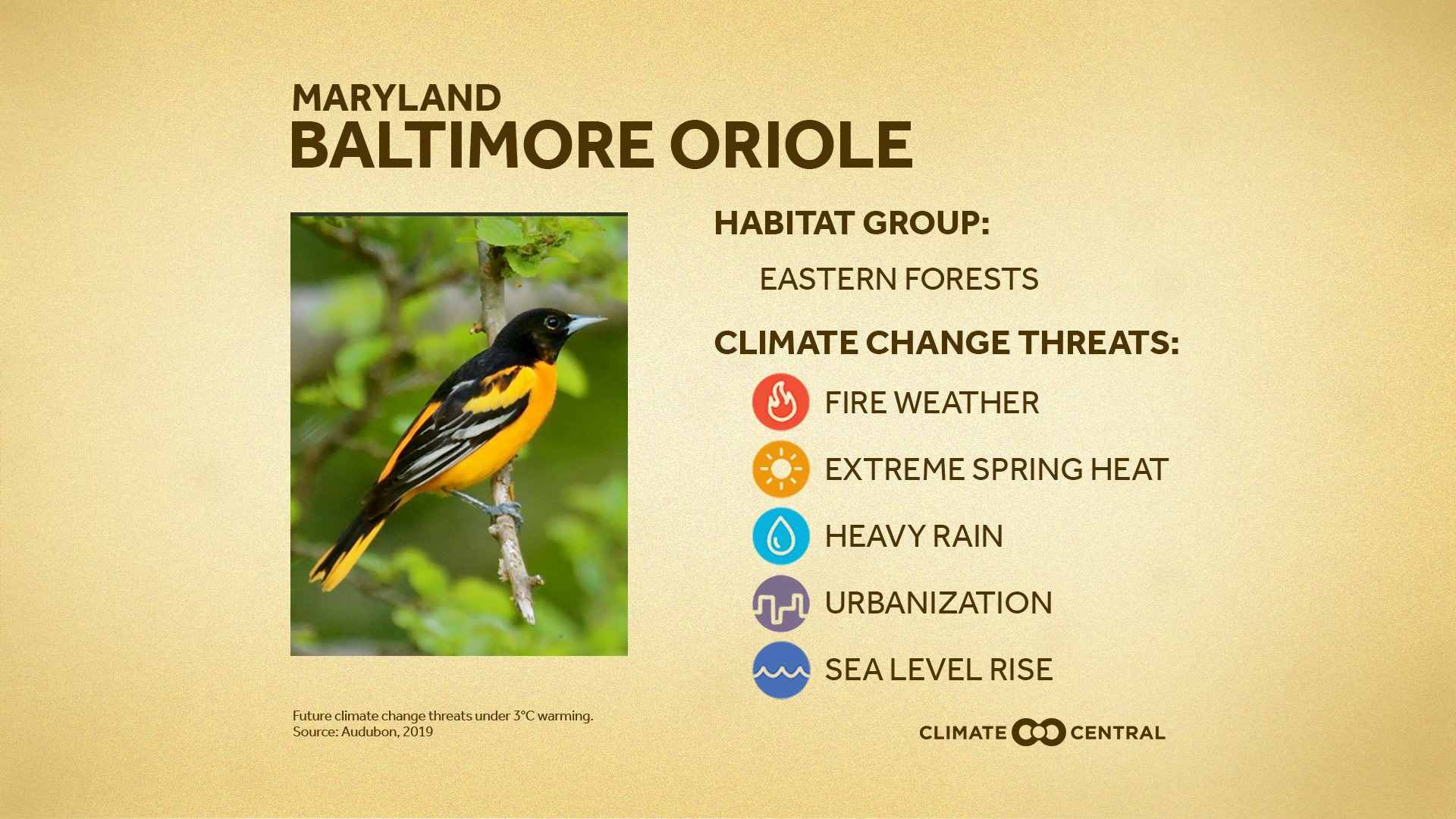 Birds as a group are particularly sensitive to climate change and have been known to adapt to habitat threats by shifting their locations. But climate change is happening faster than at any other time in evolutionary history, and much of U.S. land is developed or agricultural, not hospitable for wildlife.

Audubon’s extensive research serves an important reminder that climate change is not only affecting rare or endangered bird species, but is affecting the iconic and familiar birds that represent our states and often appear in our own backyards and neighborhood parks. Audubon’s scientists studied the risks to 544 North American birds from climate change threats, including sea level rise, Great Lakes water level change, land development, and extreme weather events. Using this dataset, the team at Climate Central examined how state birds fared across 47 states and the District of Columbia (Delaware’s Blue Hen, Hawaii’s Nene, and Rhode Island’s Red Hen were not included in the analysis). Here’s what they found:

Heat waves can directly affect birds, killing baby birds and causing heat stress to adult birds, but can also affect reproduction, timing of breeding, and migration patterns. Similarly, droughts can lead to lower reproduction and survival rates. Heavy rain can dislodge nests and flood burrows, killing baby birds or leaving them vulnerable to predators. Sea level rise is likely to inundate sites that shore-nesting birds use to reproduce and can negatively impact wetlands and marshes that act as nurseries for wading birds and waterfowl. And while any single one of these threats can impact bird population, their combined influence could dramatically alter populations and their ecosystem biodiversity.

Those species that rely on more specific food sources or habitats face the greatest threats. For example, birds who thrive in boreal forests are among the most vulnerable, as these ecosystems are imperiled by warming temperatures. Perhaps not surprisingly, birds with more flexible diets and who have adapted to urbanization fare better. Many of these birds already visit our backyards and urban neighborhoods.

While most of the country is practicing social distancing and has limited access to state parks or wildlife areas, it’s a great time to connect with our local avian neighbors. There are plenty of online tools to learn about the birds right out your window and how to identify them.

Every February, thousands of people worldwide participate in the Great Backyard Bird Count, identifying and counting birds in their backyards and reporting them to birdcount.org. In 2019, more than 160,000 participants submitted their bird observations, creating the largest instantaneous snapshot of global bird populations ever recorded. Enter your zip code and get a checklist of the birds you could potentially see in your neighborhood, based on those submissions from citizen scientists.

Check out these online birding tools and guides:

Audubon’s Guide to North American Birds allows you to search for birds and learn about them, including what they eat, where they nest, where they migrate, and their climate vulnerability. Their “Joy of Birds” page has a number of articles on how to bird while social distancing at home.

The Cornell Lab of Ornithology’sAll About Birds website provides identification assistance. Its Birding Academy has online courses, including the new Joy of Birdwatching for beginner birders. There are also lectures and kids’ video games to help train your eyes and ears. Extra bonus: a series of activities called Science and Nature for Cooped Up Kids.

You can download Cornell’s Merlin app to your phone, which asks you questions to help identify what bird you’re seeing or hearing, or their eBird app to keep track of your bird lists. The eBird app is now the world’s largest biodiversity-related citizen science project, with more than 100 million bird sightings submitted annually. The eBird website has charts, graphics, tools, and identification quizzes. Audubon also has a free birding app for your phone.

And if you don’t mind looking (or sounding) a bit crazy, you can learn to call birds to you by making sounds called “pishing.”

Check out species that may not be local to you through bird cams. Cornell,Audubon and other local wildlife groups across the country set up cameras on nests, feeders, and other sites so that you can watch birds lay eggs and feed their young up close without bothering them. You can find Barred Owls in Indiana, Ospreys in Georgia, Sandhill Cranes in Nebraska, and American Kestrels in Wisconsin. Most websites also have “highlight reels,” of the more exciting moments, like when this kestrel chick fledged from the nest.

You can find ways to make your neighborhood and homes more attractive to birds, including planting native species, designing and retrofitting buildings, and simply turning off unnecessary lights at night to protect birds migrating over brightly lit cities.

Finally, many bird species migrate in April and May. Cornell’s BirdCast website forecasts which bird species might be passing through particular areas and whether it will be a big migration night, as detected by the U.S. weather radar network.

Search for local bird experts through Audubon’s 23 state programs, 41 centers, and 450+ local chapters around the country or find local birding clubs at the American Birding Association.

The SciLine service,500 Women Scientists or the press offices of local universities may be able to connect you with local scientists who have expertise on changing climate patterns in your area. The American Association of State Climatologists is a professional scientific organization composed of all 50 state climatologists.

Data for the state birds of 47 states and the District of Columbia were obtained from the National Audubon Society. The state birds of Delaware, Hawaii, and Rhode Island were not included in the Audubon’s study. Climate threats in both the summer and winter under a 3.0°C (5.4°F) warming scenario (relative to pre-industrial levels) were included in the analysis.