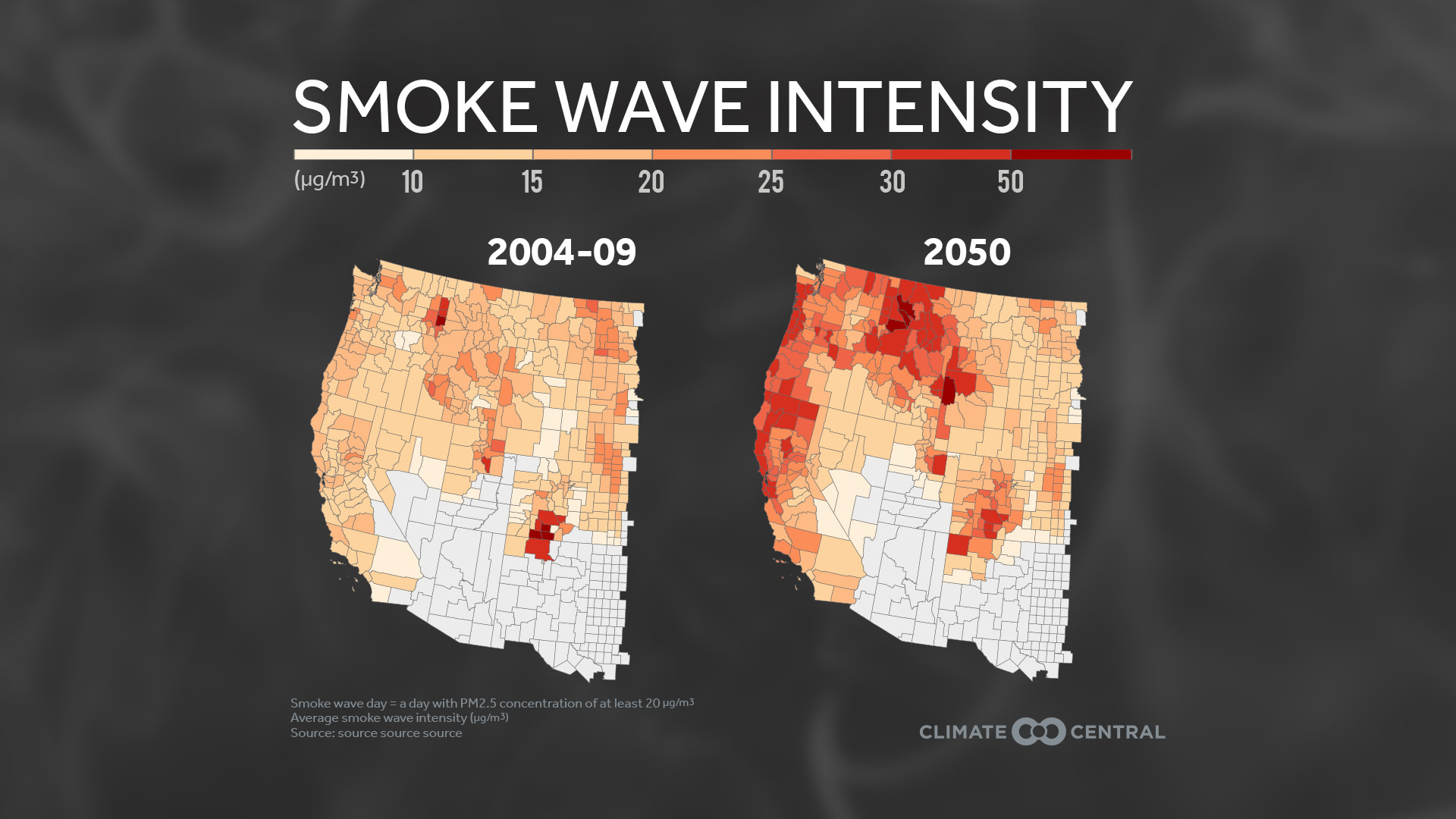 Driven by warming temperatures and other issues, like forest management decisions and urban growth, Western wildfire seasons are starting earlier and burning with greater intensity on average. Rising temperatures are contributing to droughts and causing snowpacks to melt earlier, compounding wildfire threats. With the fiercening of flames has come a blotting of the skies—smoke waves have been smothering communities from quiet foothill towns to major metropolitan centers, forcing cancellations of local events, driving vulnerable residents indoors and exacerbating existing health risks. The rise in smoke levels during warmer months is undermining improvements in air quality driven by the regulations on pollution from fossil fuel use and other sources.

Scientists project the intensification of smoke waves to continue as temperatures continue to increase due to heat-trapping pollution. Forests and grasslands dry out as temperatures increase, fueling larger and more frequent blazes.

Forest management practices also influence wildfire seasons. The use of prescribed burns are one of the tools available to land managers, in which crews ignite and manage low-intensity fires on forest floors to reduce fuel, but they are used inconsistently nationwide.

Wildfires can affect ozone pollution levels and release broad arrays of dangerous chemicals into the atmosphere, but it’s the tiniest of the particles that usually cause the biggest threats—PM2.5, which refers to particles or droplets in the air that are two and a half microns or less in width. These particles can lodge deep in the lungs and even enter the bloodstream, increasing risks of heart attack, diabetes and many other ailments.

Lung health is important for surviving COVID. Exposure to particulate matter from wildfire smoke could increase risks of death from coronavirus. So, too, does the use of tear gas by police forces during demonstrations. Research involving soldiers exposed to high concentrations of tear gas during combat training concluded that exposure increased risks of developing acute respiratory infections, with risks greatest at the highest concentrations.

Exposure to pollution from tailpipes, refineries and other industrial sources has been shown to increase deaths from COVID. That puts Americans who live with polluted air, many of them low-income and people of color with limited access to healthcare, at greater risks of dying from the disease.

Wildfire smoke can trigger and exacerbate a long list of health problems including asthma attacks, headaches and runny noses. And health impacts can linger long after smoke from a fire has cleared. Research from University of Montana scientists showed how particulate matter from wildfires increased the risk of influenza months later.

For Climate Central’s coverage of how wildfire smoke and tear gas could affect COVID suffering this year, read and listen to our partnership story with KQED.

How are local government and communities preparing for wildfire season?

The COVID-19 pandemic is presenting novel challenges for wildfire preparations and responses this summer. Watch an online workshop put together by Climate Central and the International Association of Emergency Managers (IAEM) to prepare journalists and meteorologists for reporting on local emergency planning efforts during wildfires. You can find out about your state’s plans for wildfire preparation by contacting your local Emergency Management Agencies.

Local firefighting agencies can describe how they are shifting tactics this year to protect firefighters from COVID spread. The National Interagency Fire Center has overseen the drafting of plans for nine geographic regions to help guide effective wildfire responses during the pandemic.

Residents with asthma and other lung conditions may be willing to share their concerns about COVID and wildfire smoke—and how they plan to protect themselves. Nurses can be helpful sources for gauging the wellbeing of a community.

Everything you need to know about wildfire season

A smoke wave refers to at least two consecutive days of wildfire-specific PM2.5 at a concentration of at least 20 micrograms per cubic meter. Changes in average western smoke wave intensity from the recent past (2004-2009) to the future (2050) were obtained from Liu et al. (2016) using CMIP3 models.