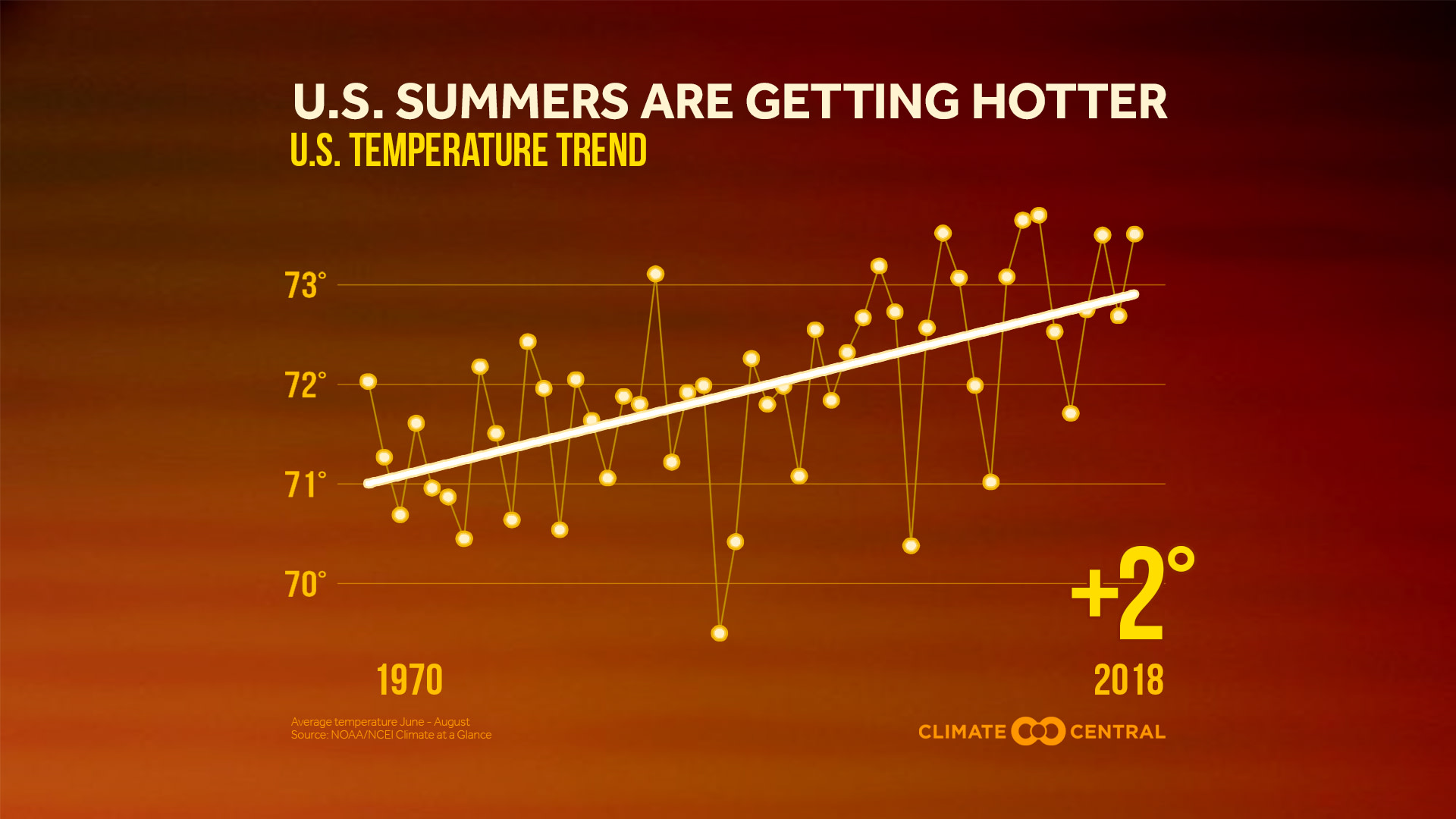 We kick off meteorological summer with the first of two releases on warming summers, which are affecting health, farming, water resources, recreation, and energy costs.

Happy meteorological summer! While many view summer as the season of vacations and outdoor activities, it is also the season of extreme heat. Those extremes can get much more frequent with a seemingly small increase in average temperatures — an increase that is already happening with climate change. Climate Matters is devoting the next two weeks to summer temperature data: average temperature trends followed by the number of days above normal. In both cases, warming summers are endangering health, stressing agriculture, and raising energy costs.

As temperatures rise, summer’s heat is kicking in earlier and lasting longer, with more extremely hot days and longer heat streaks. In the past half-century, summer temperatures have risen 2.0°F on average in the contiguous U.S. Among the 244 cities analyzed, nearly 95% have recorded an increase in average summer temperatures since 1970. The eight largest increases have occurred in Texas and the West, led by Boise, Idaho (5.3°F); Las Vegas, Nevada (5.3°F; and McAllen, Texas (5.1°F).

The more intense heat is threatening health and recreational revenue, while increasing cooling costs indoors. In the western areas with the steepest temperature rises, additional evaporation can intensify droughts that jeopardize crop yields. Droughts and water deficits are projected to be the most severe impacts of climate change for much of the West. Warming itself heightens the risk of heat exhaustion, especially for outdoor workers and athletes — exercising produces 15 to 20 times more body heat than resting does. And when we escape indoors, we can’t escape the rising costs of air conditioning (also a source of warming greenhouse gases). A 2018 Climate Central report found that 93% of cities analyzed are experiencing more cooling degree days, leading to higher cooling costs.

All of these impacts link back to warming temperatures — a trend that continues as human-caused greenhouse gas emissions blanket the atmosphere. Reducing such emissions will limit these impacts, making our summers more bearable in the future.

Methodology: National trends use NOAA/NCEI average temperature data for meteorological summer in the contiguous U.S. (CONUS), defined as June through August. Individual city temperature trends use data from the Applied Climate Information System. Displayed trend lines are based on a mathematical linear regression. A start date of 1970 was chosen since it is the earliest year with reliable data for all 244 cities analyzed. If you would like to see an earlier start date for your market, let us know.