Wind Helped Keep Lights On in Texas During Cold Snap

Wind power is getting some credit for keeping the lights on in Texas as fossil fuel-fired power plants were nearly maxed out during the coldest days of the winter so far.

Texas, like much of the rest of the South, saw snow, ice and the bitter polar vortex-driven chill in January and February, prompting people to crank up the heat, stressing the state’s power grid nearly to the point of requiring rolling blackouts. 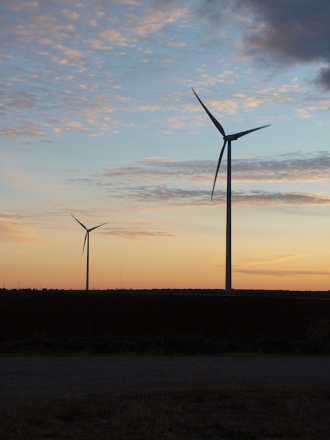 In a changing climate, wind power is seen as part of the solution to weaning the country away from greenhouse gas-emitting fossil fuels. Wind power may even begin to compete on its own directly with natural gas as a major source of electric power by 2025, National Renewable Energy Laboratory research shows.

But today, as wind mainly supplements fossil fuels for electric power generation, it could help stabilize the power grid when other electric generators are down or maxed, particularly in Texas.

The state has its own self-contained power grid and, with more than 12,000 megawatts of wind power-generating capacity, is the leader in wind power nationwide. In 2013, wind provided about 10 percent of the electricity on Texas' power grid, according to data from the state's grid operator, the Electric Reliability Council of Texas, or ERCOT.

Winter is a tough time in Texas for electricity demand to spike because utilities often take traditional power plants offline for maintenance when it's cool enough for residents to keep their air conditioners off but not so cold they have to blast the heat, said Greg Wortham, executive director of the the Texas Wind Energy Clearinghouse based in Sweetwater, Texas.

But the region isn't accustomed to periods of sub-freezing weather, especially in south Texas.

“Wind, along with other power sources, kept the lights on,” Wortham said.

That was the case most recently on the chilly morning of Feb. 6, when peak electricity demand in Texas came close to breaking its all-time record. Statewide demand exceeded 57,256 megawatts, ERCOT spokeswoman Robbie Searcy said. That’s just shy of the state's wintertime record set just a month earlier at 57,277 megawatts. One megawatt of wind power can provide electricity for roughly 300 homes.

On Feb. 6, ERCOT asked customers to cut their electricity use so they could avoid overloading the state’s power plants. 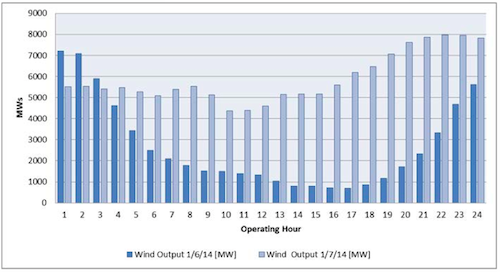 An ERCOT graph showing wind farm electricity output being fed into the Texas power grid during the cold snap of Jan. 6 and 7. ERCOT declared an energy emergency alert on Jan. 6 when wind farm output was low, but when the wind picked up on Jan. 7, it provided power to help prevent rolling power outages in Texas when traditional power plants were nearly overloaded in the cold weather.
Credit: Electric Reliability Council of Texas

“At about 6:35 that morning, we lost about 900 megawatts, then we lost another 214 megawatts,” Searcy said. She declined to say which power stations shut down that morning, what kind of stations they were or why they went offline, citing a 60-day period during which ERCOT declines to publicly discuss specifics of shutdowns.

There were less than 2,000 megawatts of wind power being generated in Texas around 7 a.m. on Jan. 6, but the next day when the state's electricity demand spiked again, the wind was blowing hard through West Texas turbines to generate enough power to handle roughly 10 percent of ERCOT’s load that morning, ERCOT data show.

“It appears that we would have had sufficient generation available to get through the morning peak on Jan. 7 without incident,” Searcy said in an email conversation. “However, wind generation played an important role on the grid, providing more than 5,000 MW of generation during the morning peak on Jan. 7. In general, that's about 4,000 MW more wind power than the previous day's peak hour, when we did issue an energy emergency alert but did not have to initiate rotating outages.”

Wortham said the close-call with power outages during Texas’ brushes with the bitter cold shows the value in having wind power integrated into the grid with other sources of electric power — natural gas, coal and nuclear.

“Everything’s got a value,” he said. “The wind itself wouldn’t have kept the lights on.”