Fracking for crude oil is big business in North Dakota, but with that oil is coming a steadily increasing amount of wasted natural gas that is burned off, releasing large amounts of climate change-driving carbon dioxide into the atmosphere, according to new U.S. Energy Information Administration data.

The Bakken shale of North Dakota is one of America’s largest sources of crude oil. It's produced by drilling and then hydraulic fracturing, or fracking, shale formations deep underground. But the oil fields rarely produce only oil — natural gas and other hydrocarbons come with it. 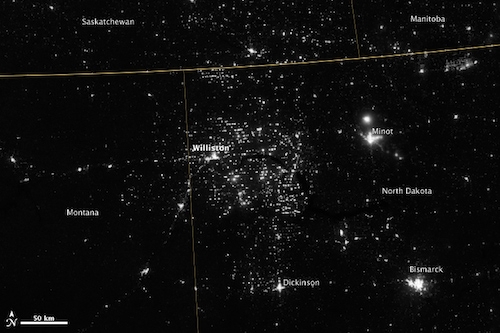 North Dakota doesn’t yet have the interstate pipelines to bring all that natural gas to market, so energy companies consider it “nonmarketable” gas that they have to either find other uses for locally or waste it by burning it off, a process called flaring.

So much flaring is occurring in the Bakken shale region — the source of the crude oil that spilled and exploded in several recent rail accidents — that the flames from the flares across the western North Dakota have been seen from space.

All the flared natural gas in North Dakota was responsible for 4.5 million metric tons of CO2 — greenhouse gases roughly the equivalent of adding 1 million cars to U.S. highways in 2012, according to estimates released last year by nonprofit sustainability group Ceres.

“Gas that is flared is not gas that they (the energy industry) are making revenue off of,” said the EIA report’s co-author Michael Ford, an industrial economist for the agency. “In that sense, you can say that it’s wasted.”

North Dakota's Bakken shale alone is responsible for 22 percent of all the natural gas flared in oil and gas fields nationwide, according to the EIA. The state has made some gains, however, in using that nonmarketed gas in other ways. Nonmarketed natural gas as a percentage of North Dakota’s total natural gas production has decreased to 33 percent in 2013 from 37 percent in 2011, the data show.

The Ceres report found that Bakken oil companies flared about $3.6 million worth of natural gas per day in May 2013, or 5 percent of the value of the oil produced in North Dakota each day that month. Ceres estimated that the value of all the natural gas flared in the state in 2012 totaled more than $72 million.

Crude oil and natural gas production in the Bakken shale has accounted for a tripling of the amount of natural gas being flared in the U.S. between 2005 and 2010, according to 2012 World Bank estimates.

“That's a heck of a lot of gas that's being flared,” Cornell University civil and environmental engineering professor Anthony Ingraffea said Friday. Ingraffea is co-author of a 2011 Cornell study showing that leaking methane emissions from natural gas production are higher than previously thought.

The flared gas does not generate electricity or heat homes and is releasing carbon dioxide into the atmosphere and venting some quantity of methane, he said.

Ingraffea said the amount of gas being flared each day is the roughly the equaivalent of one day's export from any of the smaller liquified natural gas, or LNG, export terminals currently being proposed for construction across North America, which range from 0.16 billion cubic feet of LNG per day to 3.8 billion cubic feet, according to Federal Energy Regulatory Commission data.

In other words, the amount of natural gas the U.S. proposes to export to other countries from a single proposed LNG export terminal is being burned off and wasted forever on a daily basis in North Dakota.

“That gas is our children's patrimony,” he said. “You only get to burn it once. If we talk about energy independence and security on the back of shale gas, it's decreasing what's going to be avialable for our children.”

Ingraffea said he is also concerned about the amount of natural gas that could possibly be venting into the atmosphere at Bakken production sites either intentionally or before it is burned off through flaring. Ford said venting is illegal in North Dakota, but Ingraffea said some of the methane-containing natural gas inevitably escapes anyway.

The oil and gas industry in North Dakota says it's trying to become more efficient and to bring the wasted gas to market.

North Dakota, which is aiming to reduce its percentage of nonmarketed gas to about 10 percent by 2020, is building new pipelines and other projects that will try to bring to market natural gas that would otherwise be flared. 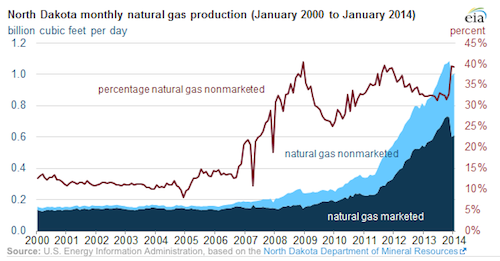 “We have to remember that the Bakken is still a very young play, and this is just one factor in why production has outpaced our ability to build the infrastructure needed,” his statement said.

A new natural gas pipeline that can carry 0.13 billion cubic feet of gas per day called the Tioga Lateral has been completed, allowing natural gas to flow to Chicago and other population centers, but won’t be fully operational until the end of this month when a processing plant connected to the pipeline is scheduled to open, according to the EIA.

Less natural gas would be flared if North Dakota could find other uses for it within the state’s borders, Ford said.

Other projects that would make use of some of otherwise nonmarketable natural gas include proposed local fertilizer plants and a pipeline expected to be completed in 2017 slated to send natural gas to Minnesota.

You May Also Like
Where are the Tornadoes? Slow Start, but no Guarantees
Spring Thaw May Trigger Floods; Calif. Drought Locked In
The Best View You’ll See of the Spring Equinox
A Cold U.S. Winter for Sure, but 8th Warmest Globally
White House Brings Together Big Data & Climate Change
Wood Burning for Home Heating Trendy in Northeast