The most sophisticated, comprehensive and succinct scientific account of the accelerating impacts of human activity on the world around us, from warming and rising oceans to the growing toll of heat stroke, was published Sunday by a United Nations panel. The picture that emerged from the 116-page synthesis of three blockbuster climate change reports was alarming. “The atmosphere and ocean have warmed, the amounts of snow and ice have diminished, and sea level has risen,” it reminds us, warning that warming caused by carbon dioxide pollution “is effectively irreversible.”

But the report was not an ode to a dying world. The synthesis of the Intergovernmental Panel on Climate Change’s (IPCC) fifth assessment since 1990 was brimming with advice and guidance. It quantified and explained difficult measures that governments and industry would need to take to prevent the disastrous levels of warming that would be assured if the globe’s current fuel-burning and forest-felling trajectory remains unchanged. 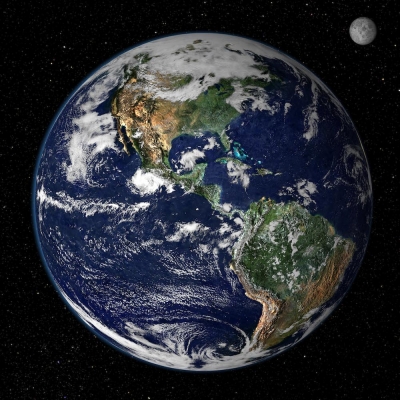 “We have the means to limit climate change and build a better future,” UN Secretary-General Ban Ki-moon said during a press conference as the IPCC released the report Sunday. “We must act quickly and decisively if we want to avoid increasingly disruptive outcomes.”

Scientists and international delegates spent the past week meeting in Copenhagen crafting and fine-tuning the report, which synthesized the findings from more than 30,000 scientific papers.

It comes at a critical time, with nations preparing to convene for climate treaty talks in Lima, Peru, next month. Those talks will be a prelude to negotiations in Paris a year later, when the first global climate treaty since the Kyoto Protocol is due to be finalized, promising to shape humanity’s future for countless generations to come.

Where we are now

Fossil fuel burning, cement production and deforestation has led to greenhouse gas levels that are unprecedented in at least 800,000 years, the report says. The effects of that pollution are manifesting in acidification of the oceans, declining snowpacks, rising sea levels and increasing temperatures on land and, in particular, in the seas. Each of the past three decades has been warmer than the decade that came before it. The surface of the planet's oceans and land masses has warmed by 0.85°C, or 1.5°F, since 1880. Seas are now 19 centimeters, or 7.5 inches, higher than they were in 1900.

The changes are having widespread impacts on humans and natural systems, with wildlife changing their geographic ranges and migration patterns, and harming crop growing more than they have helped it.

“Human influence on the climate system is clear, and recent anthropogenic emissions of greenhouse gases are the highest in history,” the report states. “Warming of the climate system is unequivocal, and since the 1950s, many of the observed changes are unprecedented over decades to millennia. ” 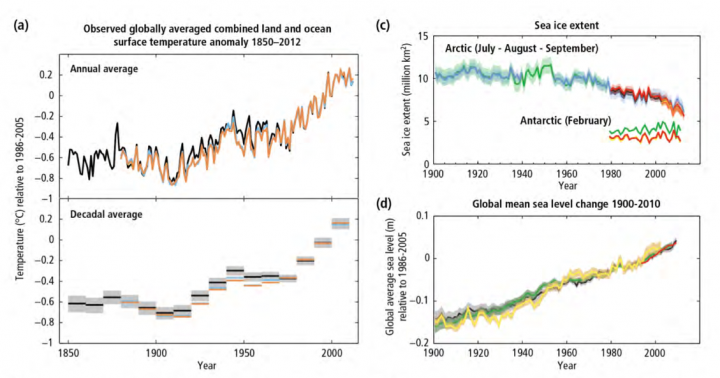 Here is how concentrations of the most important greenhouse gases, which have caused the changes shown in the charts above, have changed during the past 250 years. You can see that they have all been rising since the Industrial Revolution: 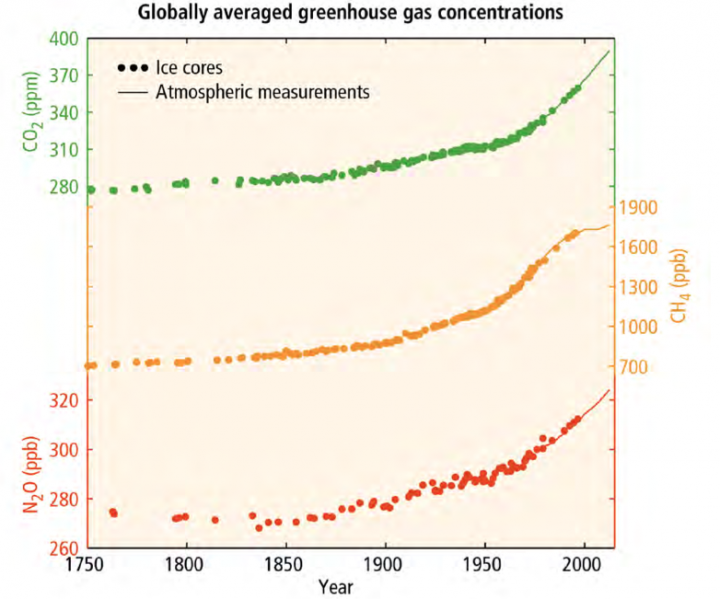 Humanity’s oleaginous fingerprints can be found smeared all over the climate. The following chart from the synthesis report compares humanity’s outsized role in warming the planet by releasing greenhouse gases (and in moderating that somewhat by producing planet-cooling pollution that acts like sunscreen) with the relatively minor influence of natural factors. 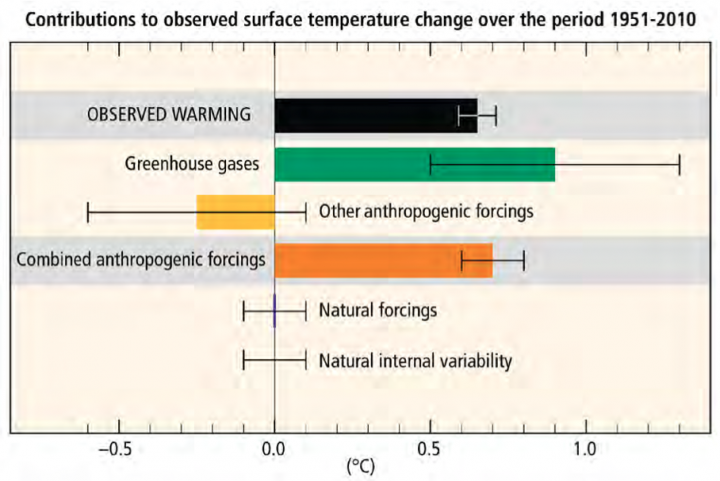 As seas rise and water and food supplies become less predictable, climate change is projected to continue to drive people from their homes, especially in low-lying areas, such as Pacific islands and vast swaths of coastal Asia. The poorest countries — those that have contributed the least to the problem of climate change — suffer higher exposure to extreme weather events linked to climate change than do wealthy countries, yet they lack resources to sufficiently cope with those events or to plan ahead for migration. And the report notes that the warming of the globe can have bloody consequences. “Climate change can indirectly increase risks of violent conflicts by amplifying well-documented drivers of these conflicts such as poverty and economic shocks,” it states.

Yet world leaders and their citizens still have a tremendous amount of power to influence the extent of future warming. If the world stays on its current fuel-burning binge, the report details some of the unimaginable impacts that it will endure. “Without additional efforts” to reduce climate pollution “beyond those in place today,” the report forecasts that temperatures by 2100 will rise to 3.7°C to 4.8°C above pre-1900 levels, roughly equivalent to a rise of 6.7°F to 8.6°F. That range is well outside the goal of a UN Framework Convention on Climate Change agreement to limit warming to less than 2°C. The world has a 50-50 shot of meeting that goal if carbon dioxide concentrations in the atmosphere are limited to 530 parts per million, the IPCC concluded. Current levels are about 400 parts per million — up from 280 parts per million before the industrial explosion of the past century and a half.

“Rising rates and magnitudes of warming and other changes in the climate system, accompanied by ocean acidification, increase the risk of severe, pervasive, and in some cases irreversible detrimental impacts,” the report states. “Future climate change will amplify existing climate-related risks and create new risks.”

What can we do?

The report notes the rapid development in recent years of climate adaptation efforts, such as improved coastal planning and infrastructure overhauls that respond to changing weather patterns and high tide marks. “People, governments and the private sector are starting to adapt to a changing climate,” it states. But the more we continue to change the climate, the more the “challenges for many adaptation options” will continue to rise. Simply trying to adapt to climate change, without taking steps to address the cause of climate change, was portrayed in the report to be a deeply dangerous tactic.

The report spells out mitigation opportunities — ways of limiting levels of climate-changing pollution and preventing warming from exceeding 2°C. Those opportunities include a huge boost in renewable energy to replace fossil fuel burning (which offers “co-benefits” of reducing health-harming pollution), retiring coal power plants or using nascent technology to capture and bury their carbon dioxide emissions, and reviving the forests and other biomes that help absorb carbon dioxide and stabilize the climate.

In the majority of hypothetical scenarios analyzed that kept global warming to less than 2°C, the share of “low-carbon” electricity in the global supply, such as that produced by solar, wind and nuclear plants, and by fuel-burning plants that use carbon capture and storage technology, increases rapidly from 30 percent today to more than 80 percent by 2050, and then 90 percent by 2100. “Decarbonizing” electricity supplies, which means reducing the amount of carbon that’s pumped into the atmosphere by power-producing facilities, is therefore described as “a key component of cost-effective mitigation strategies in achieving low stabilization levels” of greenhouse gases. Reducing demand for electricity, such as improving energy efficiency in homes, businesses, trucks and cars, can also “substantially” lower greenhouse gas emissions.

Regulations that could be used to limit greenhouse gas emissions are expanding considerably, the IPCC found. In 2012, 67 percent of climate-changing pollution was subjected to some kind of national legislation or strategy — up from 45 percent in 2007. Although “mechanisms that set a carbon price, including cap and trade systems and carbon taxes, can achieve mitigation in a cost-effective way,” the report notes that such programs have so far been implemented worldwide with “diverse effects,” with some caps being set too high to be effective. 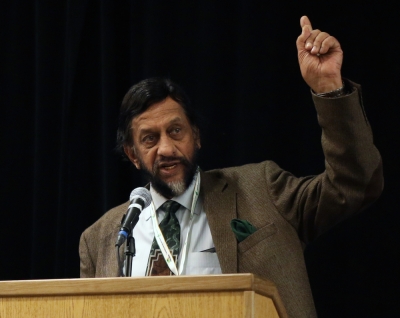 Overall, the report implicitly endorses the very UN climate negotiation process that it aims to inform — not for any specific achievements of the negotiations (such achievements have been sparse, and the report notes that the effectiveness of the Kyoto Protocol “has been questioned”), but because meaningful climate action could best be achieved through cooperation. “Because climate change has the characteristics of a collective action problem at the global scale, effective mitigation will not be achieved if individual agents advance their own interests independently,” the report states.

The urgency of the ongoing climate negotiations was emphasized Sunday by IPCC chairman Rajendra Pachauri. “To avoid the chaos of runaway climate change, we know that we need to dramatically reduce global emissions of greenhouse gases,” he said during a press conference. “The scientific community has now spoken. But we are passing on the baton to politicians [and] to the decision-making community.”