Greenland’s glaciers are more vulnerable to melting by warm ocean waters than previously thought, a new study of the topography of the bedrock under the ice finds. This clearer picture of the underpinnings of the miles-thick ice sheet, along with other recent studies that suggest parts of Earth’s polar regions are not as stable as once thought, could mean that current projections of future sea level rise are too low. 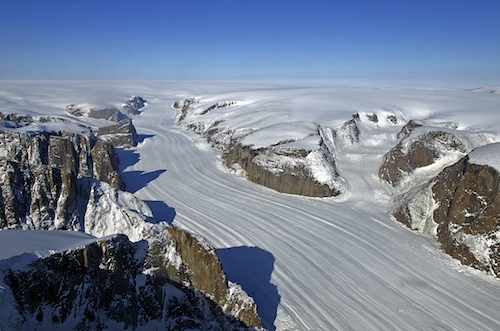 The new Greenland findings, detailed online May 18 in the journal Nature Geoscience, come on the heels of an announcement by the same group of researchers at the University of California, Irvine, that some of the largest and fastest-moving glaciers of the West Antarctic Ice Sheet have entered a phase of “unstoppable” collapse. The mechanisms driving the melt are different for the two ice sheets, though.

Unlike the Antarctic glaciers, which end in tongues of ice that float on the Southern Ocean seas, the glaciers of Greenland terminate with the land, butting up against the surrounding water. So instead of warm water melting the glaciers from below, as in Antarctica, the ocean waters melt the vertical fronts of Greenland’s glaciers. Scientists had thought that the melt of the Greenland glaciers would continue for a few decades, until the ice melted back to a point where the ground was higher than sea level and then would halt.

But the new study, which resulted in the most detailed topographic map of the periphery of Greenland to date, found that wasn’t the case: Valleys underlying many of the glaciers stay below sea level and extend much farther inland than previously suggested, so warm ocean currents that have migrated northward with the changing climate could eat away at the ice for much longer than current climate models suggest. “It will take much longer for these glaciers to lose contact with the ocean,” study author Mathieu Morlighem, of the University of California, Irvine, told Climate Central. 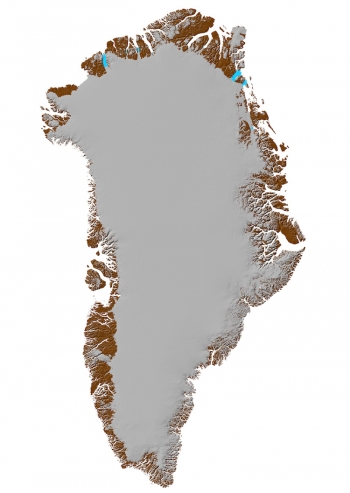 That extended contact means that the glaciers “will retreat faster and farther inland than anticipated” in current models, the study authors wrote, including those used in the latest report from the Intergovernmental Panel on Climate Change. That report estimated that sea levels, which have already jumped 7.5 inches since the beginning of the 20th century, could rise by anywhere from 1 to 13 feet by 2100, an increase from the previous report released in 2007. The impacts of that extra water are already being felt. Low-lying islands are seeing their land area reduced, and flooding during storms like Hurricane Sandy and Typhoon Haiyan have been exacerbated. Further sea level rise could see some islands and coastal areas — home to an increasing share of the world’s population — disappear beneath the waves and would make storm-prone areas more dangerous to live in.

Just how fast the melting of these susceptible glaciers could proceed and how much extra sea level rise they would actually contribute isn’t known for sure, but it could be substantial, Morlighem, who plans on running revised projections of the melt, said.

“What we know for sure is that it’s more vulnerable, it will continue for a longer period of time,” he said.