Another month, another carbon dioxide record. This time the record extends beyond the rocky slopes of Mauna Loa, Hawaii, home to the most storied carbon dioxide record, and includes 39 other sites around the globe to paint a troubling picture of a greenhouse gas rise with no signs of slowing down.

For the first time since record keeping began, carbon dioxide levels have surpassed 400 parts per million (ppm) globally, according to newly published data for March. CO2 emissions are the main driver of climate change and have risen more than 120 ppm since pre-industrial times. The planet has warmed 1.6°F over that period as well.

This isn’t the first time 400 ppm has made news. In May 2013, CO2 measurements taken at Mauna Loa surpassed 400 ppm for the first time. Measurements have been taken continuously at the site since 1958 and present the longest running record of atmospheric CO2 on the planet.

In April of last year, 12 observatories in the northern hemisphere, including Mauna Loa, averaged 400 ppm for the first time on record. And Mauna Loa rang in 2015 by registering a 400 ppm measurement, the earliest occurrence on record for the site.

But what makes the new record more profound is that 400 ppm is officially part of the global record. Concentrations will likely remain above that mark until May when blooming plants in the northern hemisphere start to suck CO2 out of the air. 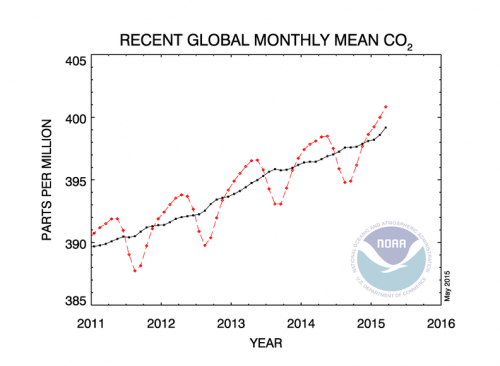 The reason it has taken a bit longer for the global measurement to catch up with the northern hemisphere record is due to a handful of factors. The main reason is because southern hemisphere CO2 measurements lag behind their northern counterparts because there are more sources of human CO2 emissions in the northern half of the globe. Though CO2 moves around in the atmosphere, it takes time to spread.

Regardless of location, all CO2 measuring stations have shown an upward trend with little signs of slowing down.

The 400 ppm milestone is largely a symbolic one. But the new global data, which comes courtesy of the National Oceanic and Atmospheric Administration, serves as an important reminder that while CO2 emissions stabilized in 2014, that’s not the same as dropping to zero. As a result, CO2 continues to pile up in the atmosphere.

The only ticket to reducing the amount of CO2 in the atmosphere is to cut emissions completely. And that’s a long ways off.

You May Also Like:
The Surprising Link Between Fjords and Carbon
U.S. Hurricane Drought ‘A Matter of Luck’
Intense Wildfire Season Expected in West
Transportation, Buildings Hold Key to Calif. Climate Goals