The U.S. may just be climbing out of the freezer, but Australia has been sweating through a major heat wave to start the year. Heat records fell across a large part of the country in the first week of the New Year. The warm weather is currently centered over sparsely populated Western Australia, but it could hit major population centers along the east coast by late next week.

The Australian Bureau of Meteorology released a special statement to chronicle the extent of the heat wave and its movement. While noting that it didn’t affect as wide an area as the January 2013 heat wave, the statement said the heat wave has been, “highly significant with substantial areas having their hottest day on record.” The heat wave comes on the heels of Australia’s hottest year on record during which a slew of records were shattered, including the country's hottest summer. 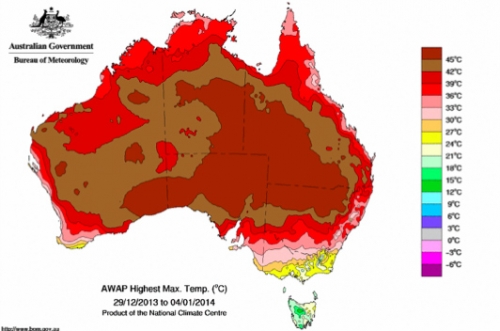 A map showing the highest temperatures recorded in Australia between Dec. 29, 2013-Jan. 4, 2014.
Source: Bureau of Meteorology.

During the most recent heat wave, dozens more records were set, including some by large margins. Narrabri, located about 320 miles northwest of Sydney, saw the thermometer hit an eye-popping 118°F on January 3. That surpassed the previous record by 6.5°F, which is the largest margin for an all-time high temperature record at an Australian weather station with 40 or more years of data. In Gunnedah Research Center, located 265 miles northwest of Sydney, temperatures rose to 114.6°F. That topped the previous high by 5°F. The station has records going back 76 years and is part of Australia’s long-term climate network. Overall, 34 locations across the country with 40 years or more of data had their hottest day on record.

Adverse effects of the hot weather have been felt across Australia. Reports indicate that 100,000 bats dropped dead in Queensland. Ranchers have also been forced to slaughter more cattle, and Australia’s herds could be at their lowest level in four years, according to Reuters. The Australian Department of Agriculture has also warned that with temperatures running 16–20°F above average for Queensland, South Australia, and Western Australia, wilted crops and increased fire danger are major concerns.

The heat was particularly overwhelming in the state of Queensland. The state had its ninth-hottest day on record on December 29, topping out at 106.3°F. However, it set an all-time record on January 3 when the maximum average temperature across the state was a sweltering 107.3°F.

In addition, 12 stations across Queensland, New South Wales, and South Australia all saw temperatures rise above 118.4°F over the first three days of the New Year. The hottest temperature recorded over that stretch was 120.7°F, which occurred in Moomba, South Australia on January 2.

Since then, the heat has moved to the territory of Western Australia. The Bureau of Meteorology has a few pockets on its forecast high temperature map shaded deep purple, a color it famously added to its temperature maps during last year's January heat wave. Those areas in far Western Australia are forecast to reach near 122°F on Friday afternoon. 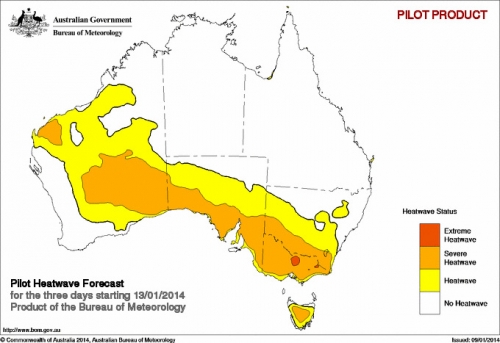 A map showing the heat wave forecast for Australia starting on Monday.
Source: Bureau of Meteorology.

A “blocking” area of high pressure has kept high temperatures mostly at bay from Sydney and Melbourne, Australia’s two largest cities, but the respite could come to an end next week. By Monday, the Bureau of Meteorology puts Melbourne on the fringes of a severe heat wave. The Sydney Morning Herald reports the city could feel the heat by January 16.

Karly Braganza, manager of climate monitoring at the Bureau of Meteorology, told the Associated Press that climate change may have played a role in the current heat wave. Research suggests that manmade climate change has increased the odds of heat waves around the globe. Last year’s scorching summer and record heat wave in Australia were attributed in part to an increase in atmospheric greenhouse gases from to human activities.